In the name of love: U2 gear up for start of world tour 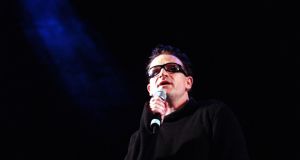 Speaking in Vancouver ahead of the first date of U2’s world tour on Thursday, Bono said marriage is not owned by any church, but is instead owned by the community who should decide who it does and does not apply to. File photograph: Alan Betson/The Irish Times

Speaking in Vancouver ahead of the first date of U2’s world tour on Thursday, Bono said marriage is not owned by any church, but is instead owned by the community who should decide who it does and does not apply to.

The definition of marriage had changed through the millennia, he pointed out. Jesus was not married and many characters in the Bible had several wives.

He described commitment as “one of the most impossibly great human traits, the hardest to hold on to.

“Anything that enshrines that is a wonderful thing. Marriage is nearly impossible. Wherever it is occurs it should be encouraged.”

The band confirmed that their iNNOCENCE + EXPERIENCE stage show will not play Dublin in its present form as there is no arena big enough to hold it.

“There may be acoustic shows. We will play the (3Arena) but we can’t play the present show,” he said while confirming that Music Generation students who were funded by U2 will also be involved in the show.

The Edge said playing the full show in Dublin wouldn’t make sense. “It would be a terrible venue for it. We won’t be able to bring this particular show to Dublin, but we’re definitely going to be doing Dublin. We just haven’t figured out how.”

Bono described the iNNOCENCE + EXPERIENCE tour as a “DNA mindfuck” with the song Cedarwood Road, named after the road in which he grew up, figuring prominently. His son Elijah will play the young Bono in a film accompanying the show, which will also feature his old bedroom.

He said the bedroom in 10 Cedarwood Wood represents the “incubator” that every teenage boy’s bedroom is. “You will see me as a teenage boy in that bedroom. It will look like me, but it will not be me. It will be my son Elijah.”

Bono joked that his bicycle accident in Central Park in January was a “deep offensive to my machismo” and he was rescued by a New York firefighter.

His injuries have left him with a left hand that “doesn’t feel like my own”, he said and unable to play the guitar.

Another theme in the show will be the Dublin bombings of 1974 while the theme of non-violence will continue with Sunday Bloody Sunday.

The band opted to continue the tour despite the death of drummer Larry Mullen Jr’s father Larry Snr last week. The Edge said it would be “cathartic” for the band to carry on and that’s what the drummer wanted.

He said the band have some 60 songs to choose from and the set will be between 24 or 25 song every night. He suggested they will be looking at playing songs live that they have never played before, such as the Ground Beneath Her Feet from the film The Million Dollar Hotel

The Edge said they were very happy with the new speaker system they have which will see the sound coming from the roof on top of the audience instead of directly from the stage. “I think it will give us the best sound we ever heard.”

He said the band had to reconfigure the show because of Bono’s inability to play the guitar. “He has an amazing sound and instinct especially when it comes to the more aggressive songs. A couple of times I’ve been going into a solo saying, ‘shit, where’s Bono?

“Because we have a lot of time to prepare, we’ve been able to work the arrangements.”