How do you make contact with Enya to ask can you use her music? A smoke signal?

After appearing on the soundtracks for Derry Girls and Eighth Grade, the famously private singer has struck a chord with millennials 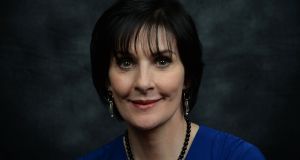 In every way you can think of, Enya is about as far from Charli XCX, Nicki Minaj and Ariana Grande as it’s possible to get. And yet the Donegal singer has found herself bang in the middle of not one, but two major pop culture moments of late.

Earlier this month, her single ‘Caribbean Blue’ provided the soundtrack to the momentous final scene of Channel 4’s hugely popular teen comedy series Derry Girls. A mass outpouring of love for the singer was unleashed on social media, with one Twitter user noting: “There will be a serious amount of Enya steam on Spotify over the next 24 hours.”

As it stands, the sonorous lilt of the former Clannad singer is the perfect foil to composer Anna Meredith’s mesmerising, pulsating dance score. ‘Orinoco Flow’ only serves to make a standout scene, in which 13-year-old Kayla (Elsie Fisher) sits rapt in front of a ceaseless on-screen torrent of Snapchat stories and Instagram posts, all the more compelling.

This song is so much cooler and stranger than I remember it being, and it’s also very deep

‘Orinoco Flow’ is a regular sound in Irish society, but it’s been a good 31 years since the release of Watermark which sold 80 million records worldwide.

The film’s 27-year-old writer/director Bo Burnham, himself a famed YouTuber and comedian, went out of his way to source the specific song, going so far as to personally write to Enya himself.

“I was thinking a lot about the score,” he told the Huffington Post. “Then, during production, I thought, ‘What about Enya?’ I listened to ‘Orinoco Flow’ and was like, this song is so weird. This song is so much cooler and stranger than I remember it being, and it’s also very deep.”

Burnham decided the tune, with its repetitive hook (“sail away, sail away, sail away”), would make the sequence “feel religious, which was what I wanted it to feel like,” adding, “browsing the internet for [Kayla] is… spiritual.”

Speaking about securing the rights to the song, he added: “I had to write a ‘Dear Enya’ letter so that we could afford it. I thought I was going to have to tie it to a salmon and put it in a river. Like how do you make contact with Enya? A smoke signal?”

Burnham clearly made successful contact with Enya and the rest is history, and the resulting sequence has effectively resulted in the musical renaissance that no-one saw coming.

Dr Aileen, Dillane, an ethnomusicologist at the University of Limerick, notes that Burnham’s decision to reach out to Enya was a strong one.

“That ambient sound is perfect for cinematic music,” she notes. “It’s also strong, feminine and ostensibly timeless so in a movie with a strong yet unsure female protagonist, it is ideal. But there’s another possible layer to this also.

“Enya’s “Orinoco” Flow from 1988 is going to conjures memories of other ‘coming of age’ movies by association, like ‘The Breakfast Club’ (1985). So though ‘Eight Grade’ is ostensibly aimed at millennials, it is also for their parents and creates a kind of intertextual reference and, by extension, inter-generational feel-good factor by illustrating the truism that essentially we all go through the same rites of passage.”

Singer Shilpa Ray was recently moved to post: “Millennials have a fixation with Enya that I will never understand.” Even Vice magazine posed the question in a longform read: ‘How Exactly Did Enya Become One Of The Richest Musicians In The World?’.

“Enya is as much of a byproduct of the inexorable rise of the unreal as the Marvel movies, J.K. Rowling, and Minecraft, but more importantly than that, she is the ultimate castle-dwelling proof that you can shield yourself from the unrelenting horrors of life with art,” posits the essay.

It does beg the question: just what is it about this publicity-averse 57-year-old that has captured the imaginations of millennials and Generation Z?

How can it be that one of the industry’s most private and enigmatic artists has touched a nerve with generations for whom oversharing confessionalism is like fluoride in the water? Is her music a sonorous, womb-like salve in a rough and uncertain world?

There’s certainly no chance of her young fans ever getting up close and personal with the Donegal singer. She plays live only intermittently, and doesn’t tend to tour. She had made inuring herself from the slings and arrows of the industry her priority. She’s not likely to be involving too many fans on social media, either; of the 53 Tweets on her official account, each one of them is strictly business. Is it a case of the less you reveal, the more people want to know?

In the most unlikely turn of events, new age music is generally enjoying a rebirth. For years, it had been derided as naff nonsense that was just about fit for the yoga studio or spa treatment room. But not anymore.

“It used to just be old Berkeley hippies and quiet, unassuming, middle-age types, but now I see lots of millennials and folks in their 20s and 30s shopping it, especially the LPs,” Michael Henning of the legendary Amoeba Records shop in California recently told the Guardian. “The stigma that it is ‘uncool’ music has disappeared, and it is now even seen by many younger folks as very cool.”

Just as they have done for decades, younger music fans also tend to gravitate to music by ‘outsiders’, so that they can lay claim to it afresh.

“Nostalgia certainly plays a role in something like Derry Girls,” observes Dr. Dillane. “In the case of Enya, however, it might be more to do with the way that music works in the present for millennials eager to explore soothing music that accompanies yoga or mindfulness meditation activities.

“Enya is also often categorised as world music, ambient music, or even New Age. In the case of the latter, like many trends, it has come around again, as part of a general appetite for other genres of the 80s and 90s, which is also when global pop/world music emerged as a strong contender in the charts, along with an appetite for what was loosely called ‘Celtic’ music.

“Finally, if you consider how sexuality is something that has become more fluid amongst this generation, so too, arguably, have musical tastes. This is the Spotify generation, less tied to albums, genres, and eras, and more open to the any sound that appeals, without prejudice, and with an ear to experimentation.”