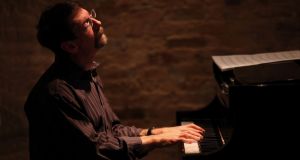 Fred Hersch, one of the most respected musicians on the New York jazz scene, plays the Bray Jazz Festival

Ten years ago, as he lay recovering from an illness that many thought would end his life, let alone his career, Fred Hersch’s doctor said something that resonated with him and would become the title of the pianist’s courageous, searingly honest memoir, published in 2017: “good things happen slowly”.

It was a reference to the long road to recovery that lay ahead following the medically induced coma that saved his life, but it might equally be applied to Hersch’s extraordinary journey as a musician. Before his illness, the Cincinnati-born pianist was already one of the most respected musicians on the New York jazz scene, but his re-emergence over the last decade has been remarkable by any standard, not just for the glorious return of his piano technique, but for the depth and extraordinary beauty of the music that has resulted.

“I was pretty much as far down as you can get at the end of the summer of 2008,” says Hersch, speaking down the phone from his loft in downtown Manhattan. “When you’ve been out, unconscious for a couple of months, your muscles are just not working at all. So when you come out, the first thing you do is get the big muscles going, you know, walking and sitting up, things like that. But the fine motor co-ordination muscles, like fingers, they always take the longest to come back. There were times when I doubted that I would ever be able to play again, certainly not at an elite level. There were definitely very dark moments.”

And yet not only did Hersch recover his technique, but he seemed to gain something. A series of live recordings made on the hallowed stage of the Village Vanguard have been revelatory; the sound of a great musician now perhaps liberated from whatever demons might have beset his younger self and able to channel a sort of poetic wisdom that has drawn extravagant praise from the critics and secured his place amongst the most respected jazz musicians of his generation.

The pianist is reluctant to ascribe his new status to his near-death experience alone, but he admits that there is something about his playing today that is different.

“I would say that in general there is more allowing and less trying,” he says carefully. “I’m allowing things to happen instead of trying to make them happen. But that may just be just a function of getting older and feeling comfortable in your own skin. When I was that down and came back, the fact that I could play at all was kind of amazing, so my expectation wasn’t high. I have been very pleasantly surprised by everything that happened in this last 10 years. It’s all, as they say, gravy.”

Not that Hersch was what you would call obscure. After cutting his teeth on the local Cincinnati scene, and a brief spell in Boston, he arrived in New York in the late 1970s and very quickly established himself as an in-demand sideman and a regular at Bradley’s, the now defunct club in downtown Manhattan where some of the city’s best jazz musicians congregated.

“Being a New York side man for a while, playing with Joe Henderson and Stan Getz in my 20s, that was all great on the job training,” he says. “Just to play behind these people night after night, to see how they structured their sets, how they structured their solos, to hear them on a good night, and maybe on a not so good night, and what they did with that – it was the best learning experience possible. I feel like that was my graduate school.”

Ironically, for a largely self-taught pianist, Hersch also gained a reputation as a teacher and mentor to a younger generation of pianists, and he has seen some of his former students, like Brad Mehldau and Ethan Iverson, ascend to the very top of the jazz tree.

“I figured things out for myself,” he says of his own education. “I listened to records, I played with the older guys, I got my butt kicked on the bandstand. Maybe I would have benefited in different ways from a more academic approach, but honestly it never occurred to me when I was young and starting out to ask the older players around town for a piano lesson, I just went about it my own way, and to that extent, maybe that has helped me to carve out an individual style over the years”.

In 1993 Hersch announced to the jazz press that he was gay and HIV positive. He was one of the first prominent musicians to come out in the very heterosexual world of American jazz. Since then, he has become a passionate Aids activist, raising hundreds of thousands of dollars for charities like Performing Arts Against Aids and Equity Fights Aids.

“More and more [jazz musicians] are coming out and I like to think that I had something to do with that,” he says. “I mean people might have said, ‘well Fred came out and it doesn’t seem to be hurting him, he seems to be doing fine’.”

In his memoir, he writes candidly about how coming out can also involve emerging from a musical closet and finding one’s own voice.

“The most important thing about me is not my sexual orientation,” he says carefully. “It’s part of me, and it doesn’t mean that just because you’re gay that you play ‘pretty’ music. But I think ultimately, you have to be comfortable in your own skin if you’re really going to express yourself, and if you have part of yourself kind of walled off, I just don’t think that is conducive to really developing your full range of expression as an artist”.

Now in his early 60s, Hersch knows he’s lucky to be alive, and luckier still to have found a wide and appreciative audience for his music at this stage in his career. A curious mix of confidence and deprecation, he’s not deaf to the breathless praise that his music has attracted in recent years, but he still finds himself wondering how he got here.

“I think of that even today. Last Saturday night, I played a duo concert with [saxophonist] Charles Lloyd and, you know, I bought his album Forest Flower when I was 18, and 45 years later I’m playing with this guy for the first time. It was very special and kind of moving in a way, one of those pinch-me moments, and I’m glad I waited all these years for this to happen because I wasn’t intimidated. I felt like I could be myself. I wasn’t trying to prove anything to him.”

That Hersch is still alive is a testament to his resilience and a tribute to the people who supported him through his illness. That he is sounding better than ever is a gift to the world and perhaps proof that good things really do happen slowly.

Compared to others, Bray Jazz Festival plays a quality not quantity game, celebrating jazz as a contemporary artform in all its diversity, from heavyweight Americans to European experimentalists, with some exotic outliers and creditable support for the domestic scene up and down the bill. For the festival’s 20th anniversary, they’re also taking the show “on the road” with satellite gigs in Russborough House, Tinahely Courthouse, Arklow and Roundwood. Check brayjazz.com for details.

The opening concert in the Mermaid from New York giant Fred Hersch will draw the crowds, but also check out some industrial psychedelia from Swedish power trio FIRE! and post-folk from Danish-Irish multi-instrumentalist Dowry. The Harbour stage includes sets from leading Dublin quartet RedvideR and drummer Conor Guilfoyle’s Octet of rising stars.

Legendary US guitarist John Scofield’s Combo 66 is a heavyweight ensemble that will knock them out at the Mermaid, while elsewhere there’s global experimentalism from French quartet No Tongues, old songs in new ways from Swiss/Swedish trio Speak Low, and a post-rock late show from Kenosha Kid. The Harbour stage runs from mid-afternoon with sets from pianist Greg Felton’s creative trio and soul jazz from guitarist Paj.