Sharon Osbourne, Marina Abramovic and past winner Conchita among stars criticising ‘affront to Palestinians and Israelis’ 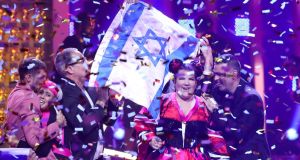 Public figures including Stephen Fry, Sharon Osbourne, Marina Abramovic and the pop mogul Scooter Braun have signed a letter speaking out against a proposed boycott of this year’s Eurovision Song Contest, which is to be held in Tel Aviv in May.

Their letter states that Eurovision’s “spirit of togetherness” across the continent is “under attack by those calling to boycott Eurovision 2019 because it is being held in Israel, subverting the spirit of the contest and turning it from a tool of unity into a weapon of division”.

It continues: “We believe the cultural boycott movement is an affront to both Palestinians and Israelis who are working to advance peace through compromise, exchange, and mutual recognition. While we all may have differing opinions on the Israeli-Palestinian conflict and the best path to peace, we all agree that a cultural boycott is not the answer.”

The winner of last year’s contest, Netta Barzilai, also criticised the boycott movement, saying that to snub such a popular world event celebrating diversity would be akin to “spreading darkness”. “Being on the same stage, no matter what your religion or ethnicity or colour, from all these countries, from all these cultures, this is a festival of light,” she said.

The more than 100 signatories to the anti-boycott letter, which was organised by the nonprofit Creative Community for Peace, also include Gene Simmons of the band Kiss, the comedian Al Murray, the Countdown copresenter Rachel Riley and the former Eurovision winner Conchita.

Ari Ingel, the nonprofit’s director, said: “The members of the entertainment industry who have signed this statement, along with the thousands of individuals who have endorsed its message, all believe in building bridges through music and the arts as a means to achieving greater understanding and peace in the region.”

Their letter comes in response to widespread calls for participating artists and broadcast partners to boycott the contest. The Boycott, Divestment, Sanctions movement has claimed that Israel is “shamelessly using Eurovision as part of its official Brand Israel strategy, which presents ‘Israel’s prettier face’ to whitewash and distract attention from its war crimes against Palestinians”.

Last month the Ireland-Palestine Solidarity Campaign led a demonstration to protest against RTÉ’s participation in this year’s event.

Eurovision producer Michael Kealy said in response that RTÉ was a nonpolitical organisation and could not be seen to take sides in relation to the Israeli-Palestinian conflict. “We are not an organisation that makes political statements. People are perfectly entitled to have a view on this and to protest against it, but it is misguided. This is a song contest. We are not there to make statements or to solve the Middle Eastern conflict.”

Eurovision may be light entertainment, but we cannot ignore Israel’s systematic violation of Palestinian human rights

In response the BBC underlined its commitment to airing the event: “The Eurovision Song Contest is not a political event and does not endorse any political message or campaign. The competition has always supported the values of friendship, inclusion, tolerance and diversity and we do not believe it would be appropriate to use the BBC’s participation for political reasons. Because of this we will be taking part in this year’s event. The host country is determined by the rules of the competition, not the BBC.”

Roger Waters has urged Madonna to pull her planned performance at the event. She has not responded. In September 2018 he also wrote an open letter to the 41 finalists asking them to stand “shoulder to shoulder” with the Palestinian people. So far no competing nation has rescinded its participation because of the competition’s location. In February Ukraine pulled out after its competitor selection process became entangled in political tensions with Russia.

The contest is being held in Israel following the country’s win in 2018, for the pop singer Netta Barzilai’s track Toy. The Israeli prime minister, Binyamin Netanyahu, had wanted the contest to be staged in Jerusalem, but the nationality of the city is disputed, with Palestinians claiming an Israeli-occupied area as a potential future capital city. Instead Tel Aviv will host the contest, which is scheduled for May 18th. Sarah McTernan will represent Ireland, with the song 22. – Guardian; additional reporting: Associated Press