Ultimate guide to biggest Irish gigs and festivals of summer 2019

From Belfast to Cork and Cardi B to Bon Jovi, it’s time to start planning 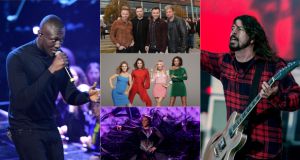 It’s time to air out your mouldy tent that’s shoved on top of your wardrobe and to hose down your crusty, mucky wellies that live under your bed. You may not feel like you’re ready but festival season is upon us. This summer, over 50 festivals, outdoor music events and concert series are taking place across the country, with the people of Ireland experiencing all of the highs and the lows that go with it, George Ezra seemingly taking up a semi-permanent residency here and the Spice Girls and Westlife sinking back into the mould of their former glory with gigs in Croker.

Entering the race this year are newbies Eastbound (May 7th-12th), the Dublin city centre music festival for emerging acts, Love Sensation (August 17th and 18th), the LGBT+ pop festival brought to you from the people behind Mother Dublin and the Pride Block Party (June 29th), in Dublin’s Royal Hospital, and the family-focused Kaleidoscope (June 28th-30th), a spin-off from Electric Picnic, in Wicklow’s Russborough Estate.

We won’t be stuck for things to do this summer but by the time September rolls around, we’ll never want to leave the house or look at a portaloo ever again.

May 7th-12th; Dublin; €13.50; ticketmaster.ie
Eastbound is the new festival that puts up-and-coming artists like Dundalk’s post-punk band Just Mustard, indie-pop singer Maisie Peters and R&B star Kara Marni at the forefront. Sprawling across six venues, no one has to camp out.

It Takes A Village

May 24th; Croke Park, Dublin; €59.50-€191; ticketmaster.ie
In exchange for a stadium tour, we have to accept the Spice Girls as a quartet. Minus Posh, whose plan B has worked out nicely, this is one of the biggest returns in pop. Tickets are still available.

May 24th-26th; Belvedere House, Mullingar, Co Westmeath; €95.25-€181 life-festival.com
Life has the honour of being the first camping festival on our list. Claiming to be Ireland’s most revered festival for electronic music, they also dabble in grime and hip hop, with Bicep, MK and Giggs headlining.

May 25th; Pairc Uí Chaoimh, Cork; €75-€139; ticketmaster.ie
In September, Rod Stewart released his 30th album Blood Red Roses to lukewarm reviews but, thankfully, he has some other tunes up his sleeve to entertain.

May 30th-June 2nd; Ballyshannon, Co Donegal; €30-€70; rorygallagherfestival.com
For the last 17 years, fans and tribute acts from across the world congregate in Rory Gallagher’s hometown to celebrate the blues guitarist who passed away in 1995.

May 30th-June 3rd; Kilkenny; thecatlaughs.com
This cat has been laughing solidly for 25 years and to ring in a new era, Alison Spittle, Sally Phillips, Adam Hills, Tommy Tiernan Dara O’Briain and a slew of others are booked in for chuckles, giggles and guffaws.

May 31st-June 1st; Beaulieu House, Co Louth; €50-€130; vantastival.com
Vantastival is celebrating “a decade dealing craic” and they’ve called in Irish acts Junior Brother, Lisa O’Neill, Sharon Shannon, Wallis Bird, Join Me in the Pines and more to dish it out. Camping and campervan options are available.

May 31st-June 2nd; St Anne’s Park, Dublin; €49.90-€51.96; ticketmaster.ie
Ticket-shifting reliables Kodaline (May 31st and June 1st) and Chic (June 2nd) are booked in for the Clontarf park’s first outing as a music venue. James Morrison supports Kodaline on both nights and Kaiser Chiefs are supporting Chic.

June 8th; Slane Castle, Co Meath; €93.19-€284.01; ticketmaster.ie
After a nine year absence, Metallica make their return to Ireland with their Worldwired Tour. Promoters strongly encourage people to use public transport to and from the event to cut back on traffic. This is a non-camping event but there are camping options available in the area.

Live at the Marquee Concerts

June 13th; RDS, Dublin; €79.50; ticketmaster.ie
Fleetwood Mac are making six European stops this summer and Dublin luckily made the cut. Lindsey Buckingham won’t be there as he was, eh, fired from the band last year so joining Mick Fleetwood, John McVie, Stevie Nicks and Christine McVie is Mike Campbell (Tom Petty and the Heartbreakers) and Neil Finn (Crowded House).

June 15th & 16th; RDS, Dublin; €93-€115; ticketmaster.ie
Their first tour in six years, Bon Jovi are returning to the RDS, a venue they’ve played five times before. In an unusual pairing, Welsh act Manic Street Preachers are supporting them on both nights. Saturday’s show is sold out but tickets are available for June 16th.

June 18th; RDS, Dublin; €69.50; ticketmaster.ie
When Pink puts on a show, she’s puts on a show. Her Beautiful Trauma tour features aerial stunts, an inflatable Eminem (apparently), pyrotechnics and consistent live vocals. Unfortunately, after that hard sell, this show is totally sold out.

June 21st-23rd; Bundoran, Co Donegal; €54.90-€149.90; seasessions.com
With Sigrid, Clean Bandit and Two Door Cinema Club headlining the surf, sea and music festival, pop plays a prominent role but with Sugar Hill Gang, Kormac and Bitch Falcon on the bill, all tastes will be catered for. Camping and glamping options are available.

July 5th-7th; Palmerstown House Estate, Co Kildare; €107-€197; foreveryoungfestival.ie
1980s icons the Human League, Kim Wilde, Marc Almond, T’Pau and Midge Ure are on the bill for Ireland’s first 1980s festival. Camping is optional (with VIP camping and glamping on offer) and shuttle buses will be running to and from the Naas venue each day.

July 5th-7th; Marlay Park, Dublin; €79.50-€199.50; longitude.ie
Having cancelled last year’s appearance to focus on her pregnancy, Cardi B finally makes her Irish debut. Joining her on this hip-hop and R&B heavy, non-camping weekend is Chance the Rapper, ASAP Rocky, Anne-Marie, Aminé and H.E.R. Kids, leave the parents at home. This one is for you.

July 6th-14th; Milltown Malbay, Co Clare; scoilsamhraidhwillieclancy.com
As trad musicians from around the world attend the Willie Clancy Summer School, the local pubs spill over with music and music lovers. By day, the musicians study (for a €140 fee) and by night, the rest of us get to enjoy their education.

July 14th; Nowlan Park, Kilkenny; €162-€189; ticketmaster.ie
This double whammy is just one of two that Bob Dylan and Neil Young have announced for this year, with the first outing taking place in London’s Hyde Park on July 12th. Fans are expected to travel from all over the world for this but tickets are still available to buy.

July 19th-21st; Blessington Lakes, Co Wicklow; €65-€155; knockanstockan.ie
This camping festival uses the nooks and crannies of the Wicklow Mountains and lakes to lend stages to emerging Irish and international acts. Powpig, Bouts, Thumper and Joshua Burnside are some of the Irish acts confirmed.

August 2nd-4th; Curraghmore Estate, Co Waterford; €70-€208; alltogethernow.ie
Back for a second year, John Reynolds’s final contribution to the Irish music scene is one of the most anticipated camping festivals of the year. Sold out already, its line up boasts Patti Smith, The National, Pussy Riot and Father John Misty.

August 2nd-4th; Waterford City; spraoi.com
The street arts festival is set to brighten up the city of Waterford with parades, music, creative workshops, murals and theatre once again for 2019.

August 16th-18th; Killyon Manor, Co Meath; €182-€204; anotherlovestory.ie
The cosiest and possibly the loveliest festival returns for its fifth year. Christian Loffler, the Redneck Manifesto, Lubomyr Melnyk and Maria Somerville are among the first acts announced and Glasshouse Ensemble will perform Holocene: The Music Of Bon Iver.

August 19th and 24th; Boucher Road Playing Fields, Belfast; £40-£49.90; ticketmaster.ie
The day-to-day breakdowns for Vital could not differ any more. Foo Fighters will take care of business on August 19th and, leaning towards chart-friendly acts for teens, Timmy Trumpet, Jonas Blue, Fedde Le Grand and MaRLO are playing on the 24th.

August 21st; RDS, Dublin; €79.50; ticketmaster.ie
Following on from their Belfast gig, this is the first time that Foo Fighters have played Ireland since their 2015 Slane Castle appearance. This event is completely sold out but tickets for their Belfast gig are still going.

August 22nd; RDS, Dublin; €85.75; ticketmaster.ie
Having just played to a full house in Dublin’s 3Arena in February, Post Malone is bringing his blend of sad rap to the RDS for his first headlining outdoor gig in Ireland.

August 30th-September 1st; Stradbally Hall, Co Laois; €95-€205; electricpicnic.ie
Sold out since December, the Picnic holds onto its title as the most in-demand music festival in Ireland. While headliners the Strokes, the 1975, Florence and the Machine and Hozier have their draw, the teen sensation Billie Eilish is the act everyone actually wants to see.

August 30th-September 29th; Lisdoonvarna, Co Clare; matchmakerireland.com
Switch off your dating apps and let Willie Day do the work for you. Join the 40, 000 people who descend on Lisdoonvarna every year to have a dance and maybe fall in love. Or lust, at the very least.

Sounds from a Safe Harbour

September 10th-15th; Cork; soundsfromasafeharbour.com
Rounding up a summer of festivals, this year’s festival will see more collaborations by PEOPLE (37d03d) and immersive music, dance, visual art and conversation events spilling out across the city, with plenty of free events to explore.

‘I feel ashamed to be Irish’ – David Brophy
7

Love/Hate is returning to RTÉ on Friday nights. Why did we love it so much?
9