Coronavirus: I used to think Brexit was our biggest crisis. Now I’m nostalgic for it

Irishman in London: Many of us immigrants are staring down financial and existential crises 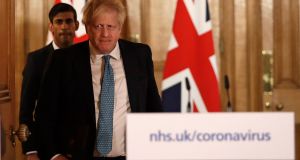 British exceptionalism is alive and well. While the rest of Europe went into lockdown, the UK chose to carry on with business as usual for days, until British prime minister Boris Johnson’s partial climb down earlier this week. Walking around London over the weekend felt like the anti-28 Days Later: like if Cillian Murphy awoke in a world ravaged by a pandemic, only to find London’s bars and restaurants heaving with revellers, downing pints and spluttering into each other’s faces. If a zombie horde approached London today, it would probably turn around and flee for its own safety.

London is now the epicentre of Britain’s Covid-19 crisis. While the British government is now discouraging citizens from visiting bars, how much damage was caused by their failure to act sooner? And why haven’t they gone as far as other European nations, even now? On Good Morning Britain on Tuesday when challenged on why the UK hadn’t closed schools like Ireland had, celebrity GP Dr Hilary Jones said: “The Republic of Ireland doesn’t have a health service, so they must be very worried”. Though you might be forgiven for thinking your visit to an Irish hospital was a bad trip, you were not hallucinating. The Health Service Executive (HSE) definitely exists, whatever its problems. Whether Jones is just profoundly ignorant or was deliberately spreading misinformation I do not know, but his comment highlights the attitude that has helped exacerbate the crisis facing this country at the moment. It is much more comforting to believe that countries like Ireland and Italy are banana republics than to consider that Her Majesty’s government might be getting things wrong.

Johnson’s plan rejected the received wisdom, and took a radically different approach to the rest of the world. Rather than encourage social-isolation, minimal disruption was made to the economy. Every day businesses stayed open was another day of spending, of VAT receipts, of GDP. If there was a marginal increase in deaths, then this was apparently a sacrifice Johnson and his government were willing to make. At best this decision may be remembered as a tragic miscalculation – at worst it may prove to have been grossly unethical.

Irish in Britain: Are you worried about the coronavirus outbreak?

It may of course turn out to be true that the measures taken by countries like Ireland result in no meaningful reduction in mortality. But their governments should be commended for making a meaningful effort to put public health first. It is far easier for a man like Johnson to be cavalier about the wellbeing of vulnerable citizens, when he knows his own multi-millionaire father can wait things out in a mansion in the countryside. For my neighbours in tower blocks in Hackney, how realistic are social-distancing for people living in such close proximity? We won't know for sure until we look back in retrospect, but it seems likely that it will be disproportionately the urban poor who will get sick and die

For immigrants in Britain, many of us are staring down financial and existential crises, stranded on an island with an administration we no longer have faith in to govern. Putting aside the pain of having life here being put on hold indefinitely, we must also consider the logistical and moral implications of returning home, especially if we have loved ones over 60. My Italian friends are no longer able to fly home even if they want to, and the Irish in Britain could be weeks or even days away from being in the same situation.

It’s incredible to think that even a fortnight ago I believed the biggest crisis of our time was Britain’s exit from the EU - I now look back on Brexit with a sense of nostalgia, like the negotiations were a warm blanket I yearn to slip back under. The stakes are now much higher, but the fundamental problem is the same - a Conservative government that thinks it knows better than experts, that believes Britain is fundamentally different (read: better) than the rest of Europe.

Whatever Britain’s opinion of its European neighbours, now is the time for the world to align and work together through this calamity, for the benefit of all. The world is about to change, and perhaps it will be for the better. Perhaps we will invest more in our health services. Perhaps the old will stop dismissing the young as snowflakes, and the young will care for the old at this critical moment. And perhaps the British public will wake up to the naked contempt the Tories have for the vulnerable. This is a government that closed more than 800 public libraries to help bail out banks, but wouldn’t cancel Cheltenham to help save human lives. The only thing that is exceptional about them is their hubris.