Get Brecht at the NCH: The week’s best rock and pop gigs 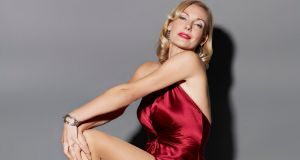 Ute Lemper joins a host of singers celebrating the songs of Bertolt Brecht at the NCH, Dublin on Saturday September 14th and Sunday September 15th

Out to Drexciya
Lucky’s, Dublin
Going from 1pm until midnight, music promoters Out to Lunch are doing more than just lunch, they’re giving you the full spread. With DJ sets from from Gash Colllective’s Eliza, Lunar Disko’s Barry Donovan, Acid Test’s Lerosa, Soundsweep’s Sharon Phelan, Lepton’s Ngoni Egan and many more, you can also get lost in the screenings of short films Hydra Decapita by the Otolith Group, Atlantean by Bob Quinn and Drexciya by Simon Rittmeier. Free in, this should have a bit more substance than your usual Sunday roast. LB

Kojaque & Luka Palm
Limelight, Belfast. Also Dolans Upstairs, Limerick, Thursday 12 ; Dali, Cork, Friday 13 ; Academy, Dublin, Sunday 15
The past 12 months have been great not just for Kojaque (aka Kevin Smith) but also for the nation’s hip-hop community. Smith’s work in the areas of music and visual art/film may hoist him a few inches above some others, but it is the former that the majority of people know him for. This mini-tour launches his and (fellow Soft Boy Records artist) Luka Palm’s collaborative mixtape, Green Diesel, which is now on release. TCL

JyellowL
Cyprus Avenue, Cork
Having performed at Forbidden Fruit, Body & Soul, Longitude, Knockanstockan and Electric Picnic  this summer, Dublin rapper JyellowL is gearing up for a string of headlining gigs. This Cork appearance is the beginning of that, with dates confirmed in Whelan’s on October 10 and in the Netherlands on October 11. Named as one of 2FM’s Rising acts for 2019,  the 20-year-old is also studying politics in UCD, so his social observations make their way into tunes like Tek Time and Medusa. So for considered verses and tight production, he’s yer man. LB

You Am I
The Grand Social, Dublin
Celebrating 30 years at anything is no mean achievement – it signifies persistence and determination, if nothing else. So happy anniversary to Australia’s You Am I, a rock band that have two of their albums (1995’s Hi Fi Way, 1996’s Hourly, Daily) in the Hottest 100 Australian Albums of All Time list. Having run a red pen through the rulebook over the years, the band members find themselves at a point where they can, pretty much, do whatever they want to. Live performances veer between ragged rock’n’roll glory and pristine power pop. Enjoy. TCL

Sounds From a Safe Harbour
Various venues, Cork. Runs until Sunday 15
Back for its third year as one of the most interesting and left-of-centre city-based festivals on the Irish event calendar, Sounds from a Safe Harbour has true pedigree (it is curated by musicians Bryce and Aaron Dessner, festival director Mary Hickson, playwright Enda Walsh and actor Cillian Murphy). It also has a really good rolodex of contacts. Over the next few days, the likes of Jon Hopkin (DJ set, tonight, Dali), Damien Rice (Friday 13, Opera House), Kojaque & Luka Palm (Friday 13, Dali), Feist (Saturday 14, Opera House), Caoimhí­n Ó Raghallaigh & Thomas Bartlett (Saturday 14, Live at St. Luke’s), Rosie Carney (Sunday 15, Coughlan’s) will form merely a part of the line-up. TCL

Julia Michaels
Olympia Theatre, Dublin
Julia Michaels has been writing since she was 14 – fast forward 11 years and she has successfully made the transition from songwriter to the stars (including Selena Gomez, Justin Bieber, Hailee Steinfeld, and Niall Horan) to hogging the spotlight. This year has seen her release two irresistible earworm EPs (Inner Monologue Parts 1 & 2) that constitute a full album’s worth of quality material; Inner Monologue Part 3 will be released within a month or two. In the meantime, join her on her debut headline Dublin show – you won’t be disappointed. Special guests are UK trio, New Rules (who return to Dublin on Friday September 27th. TCL

Homebeat presents: Grandbrothers
The Button Factory, Dublin
Now that the Homebeat team have wrapped up on festival season, with Another Love Story exceeding its magical reputation this year,  they can return to curating gigs with exceptional local and global talent. One of the first gigs on their autumn schedule is Grandbrothers, an experimental duo who blur the lines between classical and contemporary music. As German-Turkish jazz pianist Erol Sarp plays, Swiss engineer Lukas Vogel live-samples his musical partner’s notes, splicing and skewering them to make something really unique. LB

Peter Hook & the Light
Dolan’s, Limerick. Also Friday 13, The Academy, Dublin
The legacy of Joy Division is unassailable, while the back catalogue of New Order is littered with quality music. A connective nerve is Peter Hook, a bass player extraordinaire that is playing the music of his two former bands with The Light, a group formed in 2010. In essence, this is a masterclass in how to revisit the past without messing it up. No real surprises, of course, just lots of known pleasures, from Joy Division material to run-throughs of New Order albums Technique and Republic. TCL

Edwyn Collins
Liberty Hall Theatre, Dublin. Also Sunday 15, Empire Music Hall, Belfast
Some odds aren’t meant to be overcome, but Edinburgh’s Edwyn Collins has shown that where there’s a resilient way there’s a resistant will. Over 14 years ago, Collins was recovering from two instances of cerebral haemorrhage, and while he hasn’t fully recovered physically, his mind remains as sharp as a tack. This year’s album, Badbea – his fourth since 2005, and named after an abandoned village in the Scottish Highlands – was received with open arms by fans and critics alike, with The Observer newspaper describing it as “a spirited and triumphant addition” to the songwriter’s discography. TCL

Katie Kim
The Workman’s Club, Dublin In what is set to be a bittersweet affair, this event will be Katie Kim’s last Irish show before she ups and leaves to relocate to the States.  Skilled in sharpening dark moods with introspective lyrics, the Waterford singer-songwriter sets a cinematic scene with dramatic synth-fuelled melodies that hang in the air.  As a parting gift, she will preview tracks from her forthcoming fifth album as well as tipping into older material. Join her for one last whirl and give her the send off she deserves. LB

Stephen Malkmus
Whelan’s, Dublin
The man is best known for his work with the much-praised US indie band, Pavement, and his current group, The Jicks, as well as having served notably well as a member of Silver Jews. There will, no doubt, be several sincere words about his friend and Silver Jews bandmate, David Berman, who died four weeks ago, but overall this solo show will showcase just how good a songwriter and performer Malkmus is. Tracks from his latest solo album, Groove Denied, will be aired. TCL

Christian Wethered // Adam Fleming
Upstairs in Anseo, Dublin
This double headliner gig sees the Dublin-based English poet and songwriter Christian Wethered and Dublin guitarist and songwriter Adam Fleming preview new material from their respective debut EPs. Nicely juxtaposing each other, Wethered draws on influences from French performers like Serge Gainsbourg  and emotive indie acts The XX and James Blake while Fleming treads the lines between folk, 60 psychedelia and 90s alt-rock. Wethered’s Mon Petit Jardin and Fleming’s Calling the Ghost to Life are set to be released later this year. LB