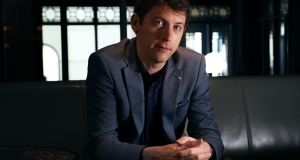 Finghin Collins: ‘It’s the first time in my life that I’ve actually had time to sit down and say what do I want to learn that I don’t necessarily need to learn for an actual engagement’

It’s almost an inevitable question now, when you catch up with someone you’ve not been in touch with during the Covid-19 pandemic – What have you been up to during the lockdown?

Pianist Finghin Collins, who is also artistic director of Music for Galway and the New Ross Piano Festival, has always presented himself as an easy-going, optimistic, forward-facing character, a former child prodigy who launched his international career by winning the Clara Haskil International Piano Competition at the age of 22 in 1999.

But, even for him, the first lockdown last March was “very difficult”.

“It came with such abruptness. There was nothing in place, no mental preparation, no physical infrastructures, online facilities. We weren’t set up for it. It was a great shock to the system. What I said to many people at the time was the hardest thing about it was the lack of a finite end. We didn’t know when or how it would end. We were getting bad news all the time.”

He was also presented with the emotional challenge of “all of a sudden having an empty diary for months. I had a lot of engagements lined up, some very exciting ones, including my debut in Moscow in the Great Hall of the Moscow Conservatory with the Russian National Orchestra in May, and back there again for a recital in June. I had concerts in Switzerland and the UK, in Denmark, Hungary, all around the place as well as in Ireland. It was really very, very difficult to have day after day empty and have to fill the time.”

And, wearing his Music for Galway hat, he had to face up to the disruption to the the cello festival, Cellissimo, that had been three years in the preparation and was due to take place at the end of April. “It had to be called off, postponed, re-imagined. That was a big shock.” The festival is currently scheduled to take place from Saturday, March 21st, to Saturday, March 28th.

Like many people who saw the bulk of their work evaporate, he found himself with a peculiar dilemma. “On the one hand your brain was saying, look, you’ve got all this time, why don’t you this, this, this, all the things you’ve never managed to do. And on the other hand it was very difficult to focus one’s mind, very hard to concentrate, particularly in the first two or three months.

“So I learnt repertoire. I did an awful lot of work in the garden. I took up jogging. Anything to distract myself from the awfulness. In a way it was running away from reality. It wasn’t really calm, focused work.”

The second lockdown was “totally different”.

“First of all I’d got used to the idea that this thing is here. Secondly we were set up in the online world. I think Ireland has done extremely well in the arts, in the sense that many, many classical music organisations, and others, have pivoted very quickly into the online space. If I speak to my colleagues in France, Germany, Switzerland, continental Europe, they haven’t. Either they have concerts with a live audience or they have nothing. Whereas here we really managed in August, September, October to get ourselves into this online space where we were able to do a lot of either livestreams or prerecorded concerts.”

There was even a short window in which live concerts were possible: “At the New Ross Piano Festival we were able to do that at the end of September; we had one concert with 50 distanced people. That was terrific, just to be able to do it. It was hugely satisfying for us, for the audience, just to have a good news story.

“Then throughout October, November I was really very, very busy with lots of different prerecorded or livestream concerts around Ireland. I even managed to get to Switzerland at the end of August for a festival that was postponed from July. The second part of the year was much better. I was distracted, I had goals, I had stuff to practise, I had concerts coming up. So I was in a better place.”

Though the disruption of his work and career is far from over – some rescheduled concerts are now getting postponed for a second time – “I’m optimistic that, once things do settle down with the vaccinations in the coming months, things will become busy again in this 2021-22 season.”

And he’s still working on repertoire. “It’s the first time in my life that I’ve actually had time to sit down and say, look, what do I want to learn that I don’t necessarily need to learn for an actual engagement.

“In the early lockdown I learnt Brahms Ballades and Schubert Impromptus and a Beethoven sonata. Now, in December and January I’ve been learning a Bach English Suite and Schubert’s Wanderer Fantasy and I’ve nearly finished learning Chopin’s Second Scherzo. That’s been good.”

This year’s Music for Galway January Midwinter Festival was originally conceived as a kind of “aural palette cleanser” after the wealth of activity that should have been delivered in Galway’s year as European Capital of Culture.

“I decided to focus on something very intimate, and thought, what if we took a piece and heard it in many different forms, and allow people to compare the different ways in which they could hear this music. One of the very few pieces in the repertoire, I think, that could sustain that sort of attention is the Bach Goldberg Variations.”

He’s certainly not wrong there. The work has been arranged, orchestrated, reworked and re-contextualised in any number of sometimes unlikely-seeming ways. Try Ágnes Szakály and Rózsa Farkas on two cimbaloms, Gustavo Trujillo’s version for 16 voices and baroque ensemble, or Robin Holloway’s 100-minute Gilded Goldbergs for two pianos. And he’s following in the footsteps of Eugene Downes, who presented multiple versions of the work at Kilkenny Arts Festival in 2015.

I’m not somebody who finds it easy to play solo piano music with score, so I think I would rather memorise it

Collins’s Galway offering opens with the harpsichord original played by Malcolm Proud. He follows that with Austrian composer Karheinz Essl’s Gold.Berg.Werk, a version for piano and electronics performed by Xenia Pestova Bennett (piano) and Ed Bennett (electronics) – the duo’s Music Network tour of this version, planned for October, has had to be rescheduled.

The 1980s string trio version by violinist and conductor Dmitry Sitkovetsky, a former principal conductor of the Ulster Orchestra, will be performed by violinist Alexander Sitkovetsky (nephew of the arranger), viola-player Sergey Malov and cellist Natalie Clein. Each performance will be introduced by the performers. Collins wraps the weekend up with Bruno Monsaingeon’s film of Glenn Gould’s 1981 recording of the work.

Of Gould’s playing Collins says, “It’s obviously eccentric music-making. He takes the fast movements very fast and in fact watching him can be one sense exhilarating and in another sense very distracting. And then there are the noises that he make as he plays. But it is exhilarating. He just feels every single note. There’s amazing energy. It’s like he’s managed to focus on this piece for this number of minutes.

“If a nuclear bomb went off outside, you feel that he wouldn’t stop. He was just so in the world of the music. I really admire that focus. You do feel in his case that he lived with this music for so long that it’s almost become part of his body. It just is him. Maybe we superimpose these things because we know it. There’s an incredible conviction in his performance.”

What does he think of Gould’s still much-discussed decision to give up concert-giving in favour of the recording studio? “I can absolutely relate to it, yeah. It’s not that I would do that.”

He can see how musicians might get tired of the world of performance, of “having to play for people at the drop of a hat, having to be a so-called entertainer, having to travel, having to compromise. Gould took it to an extreme and didn’t perform for decades. But other people scale back, do more teaching. And some become addicted to the whole relationship between the public and the performer.

“I can see how for some people public performance becomes . . . you know, Rachmaninov 2 here this week, and Beethoven 3 the next week . . . it can become routine, you can ask yourself what am I doing here? Am I serving myself? Am I serving other people? Am I getting as much out of this as I would like to? I can see how that could happen.”

And has he ever thought of tackling the Goldbergs himself? “I thought about it many times. It came back to me during lockdown. It is tempting. But it’s such a huge undertaking. The memorisation would be absolutely massive.

“I’m not somebody who finds it easy to play solo piano music with score, so I think I would rather memorise it. It’s something I would theoretically like to do. But I’m not absolutely gagging to do it. In one sense it’s lovely to be able to sit and enjoy other people playing it. It’s such fabulous music.”

Music for Galway’s Midwinter Festival will be streamed between Friday, January 22nd, and Sunday, January 24th. Tickets from www.musicforgalway.ie