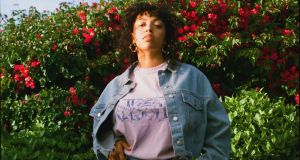 You might have thought that waiting for the best part of ten years to release a debut album is the preserve of either the patient, lazy, fixated, or one of the longest development deals in record company history. For 21-year-old Mahalia Burkmar it wasn’t any of the above, but simply time spent carefully making sure that what she wanted people to hear was representative of her as an artist, songwriter and woman. There was attention to detail, of course, but not obsessive enough to drive anyone to distraction.

The perception, however, of a 13-year-old girl from a provincial UK city (Leicester) signing to a major record label (Atlantic, part of parent organisation Warner Music Group) is that of a lamb to the slaughter. For some labels, hands would be gleefully rubbed, boxes marked “impressionable”, “star-struck”, and “easily shaped” would be instantly ticked. Speaking from London the day after our meeting in Dublin was postponed, Mahalia is quick to point out the reality of her experiences.

“That wasn’t the case with me,” she admits, allowing that at the very early stages of her being signed, “they thought they could”. As any young teenager more than likely would be, Mahalia admits to being somewhat naive, “but I was stubbornly uncompromising, and found it hard to let anyone tell me what to do. The record company knew quite early on that I wasn’t going to listen to them on certain matters, and that I wasn’t going to follow their directions on absolutely everything.”

Her musically minded parents, she adds, assisted greatly, “making sure that certain things were never going to happen. They played a huge part in keeping me on the right path, ensuring that I was always listening to myself rather than anyone else. In fact, it was only some years later I realised how hard my parents were working during that time to ensure I was a stable young woman.”

There followed about five years of, well, what exactly was it? Development hell? Not necessarily. Creative indecision? Some of that. Still attending school while being introduced to a world of backroom songwriters and front-of-stage performers? A lot of that. There was also, of course, Mahalia’s natural development as a teenager: maturing, making mistakes, learning from them, scrabbling for ideas about identity and relationships. Perhaps most important of all was realising not everyone would admire her songwriting and that people would, all too inevitably, compare her to other singers and songwriters. Key to her satisfaction as an artist, implies Mahalia, was grasping this fact and never letting it go.

Following her signing to Atlantic, when did she start to feel that she was settling into her music, being an independent person, not having to depend on decisions made by her parents?

“Well, I’d like to think it was when I turned 18, but actually that age was just when I started to really rely on people, so I would say it was when I was about 19, and moved home. That was when I genuinely realised I was winning, directing my own career. It was a revelation to me, because, while it was challenging I also learned that in this industry, in particular, it’s much better to stumble along than not do it at all.”

'I was so used to listening to female voices that I didn’t listen to the guys, but in doing so it gave me some understanding of the male psyche'

Gradually, her music found its feet during what she recalls as having almost two full-time occupations. Mahalia finished her GCSEs, studied acting and dance, made great friends, and began to improve even more her observational skills as a lyricist. It is in this area, as much as with her silky-smooth soul/R&B music, that Mahalia is causing a stir.

Fundamental to her music – featured to agile effect throughout her much delayed but recently released debut album, Love & Compromise – are self-confessed influences such as Lauryn Hill, Erykah Badu, India Arie, Jill Scott, Adele, Angie Stone, Amy Winehouse. “Throughout my childhood and through my teens, my parents played their records in the house pretty much all of the time,” she says. “And as I got older I just carried them along with me. Amy Winehouse, in particular, struck a chord with me.”

’Both sides of the same story’

Because of such inspirational women, outlines Mahalia, it was much easier for her as a teenager to align herself with other female songwriters. Yet something was missing, she adds – she only had one side of the story. As she matured, she began to listen to the men.

“I was so used to listening to female voices that I didn’t listen to the guys, but in doing so it gave me some understanding of the male psyche and I’m happy to say that I got a totally different perspective on gender. When I was 13, I heard Ed Sheeran singing about male-female relationships, and I remember thinking it was so lovely. And then I heard For Emma, Forever Ago, by Bon Iver, and, oh my God, I still recall feeling so strongly that as he wrote the album his heart was breaking into pieces.

“Because I didn’t know what it was like to be a guy, I didn’t really think that men could also be heartbroken – I only knew what it was like being a female experiencing that. It was getting a different perspective but also hearing what men thought about love, and that was when I really started writing songs. I was intrigued by both sides of the same story.”

Too often, says Mahalia, you hear about men not expressing their emotions, “but when I discovered that blokes could do just that through songwriting, it changed me. When I was at school, like all girls of around that age, I was just trying to work out what guys were thinking, so listening to male songwriters helped me understand something I had never considered up to that point.”

Having an all-round perspective on relationship matters is, she agrees, crucial to her success as a songwriter. Writing about emotional ebbing and flowing amidst endless individual experiences, I suggest, also means that she will never run out of song material.

“No, I won’t! As you get older, you fall in and out of love with different people, and so something you didn’t realise when you were much younger is bound to come through. You actually get to understand how different people are, and you change, people always change.”

And yet underlying the emotional responses and reasons that run from one end of Love & Compromise to the other is a firm notion of self-respect. Not for nothing does the album open with a quote from Eartha Kitt; her opening statement is one of self-confidence and little or no compromise. Kitt’s words form, verifies Mahalia, the core concept of the album.

What did she experience this time, I ask. “I realised the bottom line is not only self-respect but also respect from the other person.”

Love & Compromise is on release through Atlantic/Warners.