Electric Picnic covers all the bases

Festival draws to a close with indie blast from Arctic Monkeys 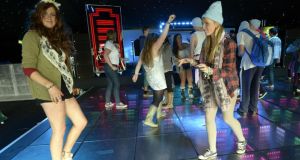 The last hurrah of the summer, a 10th birthday party, an established hooley, a sold-out crowd, a cerebral weekend, a chance to go wild. Electric Picnic 2013 covered all bases, and drew to a close last night with an indie blast from Arctic Monkeys.

The crowd has morphed from the festival’s origins. Picnic veterans taking advantage of the offers of cheaper tickets depending on how many years you had attended the festival, joined a fresh young crowd.

Sadly, a 20-year-old man died in the early hours of Saturday morning, after being found unconscious in a campsite by security. He was later named as Phil McConnell, from Malahide, Dublin, and had a previous cardiac history.

Friday night was scaled down, with just the main stage and Body & Soul open. As the tents unlocked on Saturday thousands of people flooded the main arena. Crowd-pleasers Fatboy Slim and Ocean Colour Scene might not be the coolest acts around, but they pulled in enthusiastic audiences. Late at night, the Red Bull Music Academy Stage and the Salty Dog stage in the woods provided tunes for those who didn’t want to crawl back to their tents too early.

There were some challenging sets at the festival too. Bjork delivered an astounding and uncompromising interpretation of her Biophilia album. Robert Plant noodled around a good bit. Disclosure’s perfect dance pop wasn’t to everyone’s taste as a late-night main stage Saturday night act, but those who were there had a blast.

And on Sunday night, Swedish left-fielders The Knife delivered their unusual live performance that has been touring this summer. Body & Soul was full of intriguing discoveries, many of them home grown; Daithi, Lisa O’Neill, Tieranniesaur, Le Galaxie, Jennifer Evans and Maud In Cahoots among them.

The usual groans about queues for toilets and the bar were faint, and in a nod to the sedate segment of the crowd, the main stage arena had added seating this year.

The trimmings attendees are used to – hot tubs, comedy tent, inflatable chapel – are all very charming, but there is also a sense that the festival must evolve lest it become too familiar. There will always be new festival lovers graduating to the field in Stradbally, but seasoned customers might ask for a little more next year.

Build it and they will come: the story of the Irish language in a disused airport
5

‘There’s an Irish client none of us wants to handle ... from the North.’ Enter Gerry Adams
10