Review: Dublin-Tullamore crew Scary Éire played the Salty Dog stage in the woods at 1am 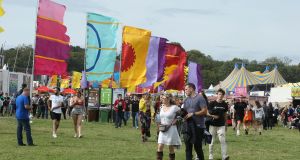 Every generation likes to believe that it got there first. That’s certainly true of Ireland and hip hop. The country is surfing a swell of exciting new rhymers and producers (and some controversial ones too: search Twitter for Versatile and then take cover).

But there was life in Irish rap before Gen Z dropped its first mixtape. Here to remind us with an Electric Picnic reunion are Dublin-Tullamore crew Scary Éire. Years – decades actually – before it was fashionable to rhyme in a semi-Irish accent, the group put the genre here on the map as the first Irish hip hop outfit to sign to a major label (and to play arenas, which they did supporting U2).

They were ferocious value as they stormed the Salty Dog at 1am. It turns out that a pirate-themed stage deep in the County Laois woods is the perfect backdrop for their witty and fist-clenched take on gangsta rap. The boyos were in the ‘hood.

“You want to see a real DJ? Try this on your laptop,” declares frontman Rí-Rá introducing an onslaught of scratching.

Because they came of age in a more closed off and misanthropic time, Scary Éire have a complicated relationship with Irishness. The bell-chimes of the Angelus usher on Rí-Rá “hypeman” Mr Browne and DJs Mek and Dada Sloosh; later a bodhrán makes an appearance.

There are also chants of Up the Dubs – the punters on balance would prefer the Dubs stayed where they were – and, during a technical glitch, a chorus of that old school classic Come Out Ye Back and Tans.

There are some irrepressible raps too. “Howld Yer Whisht” they chant during the song of the same name. The (rather careworn) audience parties like it’s 1991.

The New Mutants: ‘I kept reading all these articles and none of it was true’
9