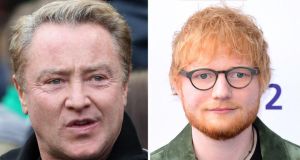 Ed Sheeran has reportedly increased his wealth by £40 million (€45 million), staking a place in the top 10 of the UK’s annual music rich list.

The 29-year-old is the richest musician in the UK aged 30 or under, with a wealth of more than £200 million, according to the list.

In December 2019, the singer-songwriter, whose grandparents are Irish, announced he was taking a break from music, after a busy two years in which he married his long-term partner, Cherry Seaborn, and completed his record-breaking Divide Tour.

He had played more than 250 shows to more than seven million fans since March 2017, with Divide becoming the most attended and highest grossing tour of all time, breaking U2’s record.

Elsewhere the Sunday Times music rich list estimates Michael Flatley’s wealth at £206m, placing him one place higher than Sheeran, Sting and Rod Stewart, who are all ranked in 10th place with £200 million.

The Irish-American former dancer amassed a huge fortune with the help of his shows: Riverdance, Lord of the Dance and Fleet of Flames.

Rihanna has also neared the top of the UK’s music rich list after moving to Britain last year, beating the likes of Mick Jagger and Elton John.

The 32-year-old singer, originally from Barbados, qualifies for the list for the first time after her surprise move to London and has an estimated fortune of £468 million.

Her wealth has been boosted by the success of her Fenty cosmetics brand and other partnerships such as her lingerie line, as well as record sales from her eight albums.

Paul McCartney and Andrew Lloyd Webber remain the two richest British or British-based musicians – both are valued at £800 million.

But Rihanna is a new entry at number three on the list, which is a precursor to the annual rich list that comes out on Sunday.

Much of her wealth comes from a partnership with the French luxury goods brand, LVMH. Their cosmetics brand is valued at $3 billion (£2.45 billion), with Rihanna having a reported 15 per cent stake worth £351 million.

Robert Watts, the compiler of the Sunday Times rich list, said Rihanna’s inclusion typifies the “seismic change” that has taken place at the top of the list in recent years as those with inherited wealth are usurped by younger self-made stars.

“If you look through the yellowing pages of the first list in 1989, it looks like a rogues’ gallery of middle-aged and elderly white men. It was earls, dukes and figures from manufacturing and finance,” he said. “Now money is being made in different ways, and by all sorts of different people – like Rihanna.”

Lloyd-Webber retains the top spot despite the closure of the West End and Broadway having an estimated £20 million impact on the composer’s wealth. He shares the top spot with McCartney, who bolstered his wealth by approximately £50 million after a sellout 29-date tour and a bestselling children’s book.

Watts expects a difficult 2020 for artists who, he says, are going to be hit hard by the impact of Covid-19, with live touring – which is the big earner for acts as physical album sales dry up and streaming payments bring in paltry sums – coming to a halt.

“The cancellations of tours and the pulling of albums mean it will be a thin year,” he said. “We expect most artists’ earnings to flatline but not for them to necessarily lose money, because the bulk of their wealth is already earned and safely in their bank accounts.” – PA/Guardian