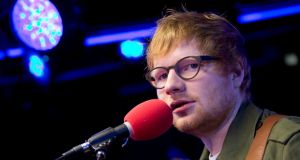 Ed Sheeran’s Divide: ‘imagine a Tesco music version of When We Were Young, created to skip paying royalties and to soundtrack your bulk Andrex shop’. PhotographL Isabel Infantes/PA Wire

Ed Sheeran is, in PR terms, an influencer. While he’s not selling you detox tea on Instagram just yet, through his own music and the songs he writes for Justin Bieber, Taylor Swift, The Weeknd and One Direction, everything he does has an impact on music. Hold onto your loved ones. This is the horror that we live in.

÷ (Divide) is the Yorkshire man’s third album, after + and ×, so pretty much all that’s left is minus and that is exactly where we are. Opening track Eraser is about the pitfalls of fame and it’s a nod to his love of hip-hop – he’s friends with Stormzy, you know. He raps a little and imagine, if you will, a Tesco music version of Whipping Boy’s When We Were Young, created to skip paying royalties and to soundtrack your bulk Andrex shop.

Between slow sets for the nursing home (Dive, Perfect) and throwbacks to package holidays in Spain (Barcelona, Bibia Be Ye Ye), the biggest offender on ÷ is Galway Girl, not a cover but an original. In an interview with the Guardian, Sheeran says that his label weren’t keen on this ‘folk’ song and his response was: “Well, the Corrs sold 20m records”. This is the power that leading music influencer and, evidently, master debater Ed Sheeran is wielding. He wants Avicii fiddles, Grafton Street glory and Andrea Corr. He’s doing to folk music what Steps’ 5, 6, 7, 8 did for cowboys. He’s doing to Ireland what Steve Bannon is doing to Irish ancestry.

For a man who claims to have grown up on Planxty, Nancy Mulligan, a ballad about his grandparents from Wexford, has all the authenticity of an Irish bar in Malaga that serves buttery chicken wings. Along with LADSLADSLADS, Malaga is also targeted in New Man: “Every year he goes to Malaga, with all the fellas, drinks beer but has a six pack, I’m kind of jealous.” Shape of You was initially intended for and then rejected by Rihanna and it’s the album’s only saving grace. Rihanna’s leftover pizza crusts are what we are feasting on.

In a post-Brexit world, Sheeran is conveniently playing up his Irishness but we see through you, pal. And while you’ll probably get a number one album here, sell Croke Park out 10 times over and graze your sheep in Stephen’s Green (inspiration for your next album? Urban farming?) once you get Freedom of the City, we see through you.