Aiken Promotions confirms no extra concerts will be added 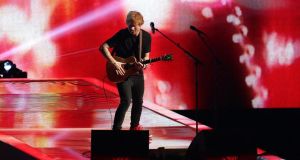 Ed Sheeran performs on stage during the 2015 Brit Awards at the O2 Arena in London. Photograph: Yui Mok/PA

Tickets to see Ed Sheeran play in Croke Park this summer sold out in less than one hour on Thursday.

Fans had lined the streets waiting in the bitter cold and rain through the night to get their hands on a ticket to see singer-songwriter on July 24th and July 25th.

Sheeran said he never considered playing Croke Park before because of the size of the stadium but he was now in the “peak of my career. I hope it keeps peaking as long as possible.”

The 24-year-old said he would take a break for a year after the concerts.

A spokeswoman for Aiken Promotions said no extra concerts would be added.