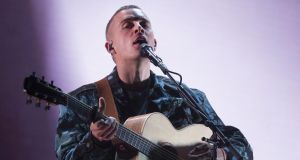 This Dublin-based audio-visual duo know how to get the party started and then keep it on its collective feet – blame, if you will, producer Daz’s smart use of electronic beats and vocalist Cayisha’s soulful tones. From being a support act to the likes of Kelis and Daithí to performing at festivals such as Body & Soul and Electric Picnic, Prymary Colours bring their Silver Ball show to the public. Those expecting a glitzy, glammy evening of old and new music and associated dance moves will not be disappointed. TCL

After the thudding success of his headline set at Electric Picnic, Cuban-American house and techno DJ Maceo Plex is making his District 8 debut. With a residency in Ibiza and a summer filled with festival appearances, he knows how to put on a showstopper. He will be joined by Berliner  Ellen Allien, who will whip out a set loaded with acid, hypnotic house and techno classics. Support on the night comes from Deciduous and tickets are priced at €20-€25. LB

Written and recorded between New York, Los Angeles, London, Dublin, Cork and Reykjavik, Talos’s second album Far Out Dust takes on a more expansive tone than his debut Wild Alee, but home will always be at the heart of what he does. With a headlining show in the Olympia freshly wrapped up, he’s returning to the sod of Cork for the final run of his 2019 tour. LB

About 10 years ago, North Shields singer Sam Fender was working part-time in a local bar, the owner of which encouraged his staff to participate in open mic sessions. By 2011, Fender had signed a management contract, and soon after a development record deal with a major label. It is only in the past two years, however, that he has achieved mainstream recognition, having honed his live show skills in small music venues within the UK and beyond. Fender’s rise over the past year in particular has been swift, assisted in no small way by a batch of songs (mostly from his debut album, Hypersonic Missiles) that match social issues with a keen awareness of rock’n’roll dynamics. Both shows are sold out. TCL

Irish brothers Harry and Alfie Hudson-Taylor are gearing up for the release of their second album early next year. As part of the preparatory work, someone came up with a decent marketing strategy: why not throw a pre-Christmas party for their fans in the shape of a six-night residency in one of Dublin’s best music venues? Fans will, no doubt, hear a decent-sized road-testing preview of the forthcoming album (on which they worked with Birdy and Taylor Swift producer John Rausch) as well as familiar favourites from their 2015 album, Singing for Strangers. TCL

It was never going to be an easy sell: a new Irish group fronted by the son of one of the most famous rock stars ever to walk onto a stage. How on earth can anyone compete with that? The answer is you can’t – you just apply your own identity to the job at hand, write a bunch of catchy contemporary pop/rock songs, look good on stage, depend on your bandmates to carry you through the interminable media questions about living with a dad called Bono, and hope for the best. A good band slowly, surely, getting through. Both gigs are sold out. TCL

Belgian techno DJ and producer Charlotte De Witte seems to be a creature of habit. This time last year, she graced District 8 (when it was based in the Tivoli Theatre) with her presence for a sold-out show, and now she’s back for another go. In a double headlining gig, Dublin techno wizard Sunil Sharpe will be joining her on the bill, and support comes in the shape of Shampain, one of Ireland’s rising stars in dance music. LB

It’s the same old and too-often-retold story: the band is good, the songs are good, the live performances are sparky, and the fans at the gigs are not only appreciative but fanatical. And then? The band break up for various reasons. Otherkin announced their split some months ago (due, they outlined in a press release, to some bands having “more fuel than others, and unfortunately the day arrived where our fuel ran out”), but have been gracious enough to bow out on a fan-pleasing high with some farewell shows, of which these two are the final ones. The Dublin show is sold out, some tickets left for Galway. TCL

There’s a lot to be said for the steadiness of the popularity of some performers. The danger of a sharp and swift increase in popularity is that there is a distinct possibility of the opposite happening. Not so to Damien Dempsey, the Dublin singer and songwriter who seems to have managed expectations as well as output over the past five years, in particular. Dempsey has something else, however: his fans know that he puts on a down-to-earth live show. No bells, no whistles, no gadgets, and no novelties, just sturdy songs and an equally firm stage presence. All three shows are sold out – no surprises there, either. TCL

For many people, the annual Attention Bébé Christmas Party is a highlight of the season. Taking over Sugar Club for the night, the 90s party band commit to the theme of Christmas by indulging in games of Pass the Parcel while covering of Alice Deejay’s Better Off Alone and Crystal Waters’s Gypsy Woman. Keep an eye out for the Shiftmas Stick (that’s some mistletoe stuck to the end of a stick, in case you didn’t know) as it works its way through the crowd. LB

You remember some bands because, for however long they were around, they struck more than just a pose – they hit a nerve, a chord, an emotion. Dublin band The Brothers Movement (so named because of three siblings in the ranks, Daniel, Neil and Conor Paxton) were one such, a sextet that had many of the right things going for them: songs drenched in riffs and rhythms that Black Rebel Motorcycle Club, MC5, and Beatles fans could easily approve of. The band are back for one night only in order to celebrate the 10th anniversary of their self-titled debut album, which they will play in its entirety. Special guests include Irish indie-rock acts Birds of Olympia and Galants. TCL

When it comes to booking women for festivals, the line “there just isn’t as many women DJing as men” just doesn’t cut it anymore. Gash Collective have done incredible work in terms of promoting and uniting women working as producers and DJs in Ireland. For a tremendous year of visibility for female artists and an even more impressive list of deadly sets at almost every festival this summer, give Gash your love at their Christmas party. Lolz will be joined by London DJ Debonair. LB

Last year’s gig raised almost €500,000 for the ISPCC, so there’s no pressure for this one. Alongside the RTÉ Concert Orchestra, which will be adding strings and things to the proceedings, there will be performances from the likes of headline act Picture This, and Lyra, and it is hosted by various 2FM presenters. May we advise concertgoers of a sensitive aural disposition to wear earplugs – we have been to a few of these before, and the scream-decibel level is in line with the talent on the stage: through the roof. TCL

When you get to a certain age, you stop telling people how old you are; but if you’re running a club night, every birthday counts. Going strong for 5½ years (May 2014 to December 2019), Sim Simma know that 5½ is an age worth celebrating. Taking over the entirety of Wigwam, including the smoking area where it all started, the Dublin-based dancehall collective has Toby Kaar, Born Cheating, Pablo Santos, Denise Chaila, Breezy iDeyGoké, God Knows and the Sim Simma DJs on hand to entertain you all night. LB

You don’t have a ticket for these 3Arena shows? You can say goodbye to getting a seat, then. You don’t have a ticket for next year’s open-air shows at Malahide Castle, Co Dublin (June 26th) and Irish Independent Park, Cork (June 27th)? You can say adieu to securing standing room only, then. There is no doubt whatsoever that Dermot Kennedy is well on his way to becoming a major international pop star, so you might as well sit back and watch him as he rises ever skywards. If you’re not a fan of emotive power ballads then you’ll be happy at home washing your hair, but tonight and tomorrow, at least, you’ll be in the minority. The special guest for the two nights is Northern Irish singer Lilla Vargen, who you are advised not to miss. TCL