Joy Crookes: ‘I love a challenge – that keeps the fire in me’

Singer talks family, Bangladeshi and Irish heritage, and finding freedom in her flaws 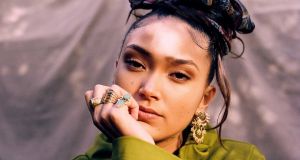 There is a gig to attend to in a church across the street from Benner’s Hotel, Dingle, and she really needs to be in the make-up room to get camera-ready for her debut appearance at Other Voices (“and I really need to shave my legs!”), but right now Joy Crookes is covering her glass of hot port with her hands, and sipping from it slowly. Baby, it’s cold outside.

Crookes has been to Ireland before, but not as a performer and singer. London-born, her mother is Bangladeshi, her father is Irish – “from the Navan Road”. As she lifts her hand to sip from her glass of port, I notice she has the name “Frankie” tattooed on her arm. I raise a thawing eyebrow. There is a real-life story behind it, she tells me.

Although I lived in London, my upbringing wasn’t at all traditionally British


“My grandfather passed away last year, he was like my big baby Irishman. Frankie Crookes worked as a cooper and then as an electrician for 50 years at St James’s Gate, and because we were so close I tattooed his name onto my arm before he died. He had the real mentality of the family – they don’t beat around the bush, they say it as it is. Bangladeshi families are the same – very straight-talking people.”

Crookes’s parents separated when she was a young girl, but it seems that ground rules had been laid when it came to the division of time for their children. Whenever she stayed with her father it was Ireland through and through.

“When I say it was Irish, I really mean that,” Crookes says. “Although I lived in London, my upbringing wasn’t at all traditionally British. Before I was born, I know my dad had a strong belief about wanting his children to grow up in the same culture that he had. That was a bit more difficult in London because there aren’t too many identifiable parishes near where we lived, but he wanted to send us to Irish dancing lessons, he wanted his culture to be inherent in his children, and for us to go to a Catholic school, whether or not we believed in what they were saying – his words, not mine.

“I remember, at the youngest age, he took me aside and said: ‘I don’t care if you’re brown or if you have an English accent, I don’t care – you’re Irish.’ That meant a lot to me because being a child of mixed-race heritage it’s very hard to find your feet, who you are, your identity. Some people aren’t bothered, they grow up where they grow up and they accept that. But the Irish side I took very seriously – we both have St Bridget’s crosses hanging around our necks. It’s hard to sit back and intellectualise it, and to be honest, it’s probably best not to. My background is my background, and that’s it.”

You might not have heard of Joy Crookes, but that will soon change. A few weeks ago, she was one of three emerging music acts nominated for the Brits Rising Star award, a prestigious recognition of her potential. Joy’s music style, as evidenced on recently released EPs and her urbane, natural performance at Dingle’s St James Church two weeks ago, sits somewhere between Billie Holiday and Amy Winehouse, albeit with judicious hints of her multiracialism.

The Irish sensibility in her music can be found in the transparency of her lyrics, which in turn are shaped, she admits, by “the poets I was told about, and whose poems I read”.

“Dad would sit me down on the staircase before I’d go to sleep and recite poems to me by the likes of WB Yeats and Paddy Kavanagh. The use of words from the likes of Raglan Road – ‘let grief be a fallen leaf’ – and the constant imagery from poets’ works is something I definitely inherited, consciously or not. Even now I read old Irish stories, poems, Oscar Wilde’s The Happy Prince, which must have had an influence on me. Detailing pieces of clothing, certain smells, street names – some people might think they’re mundane or basic reference points, but they all became very important to me in the telling of my own stories, whether large or small.”

And what of her mother’s influence, I ask. Irish melancholy turns into Bangladeshi exuberance. Joy’s face, now fused with the blush of warmth, reacts accordingly. “Oh, that’s colour, the use of voices! Along with the Dubliners and The Pogues, I grew up also listening to Quali, which is Sufi music, sacred music. Similar to many Irish singers, they use their voices to express pain and bury their souls in the songs, and whether or not I understood the lyrics, the voices would have the strongest impact on me. The Bangladeshi side also influenced my visual aesthetic. And definitely, hugely, from my mother’s side, I owe my frankness. She is a very headstrong woman, and walks into every room like she is meant to be there. She doesn’t need anyone’s permission – she owns it. Both of my parents are very good at living by example, but while my dad was more words, my mum was more action.”

One tends to think of separated parents and, nominally, a “broken” family as being the spur to certain layers of personal discomfort and dysfunction. No one is saying Crookes hasn’t experienced these, but she does seem to have processed elements of these events, to have evolved somewhat from the management of them, and to have fused a formidable identity. We have touched a nerve.“I’m currently writing songs for my debut album, and I’m understanding how they are stories of healing, torment, suffering, and finding that identity. I’m 20 now, but when I was 16 I wanted to know: ‘Who the f**k is Joy Crookes, and why is she like this?’ That’s all I want to explore in my music, and whether I explore that through looking outwards or inwards, then I’m for it.

One thing I realise is that I had rage – a bit as a kid, a lot as a teenager


“We are all works in progress – we’re all still learning. What I have discovered about myself is that I’m a lot stronger than I think I am. I’m speaking rationally here – I have dealt with things that I thought I’d never overcome, such as mental health issues and situations in childhood, all sorts of things. Another thing I’ve also realised is that I’m more like my parents than I would have liked to admit.”

Crookes’s work thus far has a two-fold purpose: to get limbs to swing and brains to think. She really wants her music to question various socio-political, race and gender stances and ideologies, doesn’t she?

“I do, and that’s because of the way my mum walks into a room and owns, challenges it . . . One thing I realise is that I had rage – a bit as a kid, a lot as a teenager. When the lyrical flow is good, I challenge these kinds of stereotypes: a woman’s role in society, being an ethnic minority, why the UK government feels immigrants are a bad thing. So, yes, I love a challenge, and that keeps me inspired, keeps the fire in me.”

There is yet another, more focused glance in our direction. An imaginary watch on a wrist is tapped several times. We have to finish. Joy drains her glass and sets it down on the table. She looks thoughtful. It seems she has one more thing to say.

“Remember, I was running around in a predominantly rough area of London as a Bangladeshi-Irish girl wearing a Led Zeppelin T-shirt. Kids would be laughing at me, calling me a punk and saying how they thought I was better than them because I played a guitar – someone once said to me: ‘Do you think you’re white now?’ God knows what they meant by that! We find freedom in our flaws, and I admit that I was once ashamed to be that girl in that T-shirt, but I just wanted to step outside the box. I soon found there was nothing wrong in doing that. As an adult, I’ve accepted those characteristics, but it took time.”

Joy Crookes’s latest EP, Perception, is on release. Her performance in Other Voices will be broadcast early next year.

Antonio Banderas: ‘The heart attack was the best thing to happen to me’
4

The Goop Lab: One episode is about the vulva. I’ll probably watch that with my parents
7

Frongoch: university of revolution and hive of creativity
9