Continuity is important in orchestras, and RTÉ’s plans will have a dire effect 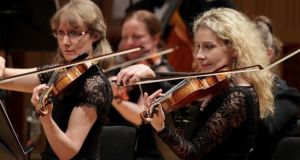 Do not think you are alone if you had a sense of deja vu when digesting the details of RTÉ’s latest survival plan, which was formally announced on Wednesday.

You will have encountered orchestral job losses in what director-general Dee Forbes euphemistically calls the reduction of “staff headcount” by the end of next year.

Wasn’t RTÉ’s orchestral adjustment all done and dusted last year? The Boaden Review, published in April 2018, recommended the transfer of the RTÉ National Symphony Orchestra from RTÉ to the National Concert Hall.

The Cabinet agreed in principle to the proposal in July. Various working groups and committees then established have not made much progress since, but €1 million was put aside in the budget last month to help pay for the changes.

RTÉ may not like the way politicians slip and slide about long overdue reforms of the licence fee, but Forbes seems happy to take a leaf out of the book of ministers who count houses built or jobs created more than once.

The transfer of the NSO was one of last year’s achievements. It’s being counted again this year. And it will probably be counted again whenever it’s actually completed.

So, how much money is involved? How many jobs are affected?

The RTÉ NSO’s 2016 expenditure is given as €7.17 million, although that amount does not include “central costs”, which fall outside the orchestra’s budget but which RTÉ also covers.

However, RTÉ is not actually in line to save over €7 million when the transfer is completed. RTÉ will continue to broadcast the work of the NSO and will have to pay it for broadcasting rights.

Currently, these broadcasting rights – and a rake of other rights – are owned by RTÉ by virtue of the employment contracts they have with the NSO’s musicians.

Boaden mentions direct government funding for the reassigned NSO of around €4 million a year, and ongoing RTÉ funding of €3.5 million. The transfer would save RTÉ around €2.5 million.

RTÉ has allowed the NSO’s permanent playing strength to drop from 89 to under 60, though it still hires in deputies as required on a concert-by-concert basis. Obviously, it has to, since it is not in a position to rewrite the music of the great masters by leaving out parts of scores that require musicians it no longer has since its permanent numbers may have dropped by over a third.

Pressed by RTÉ Morning Ireland’s Brian Dobson, who speculated that 50 or 60 jobs would be saved on RTE’s books by the NSO transfer, Dee Forbes replied: “A little bit higher than that, yeah”.

Well, is it 50? Is it 60? Is it 70? It would be amazing if RTÉ’s director general did not know the precise number of orchestral posts RTÉ expects to shed.

The disappointment for music lovers, who actually care about the make-up and wellbeing of the orchestra, will be even greater. Continuity is important in orchestras. RTÉ seems oblivious to the fact.