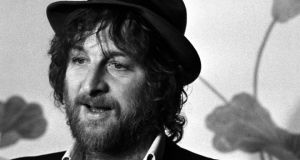 Chas Hodges and Dave Peacock rose to fame in the English pop-rock duo, known for their rock and cockney style, in the 1970s. Photograph: PA Wire

Chas & Dave singer Chas Hodges has died at the age of 74.

The singer died in his sleep in the early hours of Saturday morning from organ failure, a tweet from the musical duo’s official Twitter account said.

The statement read: “It is with tremendous sadness that we announce the passing of our very own Chas Hodges.

“Despite receiving successful treatment for oesophageal cancer recently, Chas suffered organ failure and passed away peacefully in his sleep in the early hours of this morning.”

A message on the group’s website added: “We would like to thank our fans for their fantastic support and goodwill at this difficult time.”

Hodges and Dave Peacock rose to fame in the English pop-rock duo, known for their rock and cockney style, in the 1970s.

They had a string of hits, including Rabbit, Snooker Loopy and Ain’t No Pleasing You.– PA