Bono’s brush with death: ‘I was clinging to my own life’

On the liner notes of U2’s new album ‘Songs of Experience’, the singer references 'a shock to the system' 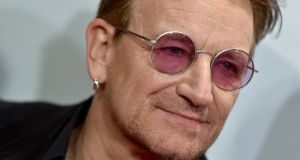 U2 singer Bono had a “brush with mortality” last year that has shaped the band’s new album. Photograph: Axelle/Bauer-Griffin/FilmMagic

Bono has written about a “brush with mortality” last Christmas that inspired at least three songs on the new U2 album Songs of Experience. On the liner notes of the record, which is out today, the singer writes: “Last winter I was on the receiving end of a shock to the system, a shock that left me clinging on to my own life.

“Lots of us have a brush with mortality, it was an arresting experience. I won’t dwell in it or on it. I don’t want to name it. But these songs have that impetus behind them and it would feel dishonest not to admit the turbulence I was feeling at the time of writing.”

The “near-death” experience happened sometime between Christmas and New Year. The singer won’t go into the precise details of what happened but speaking to The Irish Times in London last month before their Trafalgar Square concert, The Edge confirmed the incident. Asked about Irish poet Brendan Kennelly’s advice to Bono, to write his songs as though he were dead, the Edge referenced Bono’s incident.

“It was a very serious scare he had and it did affect the way he was viewing his writing for this record,” he said.

“Where he ended up was taking Kennelly’s advice . . . a lot of these songs ended up being letters to people he cares about. Some were his and our children, some were the U2 fans, Ali [Hewson, Bono’s wife] featured obviously, and there was a lot directed to America and the current political situation.”

The Edge added that while Bono was writing he was thinking “If this is the last song I write, what do I want to say?”

The lyrics on the album were reworked after this episode. “The songs on this album can best be understood as me thinking what do I want to say to the people that I most love – on this album are letters written by me to my family, my friends, the people who come to U2 shows,” Bono has said.