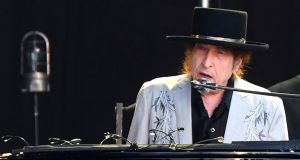 Bob Dylan has announced his first album of original songwriting in eight years. Rough and Rowdy Ways, which will be released on June 19th, follows three albums of cover versions, Shadows in the Night (2015), Fallen Angels (2016) and the triple album Triplicate (2017); his previous album of his own songs, Tempest, came out in 2012.

Two songs from the new album have been released in recent weeks. Murder Most Foul is his longest song ever, at 17 minutes, a mystical reflection on the JFK assassination that also rakes over decades of American pop culture. The shorter I Contain Multitudes saw Dylan singing: “I’m just like Anne Frank, like Indiana Jones/ And them British bad boys, The Rolling Stones… I sing the songs of experience like William Blake/ I have no apologies to make.”

He has now released a third song, a slightly more upbeat blues-rock number called False Prophet, where Dylan voices the figure in the title with a certain swagger: “I ain’t no false prophet/ I just said what I said/ I’m just here to bring vengeance on somebody’s head.”

He was due to tour Japan in April but was forced to cancel the concerts because of the coronavirus outbreak.