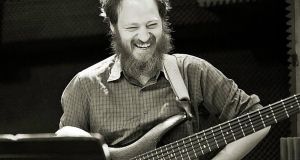 TERRA INCOGNITA
Fireplace Dragon
Courthouse, Ennistymon, Co Clare (Friday); Black Gate, Galway (Saturday); Arthurs, Dublin (Sunday afternoon); tickets at eventbrite.ie
I haven’t heard Fireplace Dragon yet, but there’s a good reason for that: no one has. The musicians in this brand new experimental trio – Japanese Berliner Keisuke Matsuno on guitar, Irish New Yorker Simon Jermyn on bass and Dubliner Matthew Jacobson on drums – have all played together in other settings, but this short Irish tour (they started last night in Kilkenny) is the first time they will perform in public as a unit. The presence of Jermyn and Jacobson promises much – they were the rhythm team behind Roamer, the breath-of-fresh-air Irish supergroup formed last year. Matsuno, who is now based in New York, is a Frisell disciple, and with Jermyn, a member of ace New York drummer Jim Black’s quartet. Surrender your preconceptions at the door and you’ll be grand.

Piano and banjo is not exactly your average line-up, but in the hands of musicians of the calibre of Chick Corea and Béla Fleck, the instruments are almost incidental. Corea, a bravura technician with cut-glass precision, has been a major figure in jazz since the release of his groundbreaking trio album, Now He Sings, Now He Sobs, in 1968. Fleck gave the world of bluegrass and Americana a thorough shake-up with the emergence of his genre-busting Flecktones, and particularly their 1991 hit album Flight of the Cosmic Hippo. Together, these two big stars search out the highways and byways that connect the two sides of American music.

The trio format of Hammond organ, guitar and drums is a line-up that punches far above its weight, thanks to the decibel heft of all three instruments. It was the great Jimmy Smith who originally set the tone for such trios, but the format received a major kick in the arse when ex-Miles Davis drummer Tony Williams formed his Lifetime trio with guitarist John McLaughlin and organist Larry Young at the end of the 1960s. Venerable Derry guitarist Tommy Halferty, celebrating his 70th year, will be in his element revisiting the music of his louder, callower youth, with rising Belfast organist Scott Flanigan and front-rank Dublin drummer Kevin Brady.

He doesn’t like the “prodigy” tag, but it’s hard to find another word more appropriate to astonishing 13-year-old pianist Joey Alexander. Born and raised in Bali, Indonesia, a nine-year-old Alexander played for Herbie Hancock while on a visit to the island, and the elder man immediately recognised a fellow pianist. So Alexander and his parents left paradise behind and settled in New York, where his technical mastery and unusual musical maturity is making every other piano player there feel just a little sick. Now a major, Grammy-nominated recording star with two best-selling albums under his belt, the diminutive pianist arrives in Dublin with his trio, featuring Willie Jones III on drums and Alex Claffy on bass.