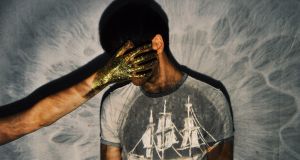 Wyvern Lingo - I Love You, Sadie
For the Wicklow trio’s first song this year, and a track that servers as a trailer for an album to come, I Love You, Sadie is a unique offering. Not only does its sound fall into an R&B pop bracket but the sentiment is a rare one, extolling the feminine qualities of a man in the face of masculine stereotypes.


SIIGHTS - Nobody Like U
Taking its inspirations from Caribbean summer jams and Bieber’s pop resurgence, Irish woman and Scottish songwriter Toni Etherson are clearly dreaming of a getaway with a special someone.


Floating Ballroom - Wolf Call
Tipperary artist Joe Geaney’s solo electronic project is so called if this suspended track built on a piano sample, percussion and effect-laden vocals is any indication.


Sleep Thieves - Is This Ready?
Primed for cinematic scenes of urban depravity and danger, the Dublin-based three-piece’s returning single is a cut-throat slice of synth-noir pop. The campaign to get Sleep Thieves playing the Roadhouse on Twin Peaks next season starts here.


Breezy iDeyGoké - Afro Fire
Breezy is a Louth rapper and producer is currently studying in Liverpool. Afro Fire is the product of a rap background, Afropop music influence and the energy of grime. house and electronic music.


NEW ARTIST OF THE WEEK
AGE
The half Irish and half Australian duo of Jenny Cosgrave and Gavin Dwight formed in East London last year and they have been diving deep into making indie electronic music. Peaks, the duo’s first song has a bright Balearic vibe suitable for the season.


ALBUM OF THE WEEK
Bear Worship - WAS
Karl Knuttel’s debut album under the moniker of Bear Worship has a hypnagogic quality to it, last heard so prominently in music when Animal Collective were at their Merriweather Post-Pavilion height. WAS also shares that Baltimore band’s giddy trippy polychromatic qualities. Knuttel’s occasionally quivering vocals also remind the listener of Grizzly Bear’s Daniel Rossen so as a result, feels out of time with current sounds. Perhaps that’s the point, as the music of Bear Worship is escapist with its heart and mind cast far away from Irish climes.