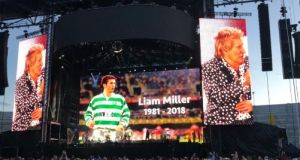 Rod Stewart paid tribute to the late footballer Liam Miller, at his concert in Páirc Uí­ Chaoimh in Cork on Saturday night, posting a picture of the former Republic of Ireland, Manchester United and Celtic player on the big screen of his stage.

Stewart’s gesture was appreciated by the thousands of fans who attended the Leeside gig.

Stewart, a lifelong Celtic fan, said he had planned to say so many things to the Irish crowd but had forgotten them all after his team saw off the challenge of Hearts by a margin of 2-1 at the Scottish Cup final – giving the Glasgow club their ninth domestic trophy in a row.

Stewart travelled to the Royal Yacht Club in Crosshaven for lunch before watching the match.

Páirc Uí­ Chaoimh hosted a tribute match for Liam Miller who died of oesophageal cancer in February 2018, and in an interview with the Irish Examiner earlier this year Stewart said that “more teams should do it [what Ireland and Manchester United did for Liam Miller]. That’s the positive side of the game.”

At the concert he posted pictures of various Celtic heroes with an image of Miller receiving huge applause as Stewart said “What about this guy?”

Miller began his career with Celtic and was later loaned to Aarhus in 2001. He returned to Celtic Park and broke into the first-team squad during the 2003–04 season.

The Liam Miller tribute match which took place last September raised €1.5 million which was donated to the family and to various charities.