Too many cooks: what happens when ensembles go large? 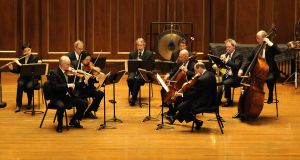 The Wikipedia entry on Persimfans is very curt. Persimfans, it explains, “was a conductorless orchestra in Moscow in the Soviet Union that was founded by Lev Tseitlin and existed between 1922 and 1932. Its name is an abbreviation for Pervïy Simfonicheskiy Ansambl’ bez Dirizhyora (First Conductorless Symphony Ensemble).” That’s all it says.

Persimfans was an unusual experiment, a musical pursuit of a collectivist ideal, started in a decade in which the Soviet Union also embraced a kind of daring artistic exploration that would become anathema in the 1930s, Persimfans actually came into existence six years before the Red Army Song Ensemble, a group that is still active today as the Alexandrov Ensemble.

The conductorless orchestra played new music as well as established classics. Inevitably, there had to be a lot of rehearsals and the seating plan had to be highly unconventional. Most of the musicians sat facing each other in two groups on the stage, the ones on the left and the right looking at each other over a bank of music stands in the middle. That large grouping was surrounded by a single row of players, and those at the front actually performed with their backs to the audience.

Chamber music may be in the festival’s name, but director Francis Humphrys was a huge Wagner fan in his youth

The great German conductor Otto Klemperer heard the orchestra in Beethoven and Tchaikovsky, and found himself asking the very serious question, “Is a conductor really necessary?” Unsurprisingly, he came down on the side of his own profession. Prokofiev and Milhaud were among the composers who worked with the orchestra, and Milhaud, while impressed, wryly remarked: “A conductor would have obtained the same results, no doubt a little faster”.

What has me thinking of Persimfans is the visit to the National Concert Hall by an ensemble from the other side of the world, the Boston Symphony Chamber Players. And I also found myself comparing their style of playing with what can be found in the larger works that find their way into the programmes of the West Cork Chamber Music Festival.

Chamber music may be in the festival’s name, but director Francis Humphrys was a huge Wagner fan in his youth, and each year he usually manages to find space for music with a genuinely orchestral dimension.

But it’s not that orchestral dimension that the Boston players had me thinking of. Their opening work was the 1986 Dixtuor by French composer Jean Françaix. That’s a “decet” in English, and the rarity of the word is an accurate reflection of the rarity of works conceived for 10 players. Septets, octets and nonets are a dime a dozen by comparison.

Françaix was a composer who, in his own words, wanted to “give pleasure”. His speciality was lightness and deftness in manner and material, and he had an acute ear for the appeal of instrumental combinations. His Dixtuor is true to form, and the Frenchman’s general approach was matched by American composer Michael Gandolfi’s 2005 Plain Song, Fantastic Dances. You could almost guess this from movement titles such as Tango Blue and Quick Step, though the colouring of the music is not quite as refined as in the Françaix.

The evening’s two classics were Mozart’s Oboe Quartet and Beethoven’s early Septet, which is scored for the same instrumental combination as the Gandolfi.

It was here that the Boston players came into their own. The music-making was marked by its exceptional ease and grace and by an uncommon communal unselfishness. Nothing was obscured. Every musical strand was presented with a kind of perfect integrity. This gave the feeling that everything the composers put in these scores was available to the ear without compromise. It was as if you could be anywhere and everywhere inside the music at the same time.

And what’s this got to do with Persimfans and West Cork? Well Persimfans clearly based its work on the principles of long exposure and mutual understanding. That’s exactly the same principle that’s behind the work of the string quartets who form the core of the programming in West Cork.

But Bantry does not always approach other combinations the way it approaches string quartets. Its mix-and-match style means that some of the groupings that play there, from duos and trios to octets and nonets, may have no history of togetherness. In fact, some of them may never have met, let alone played together, before they collaborate at the festival.

This makes for some exciting, dangerous, unpredictable and edgy music-making, often with a sense of living in the moment that can keep listeners on the edge of their seats.

But the rewards diminish as the heterogeneity of the ensembles grow. Mixed ensembles of seven, eight or nine players rarely reach entirely satisfactory balances of intent or delivery in the rehearsal time that’s available to them. The thrills tend to be those of a hair-in-your-face out-of-doors ride. And, musically speaking, the high points are often individual rather than collective.

Does this mean that there is a double standard at work in Bantry? Actually, yes. You just don’t find there any string quartets assembled specially for the occasion. It’s as if the form is too sacred to be given to anything other than long-established ensembles. For virtually any other form it’s open season. It’s basically Persimfans without the long preparation.

The Boston Symphony Chamber Players served as a reminder that the standards of the string quartet world can be applied equally rewardingly to larger-scale chamber music, too.