‘Baby Shark’ played by US city to deter the homeless 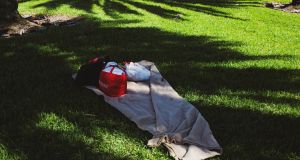 A blanket used by a member of the homeless community in West Palm Beach, Florida, US. Photograph: Saul Martinez/The New York Times

City officials in West Palm Beach, Florida, US, are using extremely catchy children’s music to try and drive away homeless people from one of its civic buildings.

The city’s mayor, Keith James, confirmed to Fox News that the songs Baby Shark and Raining Tacos were being played at the patio of the Lake Pavilion, where homeless people have been living.

The pavilion is a banqueting venue that hosts weddings and other events, and brings in $240,000 (€214,000) of annual revenue. Mr James complained of finding human faeces and other “unsanitary things” around it.

“It [playing the songs] has been effective and is a temporary measure to make the area accessible for those who have rented the facility and for future events,” said Leah Rockwell, the city’s director for parks and recreation. “We are not forcing individuals to stay on the patio of the pavilion to listen to the music. The music is heard only if you are on the patio, a very small area relative to the rest of the waterfront.”

The city previously attempted to use classical music to deter drug dealers, but the unit powering the speakers was smashed.

One homeless man Fox News spoke to said the children’s songs hadn’t been enough to move him on. “I still lay down in there,” Illaya Champion said. “But it’s on and on, the same songs.”

Pinkfong’s 2016 song Baby Shark has become a sensation among children – and their embattled parents – gaining more than 3 billion views on YouTube, making it the eighth most viewed video of all time. Beginning in August 2018, it spent 42 weeks on the UK charts, reaching a high of number 6. Raining Tacos, an upbeat tune by Parry Gripp about the meteorological phenomenon of the title, has earned 31 million views on YouTube since it was published in 2012. – Guardian