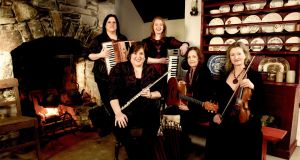 Cherish the Ladies play at the TradFest Gala on Saturday 25th

Fifteen years on and this spark of an idea to bring traditional music into the heart of Dublin’s Temple Bar to light up the dark days of January now lights up a raft of city centre venues and lures remarkable numbers of punters to the most unlikely venues. The brainchild of Donegal fiddle player Dermot McLaughlin, TradFest Temple Bar is a broad church. Its appetites are eclectic, its audience is diverse and its programme runs the gamut of pub sessions, sean nós and genealogy workshops and gala concerts in venues as diverse as The Printworks at Dublin Castle, the Olympia Theatre, the Pepper Canister Church, City Hall and Kilmainham Gaol. (Clearly, TradFest’s definition of Temple Bar is akin to that of Sliabh Luachra: a place whose boundaries are defined not so much by geography as by the imagination).

Live sessions have always been a foundation stone of TradFest and this year’s programme includes Australian singer Steph Grace at The Porterhouse on Thursday, January 23rd and Hidden Stills, aka Mildred Fox and Christian Hind at The Morgan on Friday, 24th and The Oak Bar on Saturday, 25th. Singer/songwriter Aoife Scott launches her new second album, Homebird, at the Button Factory on the opening night, Wednesday, January 22nd, so there will be ample opportunity to hear newly minted music alongside traditional tunes.

The TradHub is a showcase event, introducing new music to agents and managers and is run in association with Milwaukee Irish Fest so that the best live act here will perform at Milwaulkee Irish Fest in the US in August.

Traditional music has always been a family affair with young musicians nurtured by older generations and the Tradkids strand of TradFest will see an open trad session for kids and The Ukelele Céilí – a family workshop – both taking place on Sunday at The Ark in Temple Bar.

This is the first year that some of the headline events will take place in the Olympia Theatre, a welcome addition of an atmospheric venue to TradFest’s roster. It’s the ideal setting in which to hear the Afro Celt Sound System who will share the bill with Scottish folkies Skipinnish and the Isle of Skye band Peatbog Faeries on Sunday night.

The resurgence of the banjo continues apace with newcomers Boxing Banjo bringing a mix of traditional, old time and bluegrass banjo licks to the party, alongside two northern bands, Connla and Réalta, on Friday. The high-octane Bonny Men will launch their new album, The Broken Pledge at Lost Lane at a lunchtime gig on Sunday, anchored by the authoritative piping of Maitiú Ó Casaide.

And headliners abound throughout TradFest. Kevin Burke, fiddle player and founding member of The Bothy Band promises to be a real treat when he plays a very special solo concert at the Pepper Canister Church on Saturday morning, the same venue having been warmed up on the previous night by actor and singer Lisa Lambe.

Seth Lakeman, Barbara Dickson, Hothouse Flowers, Muireann Nic Amhlaoibh and Gerry O’Beirne, and the irrepressible Séamus Begley with Téada’s Oisín Mac Diarmada and Samantha Harvey add further colour and shade to what is a crammed programme. Temple Bar is a magnet for tourists and this year’s TradFest will certainly draw more than its share to the city, but there’s a whole heap of events for the sometime local trad fan and the purist alike. That’s probably what makes this winter festival a law unto itself: where lateral thinking reigns and where emerging musicians and dancers can share billing with those who’ve notched up the road miles and the experience – and who are happy to share it.