Angel Olsen: ‘I want to burn the house down, that’s the vibe I want to set’

‘Every time I play there, I always tell myself: This is gonna be a sober Irish show’ 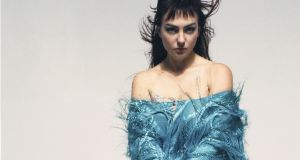 ‘I feel like I’ve been in denial of the fact that when I write my best, it’s usually when something terrible has happened.’

It’s 3pm in Asheville, North Carolina, and Angel Olsen is sipping on apricot brandy. “It’s been a long day already,” she laments, adding that she desperately wanted to end her forthcoming European tour in Ireland, to no avail. “Every time I play there, I always tell myself ‘This is gonna be a sober Irish show. I am going to be sober.’ But no matter what, I wake up the next day feeling like I am a walking human example of purgatory.

“I made this joke earlier on in my career . . . we played New York and I emptied out a bottle of tequila and poured water in it. I thought it would be really funny to take it on stage and just gulp it – just to make fans think that I was completely out of it. But now, it’s actually a real problem,” she jokes, cackling loudly. “No, it’s fine. I see my therapist, I go to acupuncture, I take breaks, I’m trying to run. I’ve got an underactive thyroid so I have to work out twice as much as everybody. But y’know, life sucks for a lot of people and it will just continue to get worse if you continue to see all the worst things about it. So I guess I’m trying to enjoy the small things more and more, know what I mean?”

If you already know Olsen’s material – gut-spillingly powerful, dizzyingly versatile and unafraid to take risks from album to album – you’ll be aware that she’s not the type to hold anything back. Her 2012 debut Halfway Home set her out as an uncompromisingly confessional songwriter. 2014’s Burn Your Fire for No Witness proved her breakthrough album, intrigue and romance set against a soundtrack of bristling indie rock and alt-country. 2016’s My Woman changed tack again, an album encompassing classic rock ‘n’ roll, 1960s girl groups and dreamy, synth-laden ballads.

I just write the songs and sing ‘em. I’m not a special human


Her fourth album All Mirrors is similarly unpredictable, although no less intriguing. The press release sees her describe it as “about owning up to your darkest side, finding the capacity for new love and trusting change, even when you feel like a stranger”. That sense of vulnerability is strewn brazenly throughout her lyrics.

“I feel like I’ve been in denial of the fact that when I write my best, it’s usually when something terrible has happened,” she laughs. “I don’t know if it’s just me being self-absorbed because I do this so often, but my life feels uniquely interesting, for whatever reason – and things just keep happening in my life like rapid hellfire. I’m not a very religious person, but I do feel that there’s something that brings us all together. I guess I feel that more and more as I get older. Even just doing yard work, and doing simple things, I find myself thinking about my life in a more symbolic way.

“And because of the things that have happened to me over and over again – whether they be patterns or just situations, or maybe it was the way that I thought – it just made me a more and more descriptive person when it comes to writing. I feel like I’ve been writing a lot lately that’s not just ‘songs’; it’s my life, y’know? So this record is just a part of my life. There’s definitely stuff that I hope I can relate to down the line . . . but I also hope that I don’t have to relate to it forever.”

Olsen became known as an “indie” artist after Burn Your Fire for No Witness, but it’s not a label that she particularly identifies with.

“I’m an independent artist and I’m on an independent label, but the connotation of ‘indie’ kind of reminds me of early 2000s,” she says. “So it doesn’t really do much for me when I hear it. I try to give my all in interviews, and I try to give my all in photoshoots, and I try to give my all whenever I’m doing radio, or any promotional work regarding the record. But the truth is, I just write the songs and sing ‘em. I’m not a special human; I don’t care if you wanna call it indie, or country, or rock ‘n’ roll, or pop, or folk – or if you don’t even care about it at all. It’s just what I’ve been able to do and somehow get away with doing for some many years.”

After the release of My Woman, she went out on a solo tour to promote Phases in 2017 – an album of B-sides and rarities, where she began playing some of the songs that ended up on All Mirrors. The intention was to create a stripped-back, exposed album to match the lyrical vulnerability of these songs – her version of Springsteen’s Nebraska, she says – but having finished the recording sessions, she realised that they needed something bigger, bolder and weirder. The project was originally conceived as a dual release of both albums, but that stripped-back set was held back.

Olsen says that even she was surprised by how some of the songs turned out. Opening track Lark sets the scene in spectacular fashion, drawing on dramatic strings provided by a 14-piece orchestra. At times, it sounds like Scott Walker tackling a skewed Bond theme.

“I want to burn the house down, that’s the vibe I want to set,” she says, only half-joking. “That song was the hardest one for me to imagine strings to, and it ended up working out really well; I thought that was going to be a completely different song, a rock ‘n’ roll, Velvet Underground kind of song, or something. And I didn’t know that I was going to use as much synth on the record; I just thought it would be for one or two songs. And Spring – I always wanted it to sound like Fripp & Eno. It kind of has that, but the piano part that I wrote for the beginning of it sort of sounds like some John Lennon song. I wasn’t sold on the opening part for a really long time, because it felt rigid at first. And then I just fell in love with it and thought, ‘Wow, I can’t believe I wrote that in a matter of minutes.’

“I mean, sometimes you need to go to a yoga class to make sure you do yoga – and sometimes I need someone to come to my house and be like, ‘You have three days to write two songs – do it now. Well shit, okay!’” she laughs. “But having said all of that, I didn’t intellectualise it that much. I just wanted to make stuff sound interesting. I thought that it’d be a mixture of rock ‘n’ roll band, a mixture of piano stuff, a mixture of synths . . . I was really figuring it out as I went.”

When it came to writing lyrics, the idea of projecting your emotions onto other people quickly came to the fore, as heard on the title track – as well as a sense of self-examination that she had not been so brazen about in the past.

The truth is, we’re always projecting; good or bad


“I became really obsessed with this idea of shadows,” she explains. “My friend and I were talking about how Carl Jung’s theory that everyone has a shadow – and to be aware of it takes a lifetime to fully understand. Your shadow is part of you that you possibly need to work on, and you don’t realise that it’s stuck in a pattern of doing things you actually hate. A lot of the time, we talk about ‘projecting’, as in ‘You’re just projecting on me’; we talk about it to each other negatively. But the truth is, we’re always projecting; good or bad. And that’s what I obsess about, honestly. I think that’s been a constant theme in my life, but I don’t think I’m alone in that experience. So I just wanted All Mirrors be the title of the record, because I felt like a lot of these songs were just relating to that and those kinds of confrontations.”

Four albums in, and it sounds like Angel Olsen is starting to understand herself a little better. This whole album, she agrees, has been a huge learning curve.

“I could spell out the meaning of every song and how I wrote every song, and what the album means to me, and what it’s about, and intellectualise the title and all these things. But the truth is, I spent an evening trying to reflect on and trying to understand what the f**k I was talking about, and I still don’t know,” she laughs. “I hope what people take from it is that even if it’s just them ‘projecting’ onto my songs, that they don’t feel as isolated in their thoughts. That they feel that they can relate to the material, and it can help them make peace with it. And I hope that they can have fun with it. Obviously it’s a more serious record than others, but I hope that people find what they need in it. And if they don’t,” she knowingly smiles, “then maybe the next one will be a different vibe.”

All Mirrors is released on Jagjaguwar on October 4th.

Ruth Fitzmaurice: ‘My husband died but I still believe in magic’