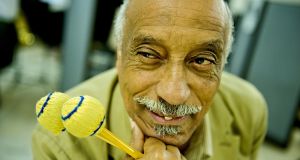 Admired by Duke Ellington, sampled by Kanye, adored by hipsters everywhere, vibraphonist Mulatu Astatke is known as the “father of Ethio-jazz”, the deeply grooving hybrid of 1950s jazz and east-African traditions that emerged in Addis Ababa in the early 1970s. Astatke was the first African student ever to enroll at Berklee College of Music in Boston and five decades later, he’s still swinging his mallets, still shining his unique light on the connections between post-bop jazz and African rhythms. An extra date has been added on Monday night to meet demand. CL

New Ross piano festival, until now a bastion of classical music, breaks its jazz duck this year in spectacular fashion. When the organisers of this excellent, piano-focused festival asked leading Dublin jazz pianist Phil Ware to choose a jazz musician, Ware went straight to the top drawer: Enrico Pieranunzi is rightly regarded as one of Europe’s greatest jazz musicians, a master of the keyboard who combines the vivacity and swing of classic American jazz with a lyricism and refinement that connects him to the deeper traditions of European classical music. The 67-year-old Roman’s distinguished discography numbers some 60 titles stretching back to the mid-1970s, and includes Charlie Haden’s classic Silence with trumpeter Chet Baker and Pieranunzi’s own Live at the Village Vanguard. A solo performance from this jazz master at New Ross will confirm what some of us already knew – that jazz is preparing to take over as the art music of the 21st century. Ware also appears himself in the afternoon with bassist Damian Evans. CL

Much-loved and admired vocalist Honor Heffernan has been Ireland’s top jazz singer, there or thereabouts, for the last few decades, and even just singing standards in a darkened basement, she is a riveting performer, combining the talent of a senior jazz musician with the power and pathos of a leading lady. Whistling Girl is something more, a show of her own devising – with her partner and collaborator, pianist Trevor Knight – adapting the words of Dorothy Parker into a cabaret of wit and wisdom that will satisfy aficionados and civilians alike. CL

The news that saxophonist Michael Buckley has embarked on a new Thursday night residency in the centre of Dublin will be music to the ears of many. The city has been without a regular session of this quality since the passing of Louis Stewart, and for those with a taste for the post-bop of Coltrane, Henderson and Brecker, Buckley’s new quartet, Dublin Standard Time – with extravagantly talented Venezuelan pianist Leopoldo Osio, and the A-team rhythm section of bassist Dave Redmond and drummer Kevin Brady – will be required listening. But live jazz is a precarious undertaking at the best of times and the way to ensure that regular sessions like this survive is to, you know, go regularly. CL