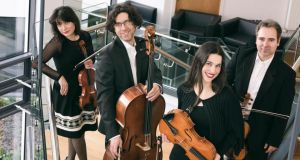 Dublin-based, St Petersburg-born German pianist Elisaveta Blumina offers a stream of unusual, mostly Russian miniatures at the Hugh Lane Gallery. Her sequence runs from excerpts from Sergei Prokofiev’s Visions fugitives (1917) through Mieczyslaw Weinberg’s Children’s Notebooks (1944-45) and Galina Ustvolskaya’s 12 Preludes (1953) to Grigory Frid’s Hungarian Album (1966). Also on the programme are a selection from Georgian Giya Kancheli’s Songbook (an ongoing collection begun in 1966) and Ukrainian Valentin Silvestrov’s Two Waltzes (2009), which are dedicated to Blumina, and which she has recorded on the Grand Piano label. Michael Dervan

The RTÉ Contempo Quartet’s big project for the 2017-18 season is touring a complete survey of Beethoven’s string quartets, and the first instalment is underway. Each concert will pair Beethoven with pieces by Irish composers, among them newly commissioned works from Raymond Deane, Deirdre McKay and Andrew Hamilton. The other featured Irish composers are Kevin Volans, Ina Boyle, Jane O’Leary, Ian Wilson, Deirdre Gribbin, and John Kinsella. The opening programme features Brian Boydell’s prizewinning First String Quartet of 1947 in the company of Beethoven’s Quartet in F, Op 18 No. 1, and his Quartet in F Op 59 No 1. MD

There’s actually nothing baroque and nothing orchestral in the Irish Baroque Orchestra’s latest concert series at St Ann’s Church in Dublin. Never mind, the fare is good. Tonight’s opening concert includes Mozart’s Eine kleine Nachtmusik and Musical Joke with Beethoven’s Duet for Two Eyeglasses – don’t mind the name, this is actually a duet for viola and cello. The second programme include Mozart’s Oboe Quartet, his Duo in G for violin and viola, and his Serenade in D K251. The final offering on Saturday runs to Beethoven’s Sextet in E flat, Op 81b and his Septet, Op 20, a work whose popularity was so great that the composer came to resent it! MD