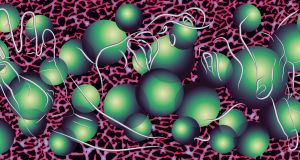 “What would you call them?” artist Niall Sweeney says early in our conversation. The question is rhetorical, but borne of an inability to describe the green, spherical objects featured in one of his immaculate silk scarves. “Atoms? Particles?”.

I suggest peas that have fallen from a freezer bag, now destined to be kicked under the fridge because you’re too lazy to pick them up.

“Well,” he says, “it started off as a pile of pearls cut off from their string, so maybe there’s something there.” His attention shifts to another scarf. “Then there’s that peach-like object which is pierced by a needle, I mean, what is that?”

It’s disarming to hear an artist grapple with their own work in the way a stranger might, but Sweeney is gratifyingly unpretentious. An artist and designer, he’s talking me through his latest exhibition, I Am The Cosmos. The show collects eight prints and two silk scarves, whose colourful, surreal designs embody everything from the fabric of the universe to high heel shoes. These unlikely combinations are intended as a feature, not a bug.

“Oh I’m fascinated by chemistry, the cosmos. Jesus, I don’t want to go off on one.”

I assure him that I would very much like him to go off on one.

“Well, I was brought up in the era of Carl Sagan’s Cosmos, the original series. I was a major sci-fi kid, so when you combine that with all the other stuff I became interested in, I think it makes for an interesting mix”.

The idea for this show, he says, came not from the call of the cosmos, but the allure of scarves, and their unique strength as a vehicle for expression.

“I’d done some silk scarves a couple of years ago,” he says. “Giant ones, totally impractical, really. So I’ve always been interested in them historically and culturally, but also because they are just beautiful things. It’s a lovely medium; you can put anything on them. It’s amazing how ‘radical’ scarves can be, even on someone who might be dressed conservatively; it’s a great canvas for expression”.

How did the idea develop from there?

“I was just itching to make more silk scarves, doing drawings, but there was no moment where I thought: ‘I’m going to do make it all somehow about the cosmos’. Things just happen and a mood gathers its own speed. That’s when everything becomes interesting and exciting. It fell into place with a couple of things in the studio and the drawings I was doing quickly evolved into the strange objects that they are now”.

Sweeney now lives in London where, in 2000, he and his partner formed Pony Ltd, a design agency that’s worked for clients as diverse as Jameson, Pantibar, and visionary Thai film director Apichatpong Weerasethakul.

When I mention that his scarves, with their eclectic mix of disparate images, remind me of the Sesame Street game, he says: “One of these things is not like the other.” He sees a direct route to these works from his childhood in Dublin.

“That’s it exactly,” he says. “My upbringing was Sesame Street, Maurice Sendak and [terrifying German children’s book] Struwwelpeter. I also grew up in a super-European household. There was a massive embrace of the future and people, of Europe and the world.”

Having come from the north of England and settled in Dublin, Sweeney’s mother, in particular, emphasised this sense of continental connection. “My mum,” he says, “amazing woman – a super modern person. She lands in Dublin and is like: ‘I’m just going to make this my city’. So almost immediately she’s involved with An Taisce, with the Wood Quay protests, and anything to do with conservations. I remember Micheál Mac Liammóir and Hilton Edwards used to call the house on Saturday mornings, and tell her to round up the girls [her network of conservationists] and they’d go into town to stop them chopping down trees.”

Margaret Sweeney later served as president of the European Environmental Bureau for 10 years. She was the first person to contact her son that day in June 2016 when the United Kingdom voted to leave the EU.

“London is my home now,” he clarifies, “but people here are nervous. I was away when the Brexit vote went on, and I went to bed thinking Remain was going to through and then in the morning all these things came through on my phone and my mum was the first message. She wrote: “I remember when Chamberlain announced the second World War on the radio, and I remember how sick I felt then as a child and I haven’t felt as sick as that until this morning.” He pauses for effect, before breaking off to laugh at his mother’s stirringly dramatic reading of events.

This exhibition will be the first in Dublin since his HEAD series of 60 monochrome paintings, at the RDS in 2017. It will also be the first in Hens Teeth artspace in Dublin’s Blackpitts area. The venue recently secured crowdfunding for its relocation as a dedicated creative hub, having being forced out of its previous premise on Fade St, from a building now slated to become a hotel. For Sweeney, it seems a far cry from the cultural landscape he left behind in the late 1990s.

“I think it’s an incredible testament to Hens Teeth that they managed to sidestep a lot of the issues going on at the moment. I mean, Dublin having however many hundred hotels, all these places closing, it’s not normal. Some closures are natural, places can come to the end of their run, but that’s not what’s happening here. Dublin planning has always been so strangely eager for property development.

“In the 1990s almost all of my friends were running clubs; the alternative Miss Ireland crew were friends, and Panti of course, Eamonn Doyle from D1, all at the same time and it was all really DIY ethic but the opportunity was there to do things. If you wanted to run something, to open a pub, you were able to do it somewhere down the quays. Now, obviously, it was a different time, I’m not saying let’s all go back to that moment but it developed into this thing where individuals who were doing their own thing, whatever that thing was, developed a whole way of working.”

That work he and those friends did were pivotal in Dublin culture at the turn of the millennium and beyond. Would he ever do a retrospective?

“I’m interested,” he says, “but my work involves so many other people. Alternative Miss Ireland is a good example because it involved 100 volunteers on the night itself but a core team of about 30 people, all with different lives and doing different things, involved in each other’s lives in loads of other ways, but we all came together like an interchange station, a Kings Cross, for this one event every year and then we’d all channel off into our own different things again. If I was to do a retrospective, it would be about that crossover flow. That would be a nice way of looking at it; the connectedness, or disconnectedness of things, rather than a fancy art book.”

In a parting thought, he says: “That’s the essence of the cosmos . . . Constellations – literally the bringing together of stars, giving them shape to make sense of something, and that something often involves faces or animal shapes.”

Peas or pearls, I say.

“That’s all the brain does, it’s why it looks for faces – that’s why there’s a man on the face of the moon. Even highly abstract images, two dots and a pair of eyes can become a face. That’s an incredible leap. That or a drawing of a peach with a needle through it; it’s just two separate things that should never have been brought together.”

Niall Sweeney: I Am The Cosmos, will open the Hen’s Teeth gallery space in Blackpitts, Dublin 8, November 7-11

The movie quiz: how many best picture Oscars has Disney won?
6