Look at this picture. What do you see? 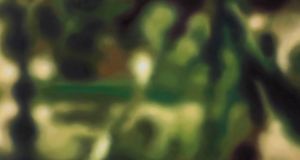 I’m in Dublin’s Kerlin Gallery. It’s one of those art spaces that makes you feel the need to whisper: all pure white walls and lofty aspect. But today a woman is breaking the normal gallery rules and is speaking in a clear loud voice, to an older woman, who is leaning on a walking frame, her face just an inch or so from one of the paintings.

“There are flowers, bright sunlight. It’s a summer’s day,” the younger woman is saying, about the more or less purely abstract artwork on the wall.

When I first walked in, I couldn’t see too much of anything in the paintings, although something in them seemed to be trying to reach out. But somehow, as the woman speaks, I start to see it too.

I want to follow them and discover more about how to see what I’m looking at.

The exhibition, Loje, jelo, laso, is by Eoin McHugh, and the woman, a young baby asleep in a sling wrapped around her, is the artist’s wife. She is describing the works on the wall to McHugh’s great grandmother who, at 100 years old and now with failing sight, has been going to his exhibitions from the beginning.

Opposite the dreamy, abstract paintings, there is a series of framed pages from the artist’s sketchbooks. They show you both what’s been going on inside his mind, and what a brilliant draughtsman he is. I get the sense he grew bored, or impatient, with being able to depict pretty much anything from our physical reality, and wanted to get stuck in to trying to show what lies beyond, beneath, or wherever you think a deeper reality happens to reside.

The trio have moved on to the next painting, but I keep being drawn back to the one in which I can now see nothing but the feeling of a brilliant, lush, floral, endless summer. It reminds me of a passage in The Goldfinch, Donna Tartt’s 2013 novel, more recently made into a rather lacklustre film, where antiques dealer Hobie is trying to explain to the book’s anti-hero, Theo, why art matters: “…if a painting really works down in your heart and changes the way you see, and think, and feel, you don’t think, ‘oh, I love this picture because it’s universal. I love this painting because it speaks to all mankind’. That’s not the reason anyone loves a piece of art. It’s a secret whisper from an alleyway. ‘Psst, you. Hey kid. Yes you.’ An individual heart shock.”

Art frequently needs words, and abstract art needs words most of all: it’s not a question of telling people what to like, rather of opening a door, so that the work’s individual whispers can come through.

McHugh’s exhibition, it so happens, turns on words. “Loje, jelo, laso” comes from Toki Pona, a language created in 2001 by Canadian linguist Sonja Lang, with the aim of simplifying communication and thought. “Loje, jelo, laso” translates as “red, yellow, and blue and green”.

You might wonder why the world could need a whole new language, but Lang’s intentions included encouraging a focus on essentials through simplicity, and facilitating positive thinking – based on the idea that language inflects how we think and act. With that in mind, the words that are usually wrapped around art are the opposite of simple. Problematic juxtapositions, amplifying dialectics and seminal discourses couldn’t be more off putting. It’s as if the makers, or the purveyors of art aren’t secure enough in what they do to simply open that door and see what whispers come through.

Back in the Kerlin, McHugh has taken over the role of describing the works to his relative. They are looking at a large ink and watercolour work on the end wall. Although in black, white and shades of grey, it seems to have a lot in common with Hieronymus Bosch’s 15th century Garden of Earthly Delights. McHugh is glossing over the bit where the central figure, a reclining elderly male nude, has an erect penis with a head the same as that of its owner. Instead he speaks of the huge shaft of dazzling sunlight, and mentions the birds, fluttering around the figure, “like Saint Francis”, he says.

The whole experience has made me hyper-aware of the power of words to shape what we see, and how we feel about what we are seeing. And then I stop to wonder what it means to someone, to have something they cannot see described to them, and to wish to be close to an art work, even if they cannot touch or visually absorb it. And then I think that, perhaps, that is a certain quality of really good abstract art: it gets us closer to the things we can’t see, touch or fully comprehend. Like Toki Pona, it’s another measure of the barrier between us and everything beyond language, and our endless desire to overcome it.