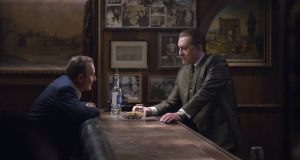 Joe Pesci and Robert De Niro in the new Netflix film, The Irishman. Using a new test feature, the 210-minute film could be watched in less than three hours. Photograph: Netflix

Netflix is facing a backlash from film-makers over a new test feature that allows viewers to watch their content at different speeds.

After tech sites spotted the new option on the app, the streaming giant confirmed that it was trialling the feature which would mean downloaded films and shows could be watched at either a slower or faster pace on a smartphone.

The move has caused anger from film-makers including Judd Apatow and Brad Bird. Trainwreck and Knocked Up director Apatow, who co-created the Netflix series Love, tweeted out his concerns earlier today.

“Don’t make me have to call every director and show creator on Earth to fight you on this,” he wrote. “Save me the time. I will win but it will take a ton of time. Don’t f**k with our timing. We give you nice things. Leave them as they were intended to be seen.”

No @Netflix no. Don’t make me have to call every director and show creator on Earth to fight you on this. Save me the time. I will win but it will take a ton of time. Don’t fuck with our timing. We give you nice things. Leave them as they were intended to be seen. https://t.co/xkprLM44oC

Whelp— another spectacularly bad idea, and another cut to the already bleeding-out cinema experience. Why support & finance filmmakers visions on one hand and then work to destroy the presentation of those films on the other??? https://t.co/T7QdYAQGHU

Bird, whose films include The Incredibles and Mission: Impossible — Ghost Protocol, tweeted that it was “another spectacularly bad idea” as well as “another cut to the already bleeding-out cinema experience”. Spider-Man: Into the Spider-Verse co-director Peter Ramsey also tweeted: “Does everything have to be designed for the laziest and most tasteless?” while Ant-Man director Peyton Reed wrote: “This is a terrible idea, and I and every director I know will fight against it.”

The Breaking Bad star Aaron Paul also shared his dismay over the news. “There is NO WAY Netflix will move forward with this,” he tweeted. “That would mean they are completely taking control of everyone else’s art and destroying it. Netflix is far better than that. Am I right Netflix?”

The platform has previously received backlash over its option to skip the intro of certain titles.

The new trial feature, captured above and currently only available on a small subset of Android devices, allows viewers the opportunity to play content at half the regular speed all the way to one-and-a-half times the speed. It’s a practice that’s more widely used in the world of podcasting, allowing listeners to consume episodes at a greater speed.

“We’re always experimenting with new ways to help members use Netflix,” a Netflix spokesperson said. “This test makes it possible to vary the speed at which people watch shows on their mobiles. As with any test, it may not become a permanent feature on Netflix.”

The news arrives just weeks before their longest original film to date, Martin Scorsese’s 210-minute crime drama, The Irishman, which Vanity Fair now points out would now be consumed in under three hours. Netflix, which has recently increased its release of viewing data, counts more than 70 per cent of a movie or episode as a watch. – Guardian