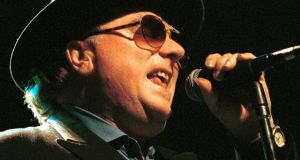 Van Morrison recently suggested that we need to ‘stand up, speak up and fight the pseudo-science’ about Covid-19.

Can we organise a moratorium on the “I never liked [bad person’s] work anyway” construction? The idle boast has been around for a while — no doubt, in the wake of Euripides’ sex scandals, graffiti declared that “I never liked Medea, anyway” — but it has gathered pace in the last six months.

There was a lot of this following Van Morrison’s recent suggestion that we need to “stand up, speak up and fight the pseudo-science” about Covid-19. “I don’t think it would hurt for the rules to be relaxed for the 5 minutes it takes Van Morrison to play his only good song,” someone wrote on Twitter. Morrison enthusiasts were genuinely baffled as to which tune was being referenced. Moondance? Into the Mystic? Tupelo Honey? Jackie Wilson Said? The answer, apparently, was Brown Eyed Girl.

We had a bit more during the micro-kerfuffle surrounding Mary Lou McDonald’s announcement that Woody Allen was among her favourite directors and that his “work stands still on its own two feet”. You could scarcely move in cyberspace for people informing us they’d never enjoyed Annie Hall and that Zelig left them cold (we’ll return to Manhattan in a moment).

Ariel Pink, southern Californian hypnagogic pop eccentric, is a more obscure figure than either Allen or Morrison, but, following his attendance at the protests outside the US Capitol building (not the storming itself), enough people were suddenly aware of his music to start the next wave of Never Liked [X] Anyway. “‘I never liked Ariel Pink’ is the new ‘I never liked Grimes,’” writer and academic Emily Pothast quipped sharply.

There is a serious side to this. One sensed awkwardness last week when media engaged with Phil Spector’s death. Convicted of murdering Lana Clarkson in 2009, the music producer had long ago been exiled from decent company, but, uncomfortable though this truth may be, it was his early professional accomplishments – not his habitual brutality –  that secured him a place in the obituary columns. Both things had to be addressed in headlines. Some got this right. Others did not.

Ronnie Spector, the deceased’s former wife, who had been subjected to years of psychological torment, addressed her own divided feelings succinctly in a tweet. “He was a brilliant producer, but a lousy husband. The music is forever 1939-2021,” she wrote.

Anyone could be forgiven for now approaching Spector’s productions with some discomfort. The further back in history we go the easier it is to divorce the art from the artist. When the offenses are fresh in the mind and those affected are still alive, it is, however, not unreasonable to shiver when encountering the culprit’s work.

Something different is afoot with a piece like Woody Allen’s Manhattan. Viewed in the wake of Dylan Farrow’s (vehemently denied) accusations of sexual molestation, the story of a middle-aged man’s justification for his affair with a 17-year-old high school student now seems — to risk a euphemistic hedge — extremely ill-judged. Young women are forever falling for older men in Allen’s films. This is just the most egregious example.

We are, however, dealing here with a specific critique bolstered by later controversies. The apparently unstoppable desire to confirm that, long before any outrages were apparent, you had, for aesthetic reasons unrelated to the subsequent offence, come to see through the artist under discussion is more suspect. It is entirely possible you never liked Van Morrison’s records or those of Morrissey (“Everyone ultimately prefers their own race”) or Nick Cave (“Cancel culture is a bad religion run amuck”), but it does you no particular credit to announce that now.

Every now and then we encounter the converse of this phenomenon. Recall the desperate efforts, not entirely abated, of urban hipsters – then simultaneously making a cult hero of Ariel Pink – to love the perfectly adequate records of the Dixie Chicks following that band’s brave criticism of George W Bush before the 2003 invasion of Iraq.

Do we really believe that quality alone propelled Taking the Long Way, the Chicks’ indifferently reviewed 2006 LP, to the Grammy for best album of the year? This was, after all, a category reserved for old blokes failing to rekindle earlier glories: the Chicks’ win broke a sequence comprising Ray Charles, U2, Herbie Hancock and Robert Plant.

Fair enough. A few statuettes and some acclaim in fashionable parts of Brooklyn provide modest compensation for death threats and the rejection of a hitherto loyal red-state fanbase.

Meanwhile, humans continued to tell other humans they never liked whatever they were now not supposed to like. Humans will never stop doing this. Baptists in the American south were doing it when John Lennon declared the Beatles bigger than Jesus. Bearded men in collarless shirts did it when Dylan went electric.

Get the retaliation in first. Hate everything now and you will escape future accusations of hypocrisy.