The best sex scene ever? The puppet copulation in Team America 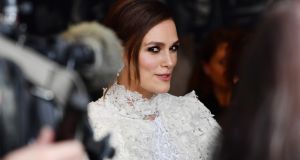 Keira Knightley has been making worthwhile arguments about sex scenes in movies. Speaking on the Chanel Connects podcast, she suggested she might never again shoot such a sequence for a male director. “I don’t have an absolute ban, but I kind of do with men,” she said. “I don’t want it to be those horrible sex scenes where you’re all greased up and everybody is grunting.”

There are two intertwined arguments here. The more serious addresses the potential for film-makers to misuse women on set. “I feel very uncomfortable now trying to portray the male gaze,” Knightley said. The second, more aesthetically inclined strand is to do with the perennial wretchedness of humping sequences in mainstream movies. The clutched sheets. The flickering candles. The screeching saxophones.

No, this is not to suggest sex scenes are “unnecessary” – the favourite adjective of prudes who like to pretend they are not prudes – or that the medium is inherently ill-suited to the carnal. It’s just that too many film-makers having been doing it wrong for too many decades.

Given what we now know – and should have always suspected – about the industry, no sane person will be raising an eyebrow at Knightley’s declaration. For decades, vulnerable actors have been bullied out of comfort zones. The most notorious example was the “butter incident” in Bernardo Bertolucci’s Last Tango in Paris. Much misinformation has bubbled since the film opened in 1972. The rape scene between Maria Schneider and Marlon Brando was entirely “simulated”, but it seems the female star, then just 19, was deliberately kept unaware that butter would be used as a lubricant.

“I wanted her reaction as a girl, not as an actress,” Bertolucci said later. “I wanted her to react humiliated.” That sort of sexist manipulation was taken for granted.

More than 40 years later, Abdellatif Kechiche, director of Blue Is the Warmest Colour, was criticised for his behaviour on the set of that sexually explicit lesbian romance. “We wanted to give everything we have,” Adèle Exarchopoulos, co-star of the film, explained. “But sometimes there was a kind of manipulation, which was hard to handle.” When Léa Seydoux, who played Exarchopoulos’s lover, was asked if she would work with Kechiche again, she replied “never”.

Both actors continued to praise the film itself, but, by December of 2019, the winner of the 2013 Palme d’Or at Cannes had vanished from most critics’ “best of the decade” list.

The arrival of the #MeToo movement in 2017 accelerated that critical shift. In the succeeding years, the role of intimacy co-ordinators – hired to ensure that actors are comfortable in sex scenes – increased on film and TV sets. Ita O’Brien, who performed that task on Normal People, had been making the case for years. “Everything shifted on the dime, and everything that I was calling for then was welcomed,” she said about the #MeToo aftermath.

O’Brien’s work with directors Lenny Abrahamson and Hettie Macdonald on the adaptation of Sally Rooney’s novel helped create sex scenes charged with emotion, awkwardness and excitement. Far from constraining creativity, the new arrangements, by providing discernible limits, free film-makers from moral and creative tensions. They can feel more confident in depicting explicit acts. They no longer need to show fingernails digging suggestively into satin pillow cases. Fewer edits are required of trains powering into tunnels. No longer need anybody close the relevant scene with a montage of gushing oil wells.

You know the type of thing. The saxophones blared. Curtains billowed at the moment of completion. Hair was thrown back towards padded headboards. Even the much-praised sex scene in Nicolas Roeg’s Don’t Look Now is layered with coyness: the pretty flute, the cuts to post-coital grooming. We have never fully escaped from audio-visual euphemism.

The best sex scene ever might be the puppet copulation in Team America: World Police. All the cliches mentioned above – perfected in action cinema of the 1980s and 1990s – are employed as the couple clunk and clack their way towards varnished satisfaction. As a summation of every cinematic evasion about the sexual act it is close to perfect. The more explicit version on the DVD then (ahem) fills in the missing gaps.

We will never entirely escape the coy, cheesy depiction of sexual intercourse referenced in Team America. Repression will be with us forever. But the arrival of intimacy co-ordinators and the work done in increasing awareness by troupers such as Keira Knightley may make the creation of such sequences safer for actors. We can hope.