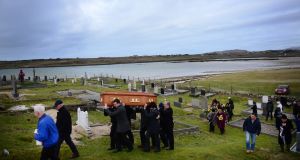 The remains of Pascal Whelan are brought across the sands at low tide to Omey Island. He was the last permanent resident of Omey. Photograph: Bryan O’Brien / The Irish Times

Not many can say their entire future hinged on an aunt’s quick decision to shove them through a window, but James Powell could. The Omey islander was travelling with his relatives by train through Pennsylvania in the US when one train ran into the back of another at Mud Run station in Carbon county.

It was night-time on October 10th, 1888, and many Irish-Americans on board were returning from a Catholic Total Abstinence Union rally. Powell’s aunt Rose was one of 64 people who died when the engine of one train ploughed through the rear carriage of another, and many of the 50 injured were badly maimed.

The full and awful impact of the crash reverberated across the Atlantic to Connemara and to Omey, where emigrants had left a life of poverty exacerbated by famine and collapse of the kelp market. Entire families from that part of the west coast had taken up assisted transatlantic passages initiated in the early 1880s by English Quaker James Hack Tuke.

Mud Run crash survivor James Powell would return to his home island and marry Bridget Coyne, but he and his kith and kin would eventually leave for “better prospects” in Co Meath. His granddaughter, Olive Butler, is one of 12 Omey islanders or relatives of same interviewed by James Morrissey for a new book on the State’s latest offshore island to become depopulated.

In contrast to the evacuations of the Kerry Blaskets, Connemara’s Inishark and Mayo’s Inishkeas, Omey’s equivalent was a relatively quiet affair. Its last surviving permanent resident, stuntman Pascal Whelan, died in February 2017. Morrissey, the Mayo-born communications consultant who has also written about Inishbofin and Inishark, realised this was an opportune moment to commit still fresh memories to print.

The beautifully illustrated result is a timely companion to Prof Diarmaid Ferriter’s encylopaedic new work, On the Edge, which the historian gave a riveting precis of at Westport’s recent Rolling Sun book festival. Unlike the many offshore outcrops which are the subject of Ferriter’s lens – a lens which captures everything about a State’s indifference to its most vulnerable regions – Omey is a “part-time” island. Like Normandy’s Mont-Saint-Michel or Cornwall’s St Mary’s Mount, it is defined by tide.

If Féchin was the first, he wouldn’t be the last proselytiser. During the mid 19th century famine years, the Protestant Irish Church Mission was very active in Connemara, and nowhere more so than on Omey.

However, inter-faith tensions erupted in 1879, with a violent encounter between Omey’s Catholic priest Fr William Rhatigan, and Protestant minister Rev William Lindsay MacNeice, grandfather of poet Louis MacNeice. The island’s schoolhouses, and others on the mainland, were attacked in the fray which required 100 policemen from Clifden to quell.

Such stories of resilience and self-sufficiency pepper the accounts of neighbours who recall living off salted fish caught in nets and carrageen collected on the shore, and rabbits trapped by “lamping” at night.

Mc Loughlin remembers how you’d “know your neighbours’ wellingtons” and the shape of their footprints in the sand, and how certain rocks earned nicknames as handy stage markers for the approaching tide.

No record of Omey would be complete without reference to the late poet Richard Murphy, with his hexagon granite studio and artist Gerard Dillon. Islander Feichin Mulkerrin, who is also Office of Public Works warden, revived the Omey race festival in 2001 after a lapse of 39 years , and both he and Maggie Coohill have kept track of the island’s archaeology, with some recent discoveries exposed by winter storms.

Coohill reflects the upset of former residents who believe that bones removed by archaeologists for examination should be returned. “After all, these are probably our relations,”she says. Omey by James Morrissey, is published by Crannog Books 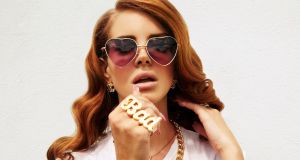