Creed II: Little else this season has been so entertaining

Review: The Rocky films have moved on, and the acting has never been better in the series

Sylvester Stallone, star of the Rocky movies, hails the return of the Creed-Drago story from Rocky IV in Creed II. Creed II is released in Irish cinemas on on November 30th. Video: Warner Bros. 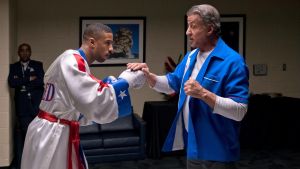 Corey Calliet and Sylvester Stallone, who spills with the sort of ancient wisdom you get only from grizzled trainers in boxing movies

If you were delivering a lecture on how to extract the most value from a worn formula then you could do worse than direct your audience to the latest film in the Rocky cycle.

Creed II doesn’t have quite the impact of its immediate predecessor – young Steven Caple Jr takes over as director from the only slightly less young Ryan Coogler – but it plays its old tunes with such indecent vigour that only the meanest will complain. Little else this season has been so entertaining.

Nobody would deny that clunky tropes abound. There are, for example, more conversations with headstones in the Rocky series than in all the rest of popular art combined. Still taking the agreeably lop-sided form of Sylvester Stallone, Rocky Balboa has more than a few of those with the one that sits over his late wife Adrian.

Back as the lithe, charismatic Michael B Jordan, Adonis “Donnie” Creed chews the imagined ear off the stone atop his dead dad Apollo. The subject of these one-sided conversations has much to do with the imminent threat of Viktor Drago (Florian Munteanu).

You’ll know that surname. A depressing 33 years ago, in Rocky IV, Ivan Drago (Dolph Lundgren), Viktor’s dad, beat Apollo to death. Rocky later took revenge in the ring, but he still regrets allowing Apollo to take the earlier fight against the Russian behemoth.

It hardly needs to be explained why Donnie is inclined to accept Viktor’s challenge. Will Rocky overcome his concerns and help the younger man train for the title bout? Not at first. Maybe later. Some story beats are immovable, but others are up for negotiation.

Viewers of a certain age will gorge on the icons of 1980s pop culture lowered into the action. There’s Sly himself, of course (a creation of the 1970s who, like his old mate Schwarzenegger, came into his own during the more grabby decade).

Once a bumbling, accidental truth teller, Rocky now spills over with the sort of ancient wisdom you get only from grizzled trainers in boxing movies. Lundgren is monumental as the older Drago. The distinguished Phylicia Rashad, former Mrs Cosby, dispenses wisdom as Donnie’s mum.

About Brigitte Nielsen’s brief, imperial turn as Ludmilla Drago (that name!) we will say nothing bar a suggestion that few have done so much with so little since Michael Caine’s men defended Rorke’s Drift in Zulu. She is magnificent.

The series’ attitude to our Russian friends has altered without becoming noticeably more nuanced. In Rocky IV they were steroid-pumped slaves of a monumental Soviet dictatorship. Now they either lurk miserably in brutalist tower blocks or swill from goblets in fantastically vulgar post-Romanoff mansions.

But the tone of the films has moved on. All this delightfully ripe material is accommodated within a project that cares for characterisation and knows how to build sympathy for even the less loveable personalities. There is now a genuine poignancy to Ivan’s quest.

The consistently excellent Tessa Thompson (among this year’s most unavoidable actors) manages to make something layered of a role that, in less skilled hands, could have become a generic “wag”.

Indeed, the acting has never been better in the Rocky series. “It feels like Shakespeare,” a sports anchor says when the younger Creed and the younger Drago get back in the ring together.

That may be stretching it. But there’s enough texture to make the passage towards the inevitable return of Bill Conti’s fanfare pass with welcome rapidity. That theme arrives as a deserved thank-you to all involved for doing a better job than they needed to do.

If you don’t leave punching the air you may wish to throw in the towel (or whatever other boxing metaphor suits).