Lillie’s Bordello closes: ‘I've nowhere to go now... This is my sanctuary’

‘End of an era’ and ‘Where will we go now?’ were the common refrains at the last night of Lillie’s Bordello 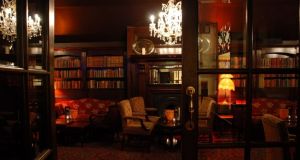 Modelled after a Victorian brothel, Lillie’s Bordello quickly established itself as a celebrity stomping ground and later became synonymous with excesses of the Celtic Tiger.

‘End of an era’ and ‘Where will we go now?’ were the common refrains as partyogers of a certain vintage flocked to Lillie’s Bordello for one final dance on Saturday night.

In November, it was announced the late night haunt would close after more than 26 years in business. Modelled after a Victorian brothel, Lillie’s Bordello quickly established itself as a celebrity stomping ground and later became synonymous with the excesses of the Celtic Tiger. Michael Flatley once declared it to be ‘one of the greatest nightclubs in the world’.

Saturday night was billed as ‘the last hurrah’ with regulars encouraged to ‘bring your keys and your memories’. They kindly obliged with people travelling from far and wide to pay their respects and bid farewell. Outside on Grafton Street, one woman could be overheard telling the doorman, “My brother came all the way from Australia for this!”

Walking up Adam Court, there was a sense of giddy nostalgia in the air. One customer remarked that the wristbands might one day become collectibles. “Sell them on eBay! ” joked the security guard.

Inside the crimson-hued venue, customers sipped on complimentary bellinis and exchanged hugs and kisses with club scene contemporaries they hadn’t seen in years.

Groups clamoured to get their picture taken in front of a novelty photo booth. Others queued up to take part in a raffle of Lillie’s Bordello memorabilia. (A tasteful nude portrait for your sitting room, anyone?) Meanwhile, the chosen few flashed their white wristbands and slinked in and out of the frightfully exclusive and oft-mythologised Library Room all night.

As people threw shapes on the dancefloor to the strains of M People and Jamiroquai, regular Niamh Quinn lamented the club’s closure and said she would miss the music most of all.

“When I was going out regularly in the nineties, it was the rave scene and Tommy Stewart played in System,” said Quinn, referring to the former nightclub on South Anne Street. “When I found out he was the resident DJ here, I started coming back for the music. The music was what it was all about. Uplifting, old-school music.”

Asked where she would go now for a dance she joked, “’Maybe I’ll just have to realise I’m getting too old.”

In the ladies’ bathroom, toilet attendant Eithne Kellett was busy posing for selfies with two young women. Having dispensed beauty treats there for over 20 years, she acknowledged being something of an institution herself.

“They call me The Lady of Lillie’s and Mammy,” she laughed. “I’m Mammy to them all. Isn’t that right, girls?”

Last night, she was greeted by a host of familiar faces.

“People that were here years and years ago are all coming back and it’s lovely to see them,” she remarked. “A lot of them are going to miss it. Lillie’s was the place they all came to.”

Asked what she would miss most about the club, Kellett replied, “The girls coming in to see me here.”

“Where are you going after Lillie’s?” asked one of the young women.

“I’m going to rest,” replied Kellett. “Stay at home and put my feet up on a Saturday night.”

Outside in the smoking area, meanwhile, Lillie’s devotees reflected on heady nights and star sightings. “A mate of mine saw Dwight Yorke in here once,” slurred one gentleman. Another guest regaled me with tales of sneaking into the VIP area via the fire exit in The Porterhouse on Nassau Street.

For many, however, the occasion was bittersweet.

“Every good thing has to come to an end. At the same time it’s very sad that this has to end. I’ve never felt more at home and more looked after and like I was one of the people. Lillie’s was always a members’ club. I never paid for a membership but I felt like a member. I was treated like a member.”

He commended the club and its staff for their hospitality, singling out the likes of Jean Crowley and Eibhlin Hewitt as “pillars of what this place is”.

“It’s going to be a massive loss for me. I have nowhere to go in town anymore. This is my sanctuary.”

“I know it might reopen as something else, but it won’t be Lillie’s. It won’t be my home.”

Love/Hate is returning to RTÉ on Friday nights. Why did we love it so much?
4

Normal People: Full-frontal nudity was not its most radical feature
8