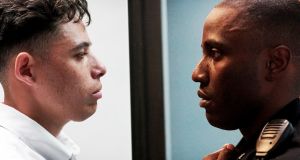 Nicholas (Chalamet) has been missing for a few days before he turns up, clearly at the tail end of a drug binge and unable to talk to his worried father, David (Carell). It’s the start of a predictable, maddening pattern and downward spiral. Upon each return, Nicholas looks further gone than before, until finally, he’s stealing from his own family to pay for his crystal meth habit. The dual protagonist structure allows for two tremendous performances that hang off nothing in particular. The film ends so abruptly, there’s nothing Van Groeningen – the brilliant Belgian director who reinvented the weepie with The Broken Circle Breakdown (2012) – can do to convince the viewer that this is a movie. Full review TB

Perfectly adequate retelling of Queen Mary’s unhappy demise, featuring a determined Ronan as the Scotswoman and a wracked Robbie as her rival Elizabeth I. It’s a pretty unimaginative affair with too many baffling diversions from the facts. (Why does Mary, raised in France, speak with a Glaswegian accent?) Still, the pleasures of a classy production with classy performers are not to be wholly dismissed. It’s the best Sunday-night telly at the cinema this Friday. Full review/trailer DC

Sidonie-Gabrielle Colette (Knightley) is a pigtailed teenager living in a corner of Burgundy who is not adverse to a roll in the hay with her parents’ slick and much older friend Willy (Henry Gauthier-Villars, played by West). It’s only after the naive country girl has married and moved to Paris with Willy that she and we come to realise that he’s a literary fraud. A womaniser, a bully, and gambler, Willy is reluctant to let the brink of poverty come between him and whoring, so he tells Colette to write a novel. She writes a bucolic tale recalling her rural childhood. He trashes it and demands a rewrite with a closer focus on the schoolgirls. The second draft is an overnight sensation, published under Gauthier-Villars’s name. It takes a while for Colette to emerge from his shadow, but she does so with gusto in this good looking cradle-to-grave biopic. Full review/trailer TB

Composed of long, snaking takes and Altmanesque overlapping dialogue and soundtracks, The Front Runner parachutes the viewer into the cut and thrust of the 1984 race for the Democratic presidential nomination, just as Colorado senator Gary Hart is conceding to Walter Mondale. Hart has so much charisma, smarts and fabulous hair that they’ve had to draught in the Greatest Showman himself to play the role. Fast forward to 1987: Hart is the presumed front-runner in the Democratic race until he is caught entertaining a pretty blonde named Donna Rice (Paxton), whom he met on a yacht named Monkey Business. The historical details are impeccable but the events have been pointedly repurposed as a cautionary tale that leads all the way to Trump. Full review TB

Touching, funny drama following Stan Laurel and Oliver Hardy (Coogan and Reilly) as they tour the UK and Ireland in declining years. That’s pretty much it. There are few significant revelations. The comedy is as gentle as the original films. The sentimental turns are worked ruthlessly. Nothing much happens that you don’t expect to happen. Yet it works like a dream. The two lead roles could hardly be better cast and Arianda steal every scene as Laurel’s bolshie Russian wife. Full review/trailer DC

Other ★★★★☆ and ★★★★★ movies out and about: Bohemian Rhapsody, Bumblebee, The Camino Voyage, Creed II, The Favourite Free Solo, RBG, Shoplifters, Spider-Man: Into the Spider-verse, A Star Is Born, Three Identical Strangers

Netflix: The best 101 films to watch right now
5 Welcome to the child sex capital of Europe
6

‘The Art of War’: As relevant now as when it was written
7

Ingenious Ireland: A cornucopia of a book that should be savoured slowly
Real news has value SUBSCRIBE