North’s Assembly elections should be postponed by a year, Julian Smith says 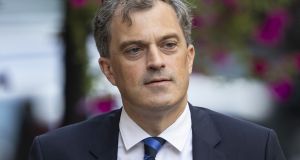 The term of the North’s current Executive and Assembly should be prolonged by a year to give the institutions a better chance to succeed, former secretary of state for Northern Ireland Julian Smith has proposed.

Mr Smith told the House of Commons Northern Ireland Affairs Committee on Thursday that the mandate of this Assembly should be extended by 12 months so that the next Assembly elections would happen in May 2023 rather than May 2022.

Mr Smith, who in January with Tánaiste Simon Coveney published the New Decade, New Approach agreement that restored powersharing in the North, but in February was sacked as secretary of state for Northern Ireland by British prime minister Boris Johnson, received high praise from the committee members.

Some of the strongest commendations came from Tory MPs.

DUP North Antrim MP Ian Paisley told him he would “go down in history” as the politician “prepared to go the extra mile” for a deal in the North and that people in Northern Ireland were grateful for his “leadership and courage”.

This was echoed by SDLP, Alliance, Conservative and Labour members of the committee, with Conservative member and MP Robert Goodwill describing him as the “most successful” northern secretary since Labour MP Mo Mowlam, who was involved in striking the 1998 Belfast Agreement.

Mr Goodwill then asked him why Mr Johnson had “relinquished” him of his duties, which Mr Smith described as a “curveball” question.

Mr Smith said that Mr Johnson had given him an opportunity to do the job and help achieve the deal, for which he was “extremely grateful”. It was an “incredible honour” to have had the role, he added, while saying the British prime minister had the right to choose his cabinet.

“I am ready to help both the government and the people of Northern Ireland in any way I can, to support this beautiful part of the United Kingdom, ” he said.

On his sacking, Mr Smith told the committee there “were no hard feelings, no bad feelings”.

“If the history books don’t record your role in securing the resurrection of Stormont as fulsomely as they should, and I believe that they will, then this committee is hugely grateful to you,” he added.

Mr Smith said one of the reasons the deal was achieved was because during the Westminster general election in December the electorate on the doorstep told politicians to restore Stormont.

When he and Mr Coveney published New Decade, New Approach, the politicians had not definitively accepted the agreement, although they subsequently did.

Mr Smith admitted to SDLP MP Claire Hanna that there was an element of bouncing the parties into a deal. “Essentially because the main parties were struggling to trust one another . . . I and Simon Coveney and my officials were essentially involved in a bounce – in trying to bounce people in[to] agreeing,” he said.

Mr Smith said the Irish Government played a “pivotal role” in achieving the deal, while acknowledging that as regards Brexit there had been “turbulence” and some “frayed” relationships between Britain and Ireland.

Addressing more general political issues, Mr Smith proposed that the next Assembly elections should be postponed by a year to May 2023 to give politicians more time to deal with regular matters other than coronavirus.

“I think that as a result of Covid many things that would have happened in the Executive in the weeks following the restoration have obviously been delayed,” he said. “I think giving this Executive and Assembly time would help.”

Mr Smith, who after the deal was done was criticised for not providing more finance to the Executive, also spoke about the Executive raising its own revenue. He suggested that money could be accrued through water charges – an issue that Northern Ireland parties have obdurately resisted.

In terms of British government funding, he said politicians in the North must be mindful that London also had to be fair to England, Scotland and Wales.

He believed that if “there is reform happening” in relation to raising revenue then this would be reciprocated by the British government.

Mr Smith’s successor Brandon Lewis has been accused of breaching the Stormont House Agreement proposals for addressing the past. Mr Smith told Alliance MP Stephen Farry that politicians had a duty to deliver for victims and survivors but that it was up to Mr Lewis and others to take the issue forward.

On Westminster passing legislation that liberalised abortion law in Northern Ireland while the North’s institutions were suspended, Mr Paisley said to Mr Smith that on such a controversial issue it should now be left to the Assembly to “have the space to deliver what the people in this region of the United Kingdom want”.

Mr Smith said his understanding was that the legal situation was that the Westminster decision on abortion now was the law and that the implementation of the regulations was the “responsibility of the Executive”.