Laurie Anderson: On My Culture Radar 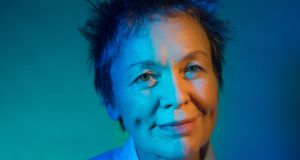 Laurie Anderson: ‘Tom Hanks is in the forefront of my mind, as he caught coronavirus in Australia. I like him a lot’

Current favourite book
I dip in and out of Sapiens by Yuval Noah Harari like everyone else, and I’m just finishing a weird one called Rebel in the Soul and His Destiny by Bika Reed. It’s an argument between a man and his soul – I love text presented as dialogues and argument.

I’m also reading Solid Ground: Buddhist Wisdom for Difficult Times by Sylvia Boorst, which is text from three different points of view. I read it because I wake up every morning with a feeling of dread and despair, and I can’t believe I’m in this world, where one billion Australian animals just burned and there’s a pandemic sweeping the world. So I open the book and it tells me about the basic Buddhist tenet that everything changes. Every person you know, every idea you’ve had, every house you’ve moved in, all will disappear. It’s sobering to read first thing in the morning. The feeling of utter loss turns into a feeling of appreciation, and it reminds me to stop trying to hold on to things.

Comedian
I haven’t seen anyone that’s as dangerous as Andy Kaufman in a long time. The first time I saw him was playing the bongos in a club and sobbing, and I thought, Who is this guy? It was so confrontational and weird. I became his sidekick. Like, he’d say, “I can’t stand women, I won’t respect them until one comes and wrestles me down”, and that was my cue to go on stage and wrestle him down. I judge other comedians by whether they’re as weird as Andy.

Theatre show
I’ve just come out of Yabarra as part of the Adelaide Fringe Festival, and there were some interesting things in the show. It was a projection walk-through show of Aboriginal creation, so it was like being inside a virtual reality zone. I think these walk-through, immersive things are going to be the future of theatre, but I don’t think anyone has quite cracked the code.

Artist
Anselm Kiefer is my favourite painter by far. I love his work. It’s mythic and crazy and grand. I always find myself gravitating to his work – sometimes I don’t know that it’s his work, but I see it and it pulls me over into a zone. It’s because of its scope, its history, its sense of desolation. The beautiful colours, its daringness. His work is 21st-century landscape painting of epic proportion.

City
It has to be New York. My friends there have been calling me, crying. Our president has closed down the borders and people are feeling they’re in prison, because they can’t get out. It’s a disaster. We look at Italy with extreme trepidation. The pattern of the virus is so intense. It went from 14 people to 10,000 in two weeks there. Everything has shut down in New York, everything’s cancelled, no one’s out on the street. You can imagine that’s preoccupying my mind.

Actor
Tom Hanks is in the forefront of my mind, as he caught coronavirus in Australia. I like him a lot. He did an excellent job in A Beautiful Day in the Neighborhood. Really lovely. He painted a gentle picture of a gentle person.

TV show
I used to like Doc Martin a lot. It was set out in Cornwall, and I like the premise of a Type A surgeon who suddenly has a fear of blood. The characters that live in the town are hilarious

Film
One of my all-time favourites is Miracle in Milan by Vittorio De Sica. It’s a classic Italian film with wonderful characters. It’s a very political film, but tender and sweet.

Laurie Anderson’s appearance at the National Concert Hall, Dublin, has been cancelled