Set in Galway Airport, the audience is led to an understanding of how Gaeilge evolved 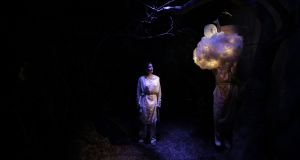 Bilingual children’s theatre company Branar Téatar do Phaistí is known for an imaginative intermingling of the theatre arts. From adaptations of existing narratives (How to Catch a Star and The Night Before Christmas) to original material (Wooly’s Quest and Maloney’s Dream), they use a blend of puppetry and music, projection and live performance, to animate stage worlds for young audiences. Sruth na Teanga features all these elements and more, creating an immersive theatre event with a grand ambition: to bring to physical life the evolution of the Irish language.

An audience of 20 gathers in a holding area of the decommissioned Galway Airport for the experience, which is staged as a journey through history. Passing through an unremarkable door, we travel down a narrowing blue-lit corridor, like a gang of Alices tumbling down a rabbit hole. The passageway opens into a magical forest where two storytellers (Catherine Dinning and Tara Breathnach) introduce us to a world of Irish myth and legend, connecting language and lore through the first stories carved into Ogham stones. Our guides deposit us in a quickly-sealed room that is framed on all sides by screens across which an animation unfurls, charting the Viking and Norman invasions of Ireland and the subsequent linguistic evolution.

The theatrical journey, however, could do with a framing narrative to help guide the audience through the performance

A secret door opens into a world in miniature, where the effects of the Famine and emigration are played out by Grace Kiely and Ionia Ní Chróinín, before we are led to a well-stocked archive, where Helen Gregg and Zita Monahan-McGowan encourage us to explore physical artifacts from the teanga’s 20th-century development.

Director Marc Mac Lochlainn has gathered together an incredible creative team to execute his vision. Maeve Clancy’s immersive design is breathtaking in detail, while the art department’s execution is faultless. The scale model of a Famine ship and the haunted figures boarding is just one image that the audience will carry with them long after the experience has finished.

The theatrical journey, however, could do with a framing narrative to help guide the audience through the performance. Most of it (fittingly) is performed as Gaeilge, but for those without fluency and for younger audience members the symbolic translation lacks clarity. That said, there are some wonderful concrete moments where gesture transcends language, in particular when the audience is charged with minding an Ogham stone, whose message they decode in the final room, before being discharged into the real world with a geall to preserve it.