Kevin Barry: On My Culture Radar

The award-winning author and playwright on Tommy Tiernan, Austin Texas, and why we need podcasts 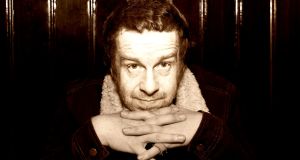 Kevin Barry: “I have a worry that the much-vaunted golden age of television is now over.”

I was a judge for the Goldsmiths Prize last year, and H(a)ppy by Nicola Barker was ultimately the winner. It’s odd and out there, but it’s beautiful. It’s a kind of dystopian book, which does mad things with typography and talks about Paraguay and guitar music – it goes off in some strange directions. She’s one of the most interesting novelists working, her books can be difficult and dense, but they’re always fun to read as well.

There’s a pub with good food in Sligo called The Draft House. It’s a nice place to go because you’d be walking on the beach in Strandhill and you can go in and pig out on conceivably the most wonderful fish and chips on the planet. It’s a cool place. There’s also the Sweet Beat Café in Sligo town. It does vegan food, so if I’m being good I go there. Sometimes I go vegan for four days of the week, but then I’ll eat a pig on the Saturday.

Tommy Tiernan, not least because he’s acting in a film adaptation of Dark Lies the Island, which is coming out in the second half of the year. He’s really brilliant in it, he’s a really good actor, but I’ve been a fan of his comedy for years because he’s properly wild. As a comedian, the material feeds up from subconscious places, and he lets it whip out at 90 miles per hour. He’s hysterically funny as well. I’m always amazed to see what he can do with his bizarre mind.

There’s a stickmaker called Seanie Barron who’s based in Askeaton, Co Limerick. He makes walking sticks that are so beautiful he has claim to be a visual artist; there have been exhibitions and so forth, although he wouldn’t have considered himself an artist. He finds these sticks in the wild, carves them, and puts handles on them. It’s incredible work. I’ve met him a bit, and he’s great fun. He has a story for every stick: where he found the wood and what it reminds him of. It’s stickmaking, but it’s also storytelling.

I was lucky enough to spend a large part of January and February in Austin, Texas. I absolutely adored it. It’s not Texan, it’s a laidback, cool city with lots of amazing food trucks and too many hipsters. The most Austin thing I saw while I was there was a young man walking his goat on a leash down to the local indie coffee shop. It feels like an independent republic within a large, conservative state. It’s got desert weather, so people were swimming outside in January. That was great to warm the bones after Co Sligo.

Last week, I belatedly saw the Druid Theatre production of Waiting for Godot at the Hawk’s Well Theatre in Sligo. When something gets five-star reviews I’m convinced it’s not going to work, but it deserved the acclaim. It brought out all the great comedy in Beckett, I hate it when Beckett is played sombre and morbid. Very often he has his tongue in his cheek, and the misery is a schtick. This production also looked beautiful, and the actors were really good, especially Aaron Monaghan.

I recently watched The Deuce, the show from The Wire creator David Simon. It’s essentially about prostitution in New York in the 1970s. It’s very well done, and reminded me a bit of The Wire but it didn’t quite have its focus. I’d recommend it with the reservation that it hasn’t really found its way yet.

I have a worry that the much-vaunted golden age of television is now over. There’s been nothing in the last couple of years on a par with the very best shows like Mad Men, The Sopranos, The Wire and Breaking Bad. Especially in American television, it’s become a little formulaic. The scripts just seem to be going towards the middle ground again. I saw a couple of episodes of The Handmaid’s Tale, and it was brilliantly shot with good acting, but the scripts were really cheesy in places and trying to make points too obviously.

We all spend so much time online, our brains are like tormented little frogs and they hop around at 100 miles per hour. We need to slow them down sometimes, and one of the things that can slow us down is the human voice. We still like to be told stories, which is why podcasts have become such a phenomenon. I should mention The Blindboy Podcast, not least because I’ve been on it with him. We had an absolute ball, he has a brilliant head on him, and he’s a really good writer as well.