Is morality just a matter of following your deepest desires?

Unthinkable: Most of us have a longing to ‘do the right thing’, says Lizzy Ventham 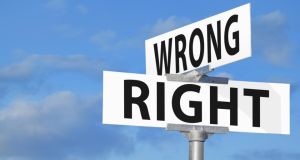 ‘Nearly all of us have some desire to do what’s right but a lot of the time our desire doesn’t really translate into motivation.’ Photograph: Getty images

Being moral is commonly associated with a kind of joyless rule-keeping. Blame Christianity if you like – and particularly that strand which sees salvation in self-denial – although secular philosophy has hardly helped either.

Immanuel Kant (1724 to 1804), probably the most influential moral philosopher of modern European history, portrayed desire as something to resist with “the moral law”. In his hands, individual sentiment became next to irrelevant. Personal feelings were to be swept aside in the interests of stoic duty.

But what if morality stood, not in opposition to desire but, squarely behind it? What if being moral was, in fact, a process of paying heed to one’s deepest, most authentic wishes?

Lizzy Ventham is exploring this intriguing question in her research as a philosopher and teaching fellow at Trinity College Dublin.

Traditional conceptions of morality overlook the role of “moral desires”, she believes. While it is difficult to immediately distinguish between ordinary desire and moral desire, she says, “broadly speaking our moral desires will be our desires to do the right thing, for the right reasons”.

If morality can be understood as kind of desire, it upturns conventional thinking on good and bad behaviour. Ventham notes: “One of the things moral philosophers worry about is the question: why should we be good? I think if we really try to understand our desires properly then that’s how we find the answer.”

Lizzy Ventham replies: “It seems like most people, by the time they’ve reached a certain age at least, want to do the right thing. At least, to some extent. Whatever the cause, we tend to have a strong and persistent kind of sympathy – as Hume might put it – towards our fellow living beings.

“When we see pain and suffering in others we want to do something to help, and when we feel happiness we want to bring that about in others. Even when we find ourselves giving in to a temptation to do something we see as bad, we usually have a twinge of guilt that we need to dismiss – because to some extent, a small part of us wanted not to do it.”

Given we have these moral desires, to what extent can we rely on them to guide us? Can you construct a moral theory based purely on desire?

“Even if we do all have moral desires, that doesn’t mean we’re all good people in practice.

“Philippa Foot uses this analogy about a person who is lying in bed in the morning. All this person can think about at the moment is how comfortable and warm their bed is, and how much they want to go back to sleep. But just because their desire to stay in bed is at the forefront of their mind, that doesn’t mean that they don’t still have a whole range of desires in the background.

“That person still wants a good life, still has projects to complete, things they want to do, even when the thought of doing so ‘leaves them cold’ at that particular moment. The same goes for our moral desires a lot of the time.

“Nearly all of us have some desire to do what’s right, whatever that turns out to be, but a lot of the time our desire doesn’t really translate into motivation, into moving us to actually do what’s right.”

Most philosophers talk about moral rules rather than moral desires. Are they mistaken, do you think? Do we need to reign in the influence of Kant?

“Kant thinks that morality should be seen as something completely apart from what we desire, because moral obligations are universal. They should apply to everyone, regardless of whether or not they want to be good people. I disagree, and I think this is partly because Kant has a different idea of what desires are like.

“But having a desire-based view of morality doesn’t necessarily mean we need to give up on there being objective moral rules. It might be that there’s an objective moral law, and that the best way to fulfil our moral desires would be to follow that law.”

Can we say with any certainty what the relationship is between moral desires and the moral law?

“I think it’s likely that there’s an objective moral truth, and that as a society we’re gradually making progress in figuring out what that truth looks like.

“Most of us want to do what’s right, whatever that turns out to be. We just need to do our best to work out the details of what’s really right, and then at the same time we’ll have figured out how to fulfil our desires to be good people.”

Question: Is goodness in one’s genes?

Mary Midgley replies: “Fatalist stories have always been quite popular. People like the frisson, the frightening thought that nothing they do is their fault because it’s all the fault of some curious force.”

Contempo Quartet at 25: ‘I’d would like to think we are a little wiser’
9