Philip Pettit: The republican image of freedom offers a moral compass for our country

In order to enjoy democratic freedom, the people of a republic should share equally in imposing community standards on government 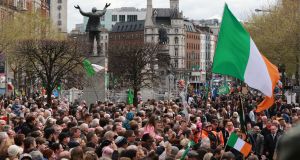 The 1916 Proclamation of the Irish Republic, Poblacht na hÉireann, reinforces a rich and inspiring connection with the long tradition of European republicanism.

Democratic freedom is asserted as “the right of the people of Ireland” to the “unfettered control of Irish destinies”, where this is to be exercised under a ‘National Government, representative of the whole people’. Personal freedom is assured in the guarantee of ‘equal rights and equal opportunities to all its citizens’ by a regime that is committed to pursuing ‘the happiness and prosperity of the whole nation’. And ‘national freedom’ is proclaimed as the right of that nation to establish ‘the Irish Republic as a Sovereign Independent State’.

These commitments to democratic, personal and national freedom define a manifesto that can move and guide us even today. They argue for a neo-republican conception of where we should be going as a political community.

The idea of the republic was ignited in the Roman republic, kindled in the independent cities of Renaissance Italy, and came to full flame in the English and Dutch revolutions of the 17th century, and in the American and French revolutions of the 18th. It was this republicanism that Wolfe Tone introduced to Ireland in the 1780s and 1790s, building it into the DNA of our national politics.

The republican idea of freedom was well summed up by Tone when he wrote that true republicans ‘detest ever the name of master’. The word for master in Latin was dominus and for close to 2,000 years the republican notion of freedom was taken to require not having to live under the power of a private or public dominus, even one of proven goodwill. It meant living instead on your own terms, protected equally with others under a regime of law that you share equally in controlling.

Linking freedom with the ideal of un-dominated status, the republican way of thinking argues for an appealing interpretation of democratic, personal and national freedom. The eyeball test supports demanding lessons in each of these three domains.

In order to enjoy democratic freedom, the people of a republic should share equally in imposing community standards on government, keeping those in power honest, open, fair-minded and responsive; otherwise government is not a res publica, a public affair. And if they are to achieve this discipline over government, the people must not only have effective electoral powers; they must also enjoy the contestatory powers long emphasised in republican tradition.

Contestatory powers require a fearless spirit of opposition in a people willing, individually and in civic organisations, to challenge the powerful in the courts and tribunals, before commissions and inquiries, in the media, and on the streets. John Philpott Curran, an Irish contemporary of Tone’s, memorably underlined the importance of contestation when he said that the condition for the enjoyment of freedom is “eternal vigilance” and that “evil prospers when good men do nothing”.

The idea that being free means enjoying an un-dominated status is relevant, not just in the democratic relation between citizenry and government, but also in the personal relations of citizens with one another.

Consider those who fear for their welfare in face of bully or criminal, depend on the handouts of others for living a decent life, keep their heads down for fear of police harassment, maintain employment only at the cost of keeping the manager sweet, or rely on meekness and ingratiation for avoiding domestic abuse. People in these straits cannot look others in the eye without reason for fear or deference, and enjoy a severely diminished freedom.

Understood in the republican manner, personal freedom requires social, legal and medical security for all, equal access to education and training, safety in the home as well as the public square, and an assurance of standing and dignity in the workplace. While law must provide the basic infrastructure needed, social organisations are crucial to maintaining this freedom. As we need NGOs to invigilate and interrogate government, so we need unions to protect workers, community organisations to support women at risk, and watchdog bodies to monitor and ensure the quality of public services.

In the international realm, to turn to the third topic, republican thought supports the idea that as each country should enjoy democratic freedom internally, it should enjoy national freedom in its external relations. It should be proof against domination by other countries, by international agencies, and by multinational corporations. It should be able to stand tall – again the eyeball test has obvious relevance – in relating to such bodies, even as it works with them for achieving global goods and for insuring against global evils.

The forces of global finance and euro-zone austerity have severely dented Ireland’s national freedom over the past decade. They have required taxpayers to bail out the bondholders of private banks, imposed a budgetary regime that we would never have contemplated outside the euro zone, and driven the country to rely on soliciting multinational corporations with sweetheart taxation arrangements. But here, as on other fronts, our failures to secure republican freedom should not cause us to despair, only to resolve that however long it takes, we will work to make things better.

As this indicates, the republican image of freedom offers a moral compass for identifying what we should expect our country to do for us – and for the world – and what we as a citizenry should do for our country. In providing such a challenging perspective, it stands in stark contrast to the impoverished, neo-liberal ideal that is so widely touted today.

In the neo-liberal vision people are free insofar as they can all compete on the market in exchanging goods and services and labour. And so the role of democratic law, essentially secondary in character, is to regulate this competition, guarding against only the worst abuses and the harshest side-effects of a commercial free-for-all.

We must see things very differently if we embrace the neo-republican perspective. It is we who establish the rights of property, the role of corporations, and the range of the markets. Our duty as a citizenry is to put this economy to work, as we should put all our institutions to work, in the service of democratic, personal and national freedom.

Philip Pettit, who teaches philosophy and political theory at Princeton University, is a native of Ballygar, Co Galway. He is the author of ‘Just Freedom’ (Norton 2014).

Philip Pettit will be speaking on these themes at Ballygar Court House on Saturday, May 21st, Nenagh Arts Centre on Sunday, May 22nd, in Maynooth University on Monday, May 23rd, and at the Wheel’s annual lecture at Croke Park Conference Centre, Dublin on Tuesday, May 24th.