‘I have a plan. But first I must make it to the rebels’

Fighting Words 2020: The Inside Job, a story set during the 1916 Rising, by Ruairí Lynch 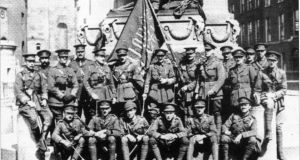 The smooth cobbles of Temple Bar catch the rain that falls lightly from the heavens in their numerous divots and crevices. The sky is as slate grey and cloud stricken as ever, reflecting the temperament in Dublin perfectly; sombre, resigned and utterly melancholic. Pools of water are quickly forming in my boots, as I continue my monotonous task of marching, up and down, right foot before left, along the now dilapidated and ruinous street. The persistent drizzle, coupled with the nefarious fighting that took place earlier today, has dishevelled the once proud Union Jack that rests on my sleeve. Now little more than a tangled mess of thread, it is a mocking analogy of my situation; here I stand, in the employ of a nation I have no adoration for, sent to fight against a cause I have no quarrel with. Is a steady pay cheque, really worth casting myself out as the social pariah I am fast becoming? Is it worth destroying my home, and my fellow countrymen, on the orders of a foreign army, on foreign soil?

My train of thought is interrupted by the booming voice of my commanding officer, Col Tanner, a pipe-smoking, ominous man, that is commonly perceived among his men to be more dangerous than any enemy we should ever fight. His fits of fiery temper, and vicious punishments for any supposed misconduct, have come to define him as the power-hungry old man we all depict him as. “All right men,” he bellows, his imposing voice reverberating around the street, “those Fenian swine have fallen back once again, it’s our job to deal the final blow.”

“We must begin to make our way immediately, ready yourselves.”

Just as quickly as he arrived he is gone, back to the safety of his armoured car, miles behind enemy lines, while we are about to attempt to breach said enemy lines, across the Liffey, surrounding the rebel-held General Post Office. I somehow don’t think I’ll still be a soldier in his majesty’s army by the time the inevitable skirmish begins. I have a plan. But first I must make it to the rebels.

The smooth synchronicity of the British army is a frightful thing to behold. I can hear the relentless heckling and threats from the citizens of Dublin, wiping out any last reservations I have about what I plan to do. Outwardly I may appear to be just any other soldier, but on the inside I am continuing to plan my escape from the army. It occurs to me that I should probably utilise my position to the rebels advantage . But first, I must break off from the army.

We continue to march, in the same mechanic pattern, towards the GPO, our boots colliding against the pavement with a fierce smack. The rain has begun to beat down in torrents, obscuring my view ahead. This, I think, could be used to my advantage. My opportunity comes not long after we set out. I have managed to position myself on the flank of the marching soldiers, making my task of detaching myself from the army all the easier. Make our way through the crammed streets leading up to the GPO, when I spot an alley, only a few steps ahead, to my right. With all the speed I can muster, I break off from the group, shouts of, first, alarm, then abuse, following me as I sprint down the side street. It takes me only a moment to realise that there are soldiers in hot pursuit, the cracks of their rifle fire encourage me onwards. I dive behind a heap of rubble, the hard pavement causing me to wince in pain, but my plan has worked. With every second that passes the cries of my pursuers grow ever fainter. However, my job is not done.

I wait a full 10 minutes before I finally rise and begin to make my way to the GPO. Luckily all traces of imperial soldiers are long gone by the time I exit the alley.

The first thing I notice when I finally reach the post office, is that the British flag no longer flies above its great doors. Instead a proud Irish Tricolour hangs limply in the torrential rain. Despite my vision of mass barricades and legions of soldiers, the building is largely unguarded and except for a few sandbags outside the main entrance its exterior is entirely isolated. It is a different story on the inside however. The ground floor is in utter pandemonium. Wounded soldiers lie groaning on stretchers, while cohorts of nurses rush to aid them. The general chaos makes it easy for me to slide past any guards and climb the vast staircase up to, where I hope, the orchestrator of this whole revolution will be waiting. I am not disappointed. As I peer around the huge double doors leading into what appears to be an office of some sort, I see an important looking man, sat behind a vast oak desk. I ready myself, then step inside, my hands raised in surrender. I think that the simple act of raising my hands may well have saved me from the bullet that would have doubtless been fired by the imposing man who I failed to spot while conducting my feeble reconnaissance of the office. However, it cannot save me from the butt of his gun colliding against my head with a satisfying crack.

The agony I am experiencing almost makes me reconsider my decision to help the rebels. I do my level best to stifle this pain and make my case to the important looking man sipping wine, but I find myself tied down to a chair with old and worn looking rope, besides he seems to have little interest in my struggles to free myself. The rain has ceased, giving way to a crisp spring evening but droplets still drip down the windows of the room. I cough loudly to get his attention, and he turns to look at me. He seems to be expecting some form of explanation, and I don’t hesitate to oblige. I tell him of my sudden change of heart while out on patrol, of my daring escape from the army and of my intrusion of his quarters. I look up to hear his verdict. He looks decidedly unimpressed. “And you thought it would be a good idea to infiltrate the rebel headquarters, just to enlist in the army?” he enquires, chastisingly.

“I didn’t just come here to enlist,” I tell him annoyed at being patronised,

“I came here because I have access to the most important file the British army possesses.”

“And what might that be?” he asks, beginning to loosen my restraints.

“The entirety of the Britain’s plans for suppressing the Rising.” I state triumphantly.

His eyes seem to bulge from his head, his mouth agape. Without hesitation he calls in the revered Sgt Hanley, the very man who’s gun sent me to the floor.

The defensive perimeter around the colonel’s headquarters is like nothing I’ve ever seen.

There is a ring of armed guards surrounding the building and even more inside. However, Hanley does not seem daunted,

“I’ve come up against worse.” He says gruffly.

“And won?” I enquire nervously.

He refrains from answering and continues on.

Much to my surprise, we make it to the study without any real obstacles. Any guards I’d previously noticed, seemed to disappear as we arrived at their former locations. We approach the heavy doors of Tanner’s study and Hanley pushes them open.

“I’ll wait here,” he mumbles, as sombrely as usual. “Find those files.”

I enter the room and begin my vigorous search. The study is luxurious, full of medals and pictures of Tanner. I have little time to admire the room however. I am only minutes into my search when I hear a floorboard creak behind me. Before I can turn to investigate the noise, for the second time today a sharp pain plagues the back of my head. The accompanying crack confirms my suspicions. As I roll over on the floor I see Hanley standing over me, a wide grin on his face, flanked by imperial soldiers. That’s the last thing I see before everything goes dark.

My dank and dark cell in Kilmainham Gaol is not where I’d dreamed of spending my last few days. I only realised today that I never learned the name of the important man, in the cell beside me. The crack of a rifle tells me I shan’t have much use for his name anymore, even if I knew it. I doubt I’ll have use for any names, not where I’m headed.

A history of her story
8

The Irish photographer who won a Pulitzer, then quit ‘the best job in the world’
Real news has value SUBSCRIBE