Brian Deady: ‘My job is not to be famous, it’s to make stuff’ 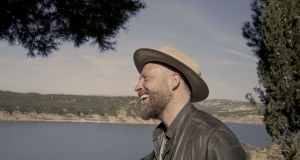 Brian Deady, in remote Andalusia: ‘I didn’t really plan a move at all; it just kind of happened.’

As places to shelter from a global pandemic go, you could do worse than a cave house in remote Andalusia. Lately, Brian Deady has been spending his days with his two dogs, Lucas and Maxine, humming new tracks from his forthcoming third album Yellow Creek and practising character voices from the radio play that he’s in the midst of writing. “I’m going around the house talking to myself all the time,” he explains. “They’re very tolerant.”

It’s a long way from Skibbereen, but the Cork native found himself falling in love with the area north of Malaga – known for its unusual “cave houses” carved into the mountainous landscape when he first visited to shoot a video two years ago.

“It’s pretty much the desert, and I love the space,” he says. “That really does help the creative aspect, so I was very drawn to it. Then in May 2018, I decided okay, I’ll come over here for a few weeks and record Black Diamond – and then I just became more and more enamoured with the place, so I decided to stay because I don’t need to be in Ireland all the time. The lifestyle here suits me. I didn’t really plan a move at all; it just kind of happened.”

Deady’s life has already had its fair share of twists and turns. After independently releasing his excellent debut album Non-Fiction in 2015 – which drew on his troubled childhood, including a spell in foster care – he was praised for his superb authentic soul voice and honest songs. After scoring a radio hit with the song Clap Both My Hands, the album was picked up for a re-release by Universal/Decca Records. Deady was primed for international success but when it didn’t perform as expected, he was unceremoniously dropped from the label.

The move to Spain coincided with the writing of the aforementioned Black Diamond, another considered album of soul-inflected pop and rock songs that saw him dust himself off and prove his worth once again. Now, his third record, Yellow Creek, sees him branch out in another direction, both geographically and musically.

“We had this plan to go to Texas to do some writing and that didn’t work out – so I just decided on a whim to go to Memphis and record an album, as you do,” he laughs. “We booked an analogue studio in downtown Memphis and recorded all to tape. We had a week to do it, so it was a crazy time – but I really wanted to set myself a challenge for that record. I didn’t want to have songs that I’d been working on for months and months; I wanted to get in there with the band and get that ‘live band’ feel on the record.”

There’s something nice about just being put in a situation and going okay, we have to do it now

Writing on the fly was a new experience for Deady, who says the experience was extremely rewarding.

“I had a couple of songs that I just came up with over the past year or two, and I liked them but I didn’t know what to do with them or where to put them. They became the starting songs for the rest of the album,” he says.

“Then maybe about 10 days before I left for Memphis, I just went hell for leather with writing. When I arrived, there were still sections of songs that I had no lyrics for, so it was very off the cuff, but I really enjoyed that. I think most artists are their own worst enemies when it comes to finishing stuff and having to put stuff away. There’s something nice about just being put in a situation and going okay, we have to do it now.

“I used to think that [songwriting] was a lot more about the grind; that you had to spend months working on a song. And you do, sometimes – but it’s good to be able to put yourself in a place where you think whatever comes, comes.”

He says that Yellow Creek has “opened new doors” for what’s possible in his music, adding that his band – who are still based in Ireland, where he travels back to regularly – were kept on their toes during the process, too.

“I was playing songs for them in the studio that they’d never heard before, and they were expected to go in and figure it out,” he laughs. “Sure, it keeps them on their toes; they’re well used to surprises from me at this stage.”

His lyric-writing also changed this time around, with more of an emphasis on storytelling, rather than basing songs on his own life. The title track, for example, pitches the tale of a Native American character called Raven Feather and his love. Others, like the rock ‘n’ roll swagger of Daddy’s Cigarettes, retain a nostalgic tone.

“It got to a point where I’d done Non-Fiction and Black Diamond, and it felt like I wanted to try something different, in terms of the narratives I used. I just wanted to be able to walk around in other people’s skin . . . actually, that sounds a bit creepy, doesn’t it? No, I didn’t want to do that,” he says, chuckling.

“But I just wanted to have fun through other characters, and that’s what I did. It’s great to be able to put yourself out of the way of things, and just see what’s there. What’s this story going on in my head? Who is this character? Where are they going? Those things have always come naturally to me, but I never knew how to unlock them or apply them to a song format.”

But the most important thing is that I’m creating, which is really my job. My job is not to be famous; it’s to make stuff

That has impacted Deady’s other creative work, too – like the aforementioned radio play that he is writing and hopes to eventually adapt as a stage musical. “It’s centred on this cowboy character who lives out in the desert, which is pretty much what I’m doing anyway,” he says.

And despite Yellow Creek’s vignette-style approach, he agrees there is an interconnecting theme between each of its nine songs. “They’re all somehow linked into journey and change,” he says. “Finding yourself in new landscapes, and seeing new things – and how seeing things through the eyes of new characters can change your perspective on things.”

He reflects upon his own journey, which has seen him maintain something of a “best-kept secret” profile for the past five years or more. He insists he is “over” the label trauma from several years ago, although the lampooning one-man sketches he has been uploading to his Facebook page – where he plays a Nathan Barley-style music industry figure called Martin Before – arguably seem like his way of sticking the boot in. “He is a bit of a vehicle for all the nonsense in the music business,” he says. “He kind of highlights it. He’s full of shit like, but there are some interesting points there.”

He stops to consider his accidental “underrated and underestimated” designation. “I think I went through a phase of frustration and feeling like I wasn’t making a dent in [the industry]. But that can be very stifling, too, that feeling. I just felt like I wanted to work and be committed to working, and eventually something will happen.

“But the most important thing is that I’m creating, which is really my job. My job is not to be famous; it’s to make stuff. And I think that was the thing that led me through a lot of that frustration.” He pauses for a beat before deadpanning: “But it is kind of shit I’m not famous, like.”

For now, Deady is still doing everything himself, including management and PR. He is continuing to plot world domination from his Spanish cave house – and he’s fine with that, for now. More importantly, Yellow Creek has opened up a new world for him.

“I’ve started to discover skills that I’ve wanted to try but couldn’t quite connect the dots,” he says. “I’ve realised a lot about storytelling, and where you can go with creativity.”

And if it still doesn’t work out? At least he hasn’t lost his dark sense of humour in these strange times. “Ah sure look, if the album flops, I can blame coronavirus,” he says, smiling. “It’s a brilliant deflection tactic.”