How to become wise: It takes more than Googling

The primary location of wisdom is ‘in a person, not a book’, says Prof Paul O’Grady 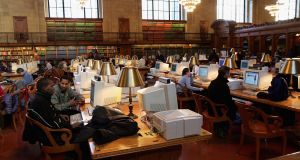 ‘Wisdom is applied, personal and not hypothetical and hence cannot be stored in a library.’ Photograpyh: Spencer Platt/Getty Images

If you’re still feeling numb after the political events of 2017 take note of Ludwig Wittgenstein’s advice: “Just improve yourself; that is all you can do to improve the world.”

The Austrian philosopher was not, it must be said, advocating you take out a gym membership or sign up for a course in computer coding. I mean, looking after your health and learning practical skills is all well and good but it’s a very limited view of self-improvement, isn’t it? (“Whoop-de-doo” the Ancient Greeks would have said to anyone bragging about their split times on Strava.)

For the great philosophers, self-improvement was a moral and intellectual enterprise. For Diogenes, that meant learning to live with fewer possessions. For Epictetus, it meant figuring out what’s outside of your control and then accepting it. For Aristotle, it meant cultivating virtues, friendships and political nous.

If there was one common goal for these thinkers it was the achievement of wisdom, a rather slippery concept then as it is today. Can you become wise by Googling stuff, one might ask? Or is wisdom something that comes with age?

Thankfully, Prof Paul O’Grady, head of philosophy at Trinity College Dublin, is on hand with an answer, describing wisdom as “a personal appreciation of how ideas contribute to living well”.

O’Grady speaks to Unthinkable ahead of a talk he is giving on the nature of wisdom to open TCD’s latest philosophical public lecture series, which starts next Tuesday.

How does knowledge differ from wisdom?

“Aristotle distinguished many of these in antiquity, but the modern tendency has been to think of knowledge on a scientific model with empirical evidence as the gold standard.

“Recent writers on wisdom have challenged this separation between the theoretical and the practical. They suggest that wisdom is a form of knowledge that seeks to integrate the different elements of human life and they do so in the recognition of a great deal of diversity of opinion.

“There is an interconnection between our worldviews, actions, emotions and values. Wisdom is a way of reflecting on this interconnection, so it includes both theoretical and practical elements.

“One further important difference is that wisdom is applied, personal and not hypothetical and hence cannot be stored in a library. It exists in individuals who may well use libraries as a way of supporting their wisdom, but its primary location is in a person, not a book. And wisdom also exists in degrees, it is not an all or nothing phenomenon. Some people exhibit lots of it, other less so.”

For Socrates, wisdom was a kind of stripping away of false knowledge; it was about becoming more aware of one’s own ignorance. Why would anyone want to be wise under those circumstances?

“If wisdom were only this, there would clearly be a problem. All ignorant people who embraced their ignorance would thereby be wise.

“However, as a stage on the path to becoming wise, awareness of our limitations seems essential. It requires an accurate self-assessment. What are our strengths and weaknesses? What are we capable of? What are realistic goals? Especially an awareness of intellectual overreaching or of inappropriate methods seems significant nowadays.

“Aristotle noted that applying standards of precision appropriate to mathematics to matters which do not admit of such precision, matters that requires judgment, weighing up or sensitivity to context, is a kind of intellectual error. That’s why interdisciplinary or multidisciplinary approaches to problems can be so fruitful.”

There is still value in asking what is goodness, what is knowledge, what is real?

Is there value in asking questions that can’t be answered?

“The history of philosophy might be thought of as just such a process of asking these questions. When means are discovered of coming up with definitive testable answers to these questions, a new discipline emerged, whether physics, economics, psychology, sociology, cognitive science or linguistics.

“There still is a value in asking these deep recurring questions which philosophers puzzle over, for example - what is goodness, what is knowledge, what is real? And answers do emerge, but ones which are contested and debated and which do not command universal assent in the manner of mathematics or natural science.

“But what arises from the process of asking and answering these questions is greater clarity, deeper insight and richer conceptual appreciation of the deep structures of human thinking. Also rather than competing with science, this philosophical approach is complementary to it.

“Last summer in New York I attended a workshop of philosophers and psychologists who discussed their different approaches and questions in relation to the topic of wisdom. The psychologists wanted a model from which they could make measurements or predictions. The philosophers assessed the coherence or explanatory power of the models, drawing on various traditions, including Asian philosophy where wisdom is a significant topic.

“Much of the work lay in making sense of our different interests and methods and understanding that they supported each other.”

What’s the most important question one should ask?

“How should a person live his or her life?”

* TCD’s public lecture series on the “The big questions in philosophy”, starts on Tuesday, 16th January 2018 from 7.30 pm to 9 pm, in the Uí Chadhain theatre. The series runs for 11 weeks, each Tuesday, priced €100 (€50 concession). www.tcd.ie/philosophy/events