U2, bad sex and Baileys: the biggest 2017 culture stories on irishtimes.com

Readers were also interested in Michael Colgan, Vincent Hanley and maps of Ireland 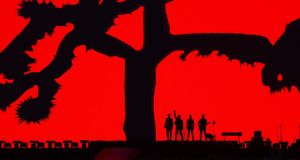 U2 performing at Croke Park in July. Brian Boyd’s report detailing the band was planning to breathe new life into their 1987 album The Joshua Tree was the fifth most read culture article on irishtimes.com. Photograph: Cyril Byrne

1. Bad sex in the movies: from Top Gun to Fifty Shades

This is the most read culture story on irishtimes.com for 2017, and by quite some distance. I hope you are all proud of yourselves. Donald Clarke’s story from mid-February was linked to the St Valentine’s Day release of Fifty Shades Darker. In the article, he pondered some of the terrible sex scenes that have been unleashed on our screens by Hollywood, and wondered if Fifty Shades would continue this unlovely tradition.

The article, while certainly witty and worth reading, seems to have benefited from furious click-throughs based on people typing certain words from the headline into Google. This story seems to have struck a particular chord with readers in India and Pakistan. We have no clear idea why. Though we suspect that they might not quite have got what they wanted after clicking on the link.

In this article, this writer and Conor Gallagher detailed a series of allegations about the conduct of the former director of the Gate Theatre, Michael Colgan. The theatre has since set up its own independent investigation, overseen by Gaye Cunningham of the Workplace Relations Commission, the results of which will be presented to the Gate board in January 2018.

3. The glamorous life and painful last days of Vincent Hanley

In this extraordinary story by Una Mullally, friends and colleagues of TV presenter “Fab Vinny” Hanley recalled his vivacious personality, 30 years after his death from Aids, and the transformative effect he had on Irish media. The article was also a revealing portrait of how Aids and HIV decimated Ireland’s gay community in the 1980s, and the psychological impact it would have for years afterwards.

In 1973, while working for International Distillers & Vintners, David Gluckman invented a drink in response to a brief from the company. “The initial thought behind Baileys Irish Cream took about 30 seconds. In another 45 minutes the idea was formed. A decade of experience kicked in and delivered a great idea.” Baileys was born, and since then the company has sold more than 1.25 billion bottles. For this trouble, Gluckman got paid the princely sum of £3,000. This was an exclusive extract from his book, That Sh*t Will Never Sell.

5. U2 to outline tour dates for The Joshua Tree on Monday

At the beginning of January, word came from Brian Boyd that U2 were planning to go back on the road, not on the basis of new material but to breathe new life in their 1987 album The Joshua Tree. The response was feverish, and their two dates at Croke Park in July went down a storm with fans and critics. The response to their latest album, Songs of Experience, has proven more divisive, but the powerful Joshua Tree seemed freshly burnished in the modern political context.

RTÉ’s flagship entertainment show doesn’t have to work particularly hard to get a reaction from the general population. But when it showed a map of Ireland, illustrating HSE data on incidences of cancer, which left out the six counties of Northern Ireland, outrage came swiftly to the boil. Maybe it was an early, latent reaction to what a hard Border might actually look like. Maybe it was because Mary Lou MacDonald and Mark Durkan, among others, were quick to jump on Twitter and whip this storm right up in its teacup. If you were offended by this blip by the Late Late, one can only imagine what you made of Channel 4’s recent news report, which asked British people to illustrate where the Irish Border actually is.

Few pop artists seemed more conflicted in 2017 than Justin Bieber. The many spats, the endless tantrums, and the court appearances paint a fairly dark picture of a celebrity for whom fame has become a trap. And at this show in the RDS in June, Bieber seemed barely interested in being on stage. When he rolled out the bangers, wrote Jennifer Gannon, he gave thrilling flashes of just how good a performer he is. But for the most part, it was an uncomfortable set, never more so than when Bieber was raised over the crowd while having an amateur bash on a drum kit, like “a Little Lord Fauntleroy, a child attempting to impress his mother on Christmas morning”.

8. This is Ireland: New campaign launched for St. Patrick’s Day

A host of Ireland’s artists came together to contribute to this promotional film under the aegis of Creative Ireland. The video re-launched ireland.ie as a global promotional tool for the country, after the success of the 1916 commemorative programmes. Among those stoking the fires of our national pride were director Lenny Abrahamson, chef Ruairí de Blacam, surfer Easkey Britton, artist Clare Langan, poet Nuala Ní Dhomhnaill, the outgoing Laureate for Irish Fiction Anne Enright, choreographer Fearghus Ó Conchúir, musician Caoimhín Ó Raghallaigh, playwright Enda Walsh and composer Bill Whelan. Creative Ireland is still finding its feet, but there were few who didn’t feel a jolt of pride looking at this cultural testament to how we’re a great little country altogether.

9. My Ireland: ‘Getting the ride in Copper Face Jacks and women sailing to Holyhead’

In February, spoken word artist Stephen James Smith released a new piece and an accompanying video made by Myles O’Reilly, which was commissioned by the St Patrick’s Festival as a “celebratory narrative” of Ireland in the modern day. It included everything from Zig & Zag to Savita Halappanavar, Reeling In The Years to the Magdalene laundries. The video also got some help from Conor O’Brien (Villagers), Colm Mac Con Iomaire and Loah, Saint Sister, Eithne Ní Chatháin aka Inni-K and Ye Vagabonds.

10. Brexit: “Hands off Donegal and give us our six counties back”

Once again, the Border provoked a storm of protest. In March, it was those well-known royal apologists the Guardian who were mangling our national boundaries. An article by Tanya Sweeney looked at how the Guardian had, on its front cover, illustrated how the EU might look without Britain.

It used a jigsaw style overlay, but left out the UK and Northern Ireland. The relatively clunky borders of the jigsaw pieces, though, are not Irish Border shaped, so it looked as if the Guardian had lain claim to Dundalk, Donegal, Wicklow, Cavan and Arklow, while leaving the Republic with the consolation prizes of Newry, south Tyrone and a small sliver of south Co Down.

In the process, the newspaper also managed to annoy parts of France and chunks of eastern Europe. Donegal TD Pearse Doherty was first out of the gate with his reaction: “Hands off Donegal and give us our six counties back,” he tweeted.

11. Inglorious Empire: what the British did to India

As Diarmaid Ferriter noted in his review of Shashi Tharoor’s book on the impact of Britain on India, according to a YouGov poll in 2014 “almost 60 per cent of Britons were proud of the British Empire and almost 50 per cent thought it had made the colonies better off”. The book may have seemed somewhat rushed, with Ferriter claiming it made quite a few sweeping assertions, but that didn’t stop this particular piece being the most read book review on irishtimes.com/culture in 2017.

12. Every day, tell your child you love them, read to them and take them for a walk

In November, author Benji Bennett wrote about his grief over the death of his son Adam, and how it set him on a fresh path. Now his aim is quite simple. “As I have said a thousand times to thousands of people on my travels over the past 10 years, if you read to them, tell them you love them and take them outdoors for a walk every day you are doing something right.”