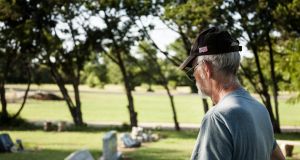 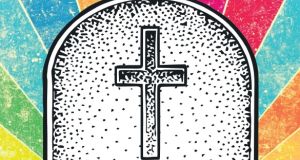 “Did I tell you Steve died last week? They’re sayin’ it was a heart attack. I guess all them drive-throughs caught up with him.” He managed a weak smile before his face turned paler. “I just hope that if I die, I ain’t lonely like him. I thought he’d be the last of us to go, but it’s just me here. Sure does feel strange that he ain’t around anymore. We were together almost every day since high school, best man at his wedding. Steve was a real great guy. I can’t do nothin’ to thank him now. I ain’t even strong enough to carry the coffin.”

He cleared his throat and wiped his eyes hurriedly. “You know his kids, right? There’s Adam, and that girl, I can’t remember her name. They’ll be at the funeral tomorrow. Adam’s some hotshot lawyer now, and they both got their own kids, can you believe it? Seems like yesterday we were young with family on our minds . . .”

The words lingered in the air like a bad smell before Abe broke the silence again. “I forgot your paper today. So you’re gonna have to get my news this week. There’s never much of a difference most of the time with the big stuff. Sometimes I’d say I mention more important things than the TV networks. It’s always the same, y’know? Some big shot said something he shouldn’t have, we’re fightin’ wars that don’t make no sense, and I still can’t believe that Elvis is dead. I thought, when I read the news, that it was gonna be the same as it’s always been. But they’ve done somethin’ really great. I wish you’d been around to see it, I know it woulda made you happy.” His eyes shone with excitement.

“The president says two guys, two guys like us, Charlie, can get married.” Abe stared expectantly at the grave like he expected 60 years to be undone before his eyes. “If it wasn’t for my knee, I coulda jumped for joy.” The lopsided grin made Abe look almost like a young man again.

“Imagine that, Angel. How many guys are goin’ out in a better world than we ever got? We coulda had that dumb wedding you were always talkin’ about. It got me thinkin’about all that mushy stuff you liked . . .” He caught himself wondering how different his life would have been if this had happened sooner, if he’d been allowed to spend his life with someone that made him happy.

For that brief, fleeting moment, the wedding wasn’t so dumb. “We coulda done it, everything we talked about . . .” His face darkened, the lines around his eyes sagging. “Dammit, Charlie, why the hell did you have to be so goddamn selfish? Why would you do this to yourself, to your friends, to me? If you’d held on jus’ a little longer, we coulda been together. Isn’t that what you wanted? It was all I ever needed. I told you, you shouldn’t’ve cared what anyone thought of you, of us. I tried showin’ you that.” He stood and stared down at the grave.

“The real stinger is that if you were here, we coulda gone down to the city and got married today. Just yesterday, I was walkin’ downtown. I saw two guys that looked like we did, holdin’ hands, like regular people. No one said nothin’, no one did nothin’, these two fellas were just. . . existin’. I’m gonna spend whatever life I got left wonderin’ what we mighta had, and every tear, every stupid sleepless night, is all your fault you . . .”

The lump in his throat swallowed his words as these long-buried thoughts spun around in his head. “You think you’re the only one that had problems, that you’re the only guy who didn’t wake up every morning scared? Most days I didn’t wanna be here either. I loved you so much I forgot what it was like to hate myself. You’re the only thing I gave a damn about, Charlie. I thought you gave a damn about me too . . .” His voice grew inaudible through the sobs.

“I’m sorry I couldn’t fix things. I never wanted this. You deserved the world and I tried so hard, but I’m just one man. I let you down. I’d give anything to do it again. I promise, this time, I swear, I’d fix things.” Abe knew these apologies were like screaming to an empty world. It didn’t matter how many times you said sorry if no one was listening anymore.

“This ain’t fair!” He roared to the sky. “You give my angel back, you hear?” He knew that nobody could ever care about someone like him, who went against everything this God he was pleading with stood for. He was a lost old man yelling at nothing. “I can’t do this, not on my own, please.” He sighed, falling to his knees with exhaustion.

“Charlie I know you had it bad, how they told us we were going to Hell. We were just kids that thought we could change those backwards people. And if it came to it, Angel, I’d go to Hell for you, but I’ll never get what was so sinful about two people bein’ in love.”

He bowed his head as he knelt on the grass. For the first time ever, Abe closed his eyes and prayed. “I never thought I’d be gettin’ down to say my prayers. Fifty years ago, if you’d told me where I’d be right now I woulda spat straight in your eye, but you got me, right at the end. That’s where it catches up with the best of us. I don’t know ‘Hail Mary’ or nothin’, but I think I’d like to try this whole prayin’ thing, just once before I bite it. So, Mr Big Shot God, you got time for a lonely old sinner? I wanna say thanks, for everything. For my health, for the roof over my head, for keeping me sane most of the time. Most important, I wanna thank you for Charlie. I ain’t a smart man, and I don’t got time to start now, but even I can tell that Charlie was the best thing you ever gave me. I made a million mistakes in my life. Choosing Charlie wasn’t one of ’em. I think you knew when you thought him up or whatever, that he was too good for here. I kinda knew too. I’m just so goddamn thankful I got him at all. He’s the one thing I got right, you can probably tell. I hope you’re taking real special care of my angel, wherever he is. He always had a soft spot for this God stuff. And if you see him, could you do me a favour? Tell him that I love him.”

Abe let time pass in silence. Even if he wasn’t fantastically intelligent, he knew when enough was enough. He finally had the strength to stand up, patting the top of the headstone. “Don’t go getting yourself into any trouble. I’ll see you real soon, Angel.” He turned his back on the grave and hobbled towards the gates.

If you found yourself in Trinity Graveyard today, you’d see Charlie’s plot deteriorating like everybody else’s. The headstone’s writing is becoming less visible. Daffodils no longer grace the ground. The only evidence that anyone ever visited is a carving at the base of the stone.

To passers-by, it looks like graffiti, they would never pause their lives to read what’s etched upon it.