Sharp review: For those female US writers ‘too smart for their own good’

Some strained handovers, but Michelle Dean has assembled an impressive cast 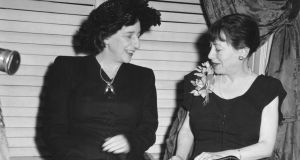 Lillian Hellman with Dorothy Parker, both of whom feature in “Sharp”.

Book Title:
Sharp: The Women Who Made an Art of Having an Opinion

“The forward march of American literature is usually chronicled by way of its male novelists.” Though men outnumbered women, literary critic Michelle Dean believes that when it comes to the crucial matter of producing work worth remembering, “the women were right up to par – and often beyond it”. The stellar cast she assembles in Sharp doesn’t so much prove her claim, but live and breathe it: Dorothy Parker, Rebecca West, Hannah Arendt, Mary McCarthy, Susan Sontag, Pauline Kael, Joan Didion, Nora Ephron, Renata Adler and Janet Malcolm, with Zora Neale Hurston and Lillian Hellman in supporting roles. Ten writers who in varying ways shaped opinion on politics, world events and culture.

With a chapter per subject, Sharp examines chronologically how hard-won a female seat at the man’s table is, then asks what responsibility a woman has to those coming up behind her. Although neither claimed to recall it, Mary McCarthy is supposed to have greeted Susan Sontag with, “I hear you’re the new me”. Professional and personal lives are laid bare, with enjoyable detours through alliances (such as Arendt and Adler) and battles (McCarthy and Hellman). One of the book’s many joys is the invisible baton handed from chapter to chapter, as each biography gets woven into the next. The light this lets in illuminates the real world in which writers live and work. As a result, relationships between her subjects and their influence – or lack of – on each other make for fascinating reading. Describing Arendt’s obsession with 18th-century salonniére Rahel Varnhagen, Dean adds, “in this, she was somewhat unique among thinking women of her era. Most were afraid to admit any clear debt to women”. Later, she sounds almost rueful: “We’re all stuck with each other, stuck with the history of those who’ve preceded us.” In the chapter on Nora Ephron, Dean refers to Ephron’s critique of writer Alix Kates Shulman for her insistence that beauty was its own form of suffering, yet notes that Ephron’s article ended on a conciliatory note: “Like all things about liberation, sisterhood is difficult.”

The male gaze on female professional relationships receives a few well-aimed swipes. When Lillian Hellman and Mary McCarthy have a very public argument, Norman Mailer pops up to call them both “splendid writers”. “No one listened to him,” is Dean’s acerbic remark. Having described the rollicking a teenage Rebecca West gave HG Wells in the Freewoman, Dean suggests that their subsequent first meeting is “possibly the only time in history that future lovers have met when one gave the other an abysmal book review”. She also writes of West, “The notion that so intelligent a woman might have been undone by romantic rejection is not palatable to the feminism of our era”.

Occasionally the handover from one subject to the next is strained: Joan Didion is followed by Nora Ephron, but the baton is passed via Didion’s pal Carl Bernstein, whose infidelity ended his four-year marriage to Ephron. Didion’s own story screeches to a halt as her chapter concludes, “But things with Ephron and Bernstein would not go very well in the end”.

Though the style can become overly conversational (“the Courier stiffed Hurston out of $800”), and indulges in unnecessary mind-reading, (“The depth of her [Arendt’s] relationship with Heidegger did not become public knowledge until after her death. But she must have been thinking of him.”) Sharp has the accessible, lively tone of a sure-fire hit. When we learn that through her screenwriter parents Nora Ephron is the only subject with a direct connection to Dorothy Parker, we get the sense that for Dean, Dorothy Parker is less the first bead in a string and more the pulse of the book.

The New York Times argued that Dean ought to have begun with Virginia Woolf and included Camille Paglia – and I’d like to have seen Adrienne Rich and Cynthia Heimel – yet Dorothy Parker seems the perfect opening act for a collection with such a New York bias. Arguing the omissions tells us that Dean had more than enough candidates to choose from. Who would be cast in a women-of-opinion book on this side of the Atlantic? Germaine Greer, early-mid ‘80s Julie Burchill, Jeanette Winterson, our own Catriona Crowe? Dean acknowledges that any selection process is problematic: “I can imagine Hannah Arendt haranguing me for placing her work in the context of her womanhood at all.”

Dean’s selection was made “under the sign of a compliment that every one of them received in their lives: They were called sharp”, which, given the extent of her research, sounds too light, almost flippant. For such a rich stew of biography, literary criticism, and cultural history, Sharp’s dedication reads truer to its subjects: “For every person who’s ever been told she’s too smart for her own good.”